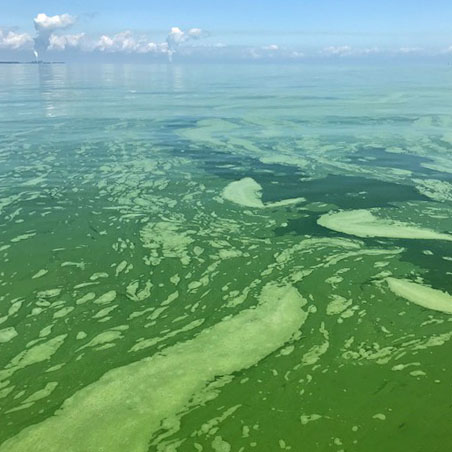 Researchers have identified many factors that influence the timing and distribution of Lake Erie’s HABs. Intensity and timing of spring rainstorms is part of the puzzle, as is the amount of algae-feeding nitrogen and phosphorus traveling into the lake from nearby rivers.

And while the size and location of Lake Erie’s HABs change every year, the fluctuating intensity of the toxic microcystin the blooming algae produce doesn’t clearly correlate. Figuring out which factors influence bloom toxicity would help Lake Erie beach managers and drinking water suppliers start predicting — and mitigating — the harmful effects of these annual blooms.

FROM LAKE TO LAB 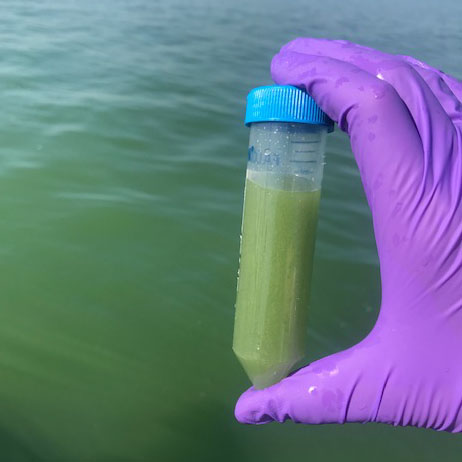 Gregory Dick, a professor at the University of Michigan, is leading a Michigan Sea Grant-funded project attempting to identify environmental factors that influence Microcystis toxicity. Dick is also the director of the NOAA-sponsored Cooperative Institute for Great Lakes Research (CIGLR).

Dick’s project is supported as part of Michigan Sea Grant’s 2020-2022 research funding cycle. Dick and his team of PhD students, undergraduates, and postdoctoral researchers are exposing samples of Lake Erie Microcystis to environmental conditions that usually fluctuate during a bloom season. By manipulating factors such as light, temperature, pH, and nitrogen availability, the team can track corresponding changes in microcystin production. The results can then feed into computer models that analyze previous bloom conditions in order to predict future ones. The ultimate goal: increase understanding of Microcystis dynamics and help chart a course toward managing and even eliminating Lake Erie’s algal troubles.

“Microcystis is an interesting example of intraspecies diversity,” notes Dick. That’s putting it mildly. A sample of water from a Lake Erie algal bloom contains plenty of microbial species, but nearly all the troublesome activity comes from Microcystis aeruginosa. And within that single species lies a dizzying array of genetic variety.

Microcystis has many traits that help free-floating cells and colonies (blobs of reproducing cells) get nutrients and defend against predators. Two Microcystis cells can look nearly identical, even down to their DNA, but one produces microcystin toxin while the other doesn’t. Or they both produce toxic molecules that have different structures and interact differently with human or animal cells. One colony might thrive when water temperatures rise, while another succeeds best when Lake Erie’s pH drops. Microcystis aeruginosa variants with similar characteristics are grouped together as “strains.”

These differences don’t only play out in the lake. “Bacteria are finicky in the lab,” says Dick. It can be tricky to predict how strains will react when brought indoors. He notes that when microbiologists grow bacteria in the lab, they often wind up with cultures full of “weeds,” or species and strains that happen to thrive under lab conditions but might not be champions back in their natural habitat. 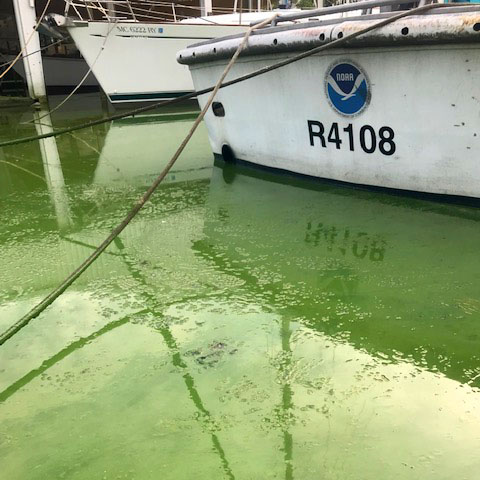 The variety within and between strains isn’t necessarily stable, either. In Lake Erie, individual microscopic Microcystis cells tend to grow into colonies. These blobs can contain tens of thousands of cells and are often visible to the naked eye. But cells in colonies tend to grow more slowly than free-floating cells. So samples of colonies relatively fresh from the lake might take longer to grow in the lab, slowing down Dick’s experiments.

However, Microcystis cells generally have quick reproductive cycles that make it easy to adapt to new conditions across generations. So strains that have been growing in the lab for several years can look quite different than strains fresh from the lake. They usually lose their colony-forming tendencies and begin to grow more quickly as free-floating individuals.

Dick says that most studies on Microcystis currently rely on these “lab rats,” strains that have been raised indoors for the better part of a decade. Lab rat Microcystis grows differently and even releases different varieties of microcystin molecules. This makes it challenging to gauge whether experimental results actually reflect the reality of life in Lake Erie or any other global lake affected by Microcystis blooms.

The implications are critical. Climate change is driving up algal bloom risk around the world, and Microcystis is becoming a hot research topic in many labs. Researchers relying on lab rat cultures will find themselves at a disadvantage if they can’t trust their samples to paint an accurate picture of what’s happening off-shore. With their collection of relatively fresh Lake Erie cultures, Dick and his colleagues have a unique resource.

IT’S IN THE GENES

Microcystis diversity doesn’t emerge from a vacuum. An important element of Dick’s work is teasing out the genetic variation underpinning the traits he and his team are seeing in the lab.

They started by extracting DNA from over 300 Microcystis samples collected from Lake Erie since 2015. Cataloging the genetic sequences represented within each sample has been a laborious process generating massive quantities of data. But it has yielded a library of genetic profiles that can start shedding light on the differences and similarities among strains. 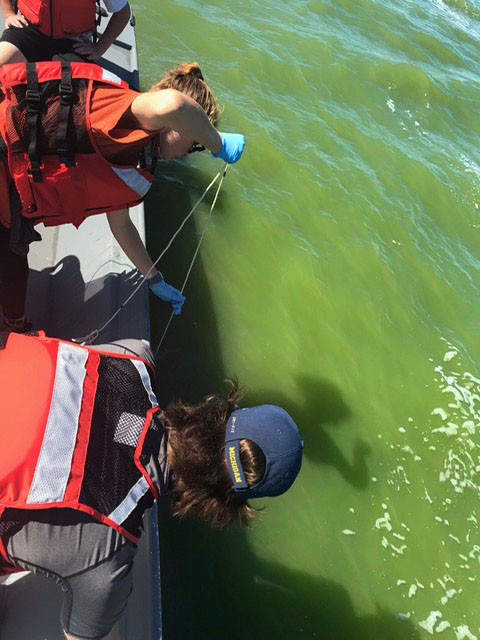 Mapping entire genetic profiles is useful but eats up valuable time and resources. They’re making good progress toward their next goal: identifying a set of genetic markers that consistently distinguish one strain from another. That way, they can eventually analyze a sample by using those genetic markers as a shorthand instead of cataloging entire genetic profiles. Dick and his team can assess the markers in field samples from Lake Erie to take a census of the microbial diversity as a whole, or to check whether specific strains are present.

Dick and his research team aren’t the only University of Michigan scientists exploring Microcystis dynamics and genetics. Among the others are two additional Michigan Sea Grant-funded project teams, both part of the new 2022-2024 research cycle. Vincent Denef, an associate professor in the Department of Ecology and Evolutionary Biology, and Melissa Duhaime, an assistant professor in the same department, are leading a project that will link Microcystis genetic variation with its ability to defend against predators and viruses (read an overview of their project). Genomic sequencing also plays a role for Nikesh Dahal, PhD candidate in Ecology and Evolutionary Biology, who will investigate how predation by invasive mussels alters the structure and function of microbial communities in Lake Erie and Lake Huron (read an overview of his project).

As these researchers collaboratively build and learn from their library of Microcystis genetic profiles and pure sample cultures from Lake Erie, other labs are beginning to take notice. The University of Michigan scientists are sending Microcystis cultures to scientists at institutions around the country — including the University of Toledo, University of Tennessee, and Lawrence Livermore and Lawrence Berkeley National Laboratories. By making their cultures and genetic profiles available for widespread use, Dick and his collaborators are stimulating research into this rising global challenge.

THE ROAD SO FAR 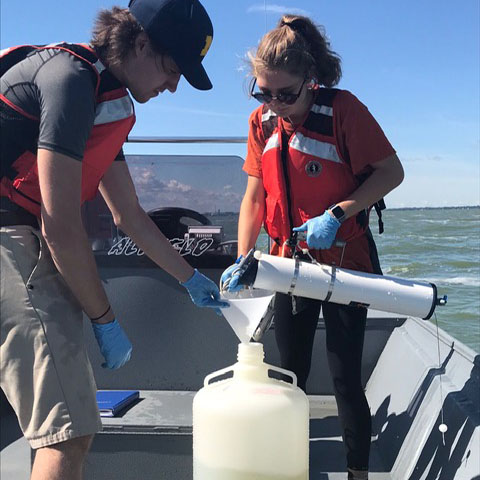 In their own lab, Dick and his research crew are still busy generating and analyzing data about Microcystis behavior and toxicity. As they hypothesized, initial studies show some differences in the ways Microcystis strains react to changing light, temperature, and pH. So far, it seems that environmental conditions in Lake Erie might be helping select which strains dominate in a bloom. The team is also making good progress toward characterizing the many shapes and structures of microcystin that might appear in an algal bloom.

They’re also seeing validation that the cultured Microcystis in their Lake Erie lab samples are still quite representative of the organisms found in fresh lakewater, instead of being dominated by lab-loving “weed” strains. This underscores the value of their culture collection as a resource for algae researchers around the country.

Michigan Sea Grant is proud to support Great Lakes research projects at colleges and universities around the state. Visit our website to explore the projects we’re currently funding.