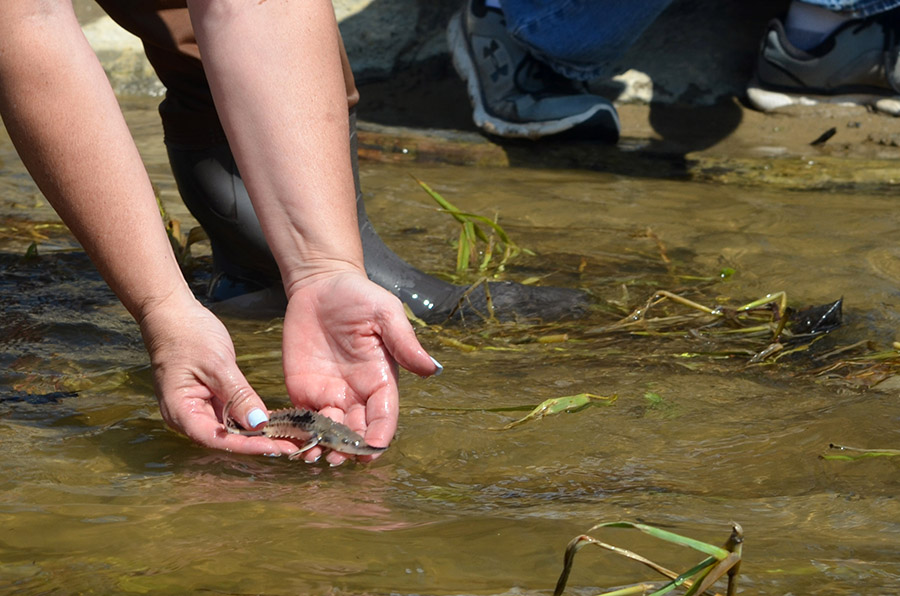 The Great Lakes are integral to the economic and cultural vitality of Michigan. However, their health is threatened by toxic contaminants, outdated sewage infrastructure, invasive species, and a lack of coordinated conservation efforts. Restoration is critical to keeping the region environmentally and economically viable.

Restoration projects throughout the region are targeted to improve fishing, birding, hunting, and swimming for Michigan residents and tourists. In addition, restoration efforts can raise property values, reduce costs of municipal water treatment, and contribute to a higher quality of life. 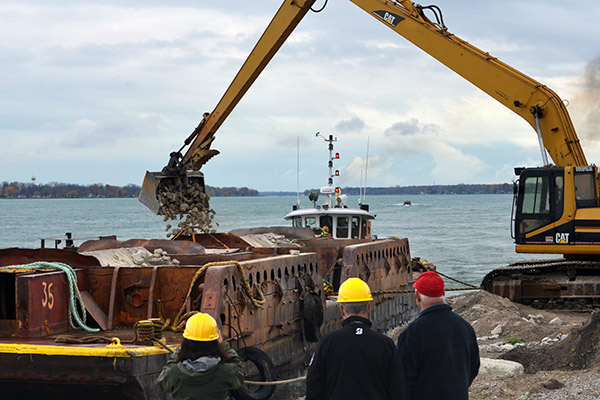 Many fish seek out rocky areas in fast-flowing currents in order to deposit their eggs during spawning season. However, many natural limestone reefs and rocky areas have been destroyed or made inaccessible due to dams, dredging, sedimentation, and shipping channel construction. This is particularly evident in southeast Michigan, including Saginaw Bay, the St. Clair River, and the Detroit River, which once served as vital spawning habitat for species like the threatened lake sturgeon.

Despite massive population declines, the waterways connecting Lake Huron and Lake Erie continue to support the largest remaining population of lake sturgeon in the Great Lakes. Restoration efforts in these rivers are now helping rebuild native fish communities throughout the Great Lakes region.

One major restoration strategy is the creation of spawning reefs. Made of limestone cobble, these low rocky beds are strategically located in the St. Clair and Detroit rivers and Saginaw Bay based on studies of fish populations, models of river dynamics, and lessons learned from previous projects. Lake sturgeon, walleye, and other native fish can lay eggs in the spaces between the rocks, where the eggs and newly hatched fish can be protected from sediment, strong currents, and predators. Research teams monitor fish activity on the new reefs to determine whether the reefs are promoting successful reproduction of the desired fish species.

Since the early 2000s, Michigan Sea Grant and a diverse team of partners have been working to build spawning reefs, teach the public about lake sturgeon and other important native fish, and monitor the success of the new reefs.

Many Great Lakes fish populations have been harmed by pollution, habitat loss, invasive species, and other factors. Stocking is one strategy for boosting low population numbers with healthy young individuals. Many species of fish are raised in government hatcheries until they are old enough to survive on their own; they are then released into lakes, rivers, and streams. Many stocked fish are marked with tags, tattoos, or clipped fins to enable researchers to track the spread and success of stocked fish. The end goal is to see enough stocked fish reproducing naturally that the population is able to recover and no longer needs supplemental stocking.

Stocking requires a careful assessment of general ecosystem health. Managers must be aware of all factors that will affect the success of stocked fish, including interactions with the threats that initially damaged the population. For example, five species of salmon and trout support a world-class recreational fishery in Lake Michigan. Stocking has played an important role in maintaining the balance between predators and forage fish, such as the non-native alewife, since the late 1960s. If too many salmon and trout are in the lake, forage fish decline and salmon starve or fall prey to disease. If too few salmon and trout are in the lake, the non-native alewife could foul beaches and affect native species populations.

Many communities in Michigan are struggling to find new uses for abandoned or damaged properties, such as old factories and commercial buildings. The decline of the manufacturing industry has left many properties in Michigan with dilapidated buildings, hazardous substances, and environmental contamination. Allowing facilities to fall into disrepair can threaten public health, water quality, and the economic vitality of communities. Properties where redevelopment is hindered by the presence or potential presence of hazardous substances are considered brownfields.

Reusing these brownfield sites provides an opportunity to improve neighborhoods and diversify local economies. However, redevelopment can be a complicated and expensive process. In Michigan, properties that are badly damaged or functionally obsolete, with or without environmental contamination, can receive state incentives for brownfield remediation and redevelopment.

In the late 2000s, Michigan Sea Grant supported a research team to evaluate the challenges and benefits of reusing coastal brownfields and to identify strategies for improving redevelopment. Find their research report below.