“It was very cute and very slimy.”

That was one child’s reaction to holding a juvenile lake sturgeon at a riverside release event on August 19, 2022. That day, several hundred people met lake sturgeon up close while sending them into their new homes in the Saginaw Bay watershed.

Lake sturgeon are fish native to the Great Lakes and connected rivers. Juvenile lake sturgeon are charismatic little creatures about six inches long, with upturned pointed snouts and small ridges along their spines. These palm-sized juveniles will mature in 15-20 years and can reach 100 pounds and 3-6 feet in length. Lake sturgeon can survive for more than 100 years.

These giant, ancient fish were once abundant in the Great Lakes and were an important food source and cultural touchstone for Indigenous people in the region. Unfortunately, European settlers changed waterways and landscapes in ways that harmed lake sturgeon populations.

“Today, these prehistoric species are threatened, due to human impacts like damming our rivers and overfishing,” said Meaghan Gass, Michigan Sea Grant Extension educator for the Saginaw Bay region. “But now, with all the great restoration work that has been done here in the Saginaw Bay watershed, from removing dams to restoring water quality, we’re able to restore sturgeon back here.”

Many partners in the region have committed to a 20-year plan for restoring Saginaw Bay’s lake sturgeon populations. Annual riverside releases are a big step toward that goal. 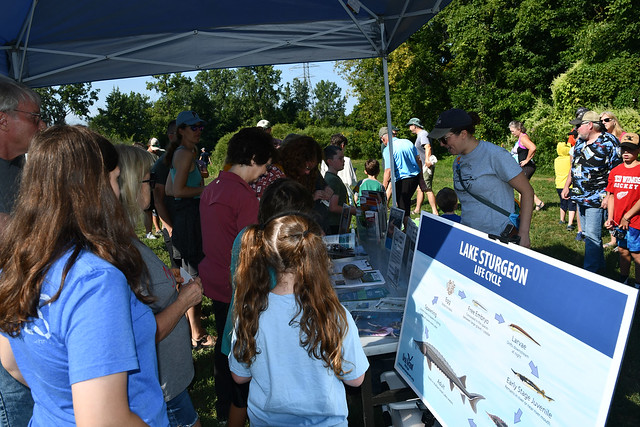 Public release events were held on the Tittabawassee River in Midland, the Shiawassee River in Chesaning, and the Cass River in Frankenmuth. An additional release, not open to the public, was held at the Flint River in Flint.

About 200 people attended at least one of the day’s events, with around 100 fish sent home at each location. Attendees clustered on the riverbanks and gently scooped wriggling fish out of buckets. Many had time for a quick picture before depositing their fish into the river.

“I’m getting back in line,” said one adult attendee. “That was so much fun!”

For most folks, this was the first time they’d touched a sturgeon. “It felt spiny,” said one child, referring to the armored plates running down the sturgeon’s back. The fish have thick leathery skin, a helpful defense against predators, leading another child to remark that the fish “felt like a wet rock.”

Other participants had already grown attached to these ancient fish. One adult commented, “This is our second sturgeon release. We did one three or four years ago, so our babies are now probably two feet long or more. We’re glad to be part of the solution.”

Jenn Kirts, director of programs at the Chippewa Nature Center echoed that sentiment. “These are everybody’s sturgeon,” she told the crowd on the banks of the Tittabawassee. “What a gift to be able to bring these sturgeon back to this space. Your good stewardship, your protection of land adjacent to water, your protection of waters, your investment in conservation organizations makes this possible.”

Learn more about Saginaw Bay sturgeon restoration and take a virtual 360-degree tour of the Black River Hatchery, where the young fish were raised. For anyone who missed the chance to release a sturgeon on August 19, another set of public releases are scheduled for September 24 along the same tributary rivers.