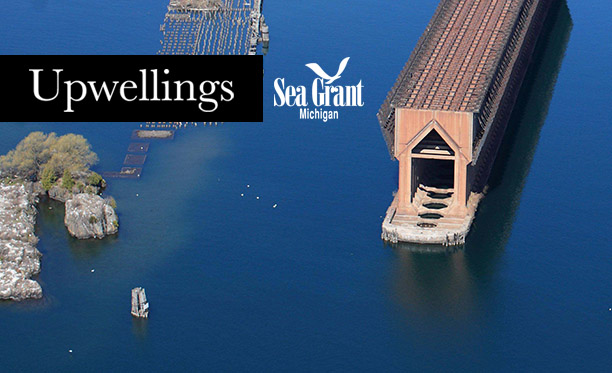 Coastal communities in the Great Lakes face a challenge when trying to balance natural resources with human needs. This balance is crucial to creating vibrant coastal communities. The term used to summarize such multi-use, water-dependent development is working waterfronts. 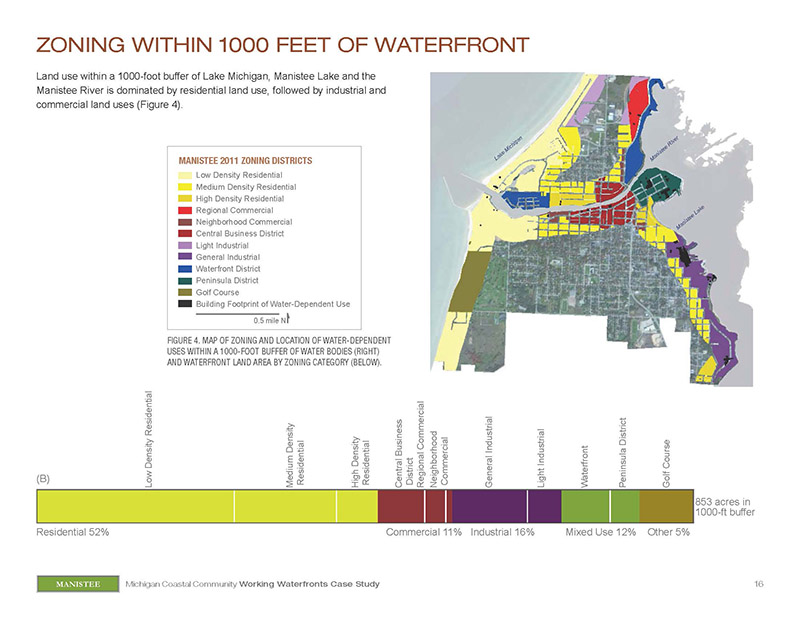 The Coastal Community Working Waterfront report, including 11 case studies, was compiled to describe national and state trends related to waterfront planning and use. The series defines working waterfronts terms, identifies what uses occupy coastal land and how communities are supporting and planning for their working waterfronts, and increases awareness of Great Lakes coastal planning issues. The report and case studies were put together by Elizabeth Durfee, the 2011-2013 National Oceanic and Atmospheric Administration (NOAA) Coastal Zone Management fellow. She worked jointly with the Michigan Coastal Zone Management Program and Michigan Sea Grant during the fellowship, focusing on sustainable coastal development and working waterfront planning. The suite of publications conveys both the importance of waterfronts to the local and state economy and quality of life in coastal communities as well as the need for strategic waterfront planning to protect the assets. See: Report and 11 case studies 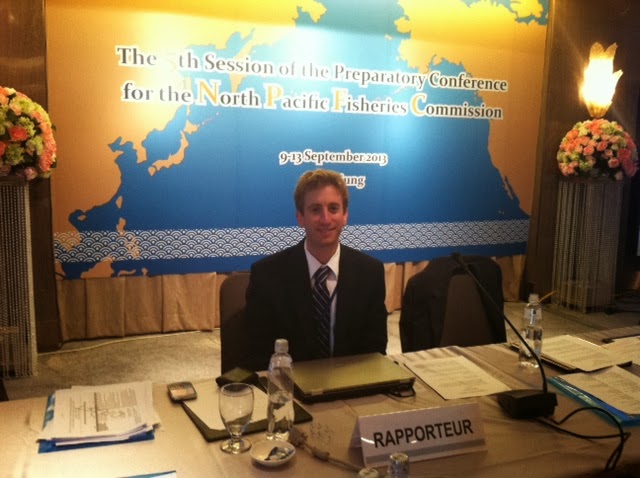 “I interviewed and met with people from the National Science Foundation, the Department of State, the U.S. Department of Transportation, the Army Corps of Engineers, and tons of folks from NOAA’s various offices. I’ve already made some great contacts, and I was only in D.C. for a week!” Clarence said, following his placement week. To read more about his placement experience, see: Fellowship Blog

“Things have been crazy since I began in June,” writes Elizabeth. “My time is divided between four main projects; the Great Lakes Phragmites Collaborative, a Great Lakes Restoration Database website, a nutrient credit trading program and a coastal science strategy project… I’m really looking forward to the rest of my time here and I’ll let you all know how it goes!”

Want to Join the Fellowship Team?

Applications are being accepted now! The fellowships run 1-2 years and are open to graduate students pursuing a wide range of degrees, but the most successful applicants have experience with both natural and social sciences and can demonstrate a connection to Great Lakes or marine issues. All applications are due in January or February. Upcoming fellowship opportunities include:

The lake whitefish is the most economically valuable commercial fish in the upper Great Lakes. However, climate change could change the rules, thereby affecting this and other fisheries found throughout the Lakes. A new section on the Michigan Sea Grant website profiles a research project focused on what could happen to the lake whitefish fishery under changing climate conditions. This research, performed by Michigan State University Ph.D. student Abigail Lynch and adviser Bill Taylor, professor of fisheries and wildlife at Michigan State University and associate director of Michigan Sea Grant, examines which climate factors influence recruitment of lake whitefish to the commercial fishery. The webpages also feature great new graphics such as the lake whitefish life cycle. 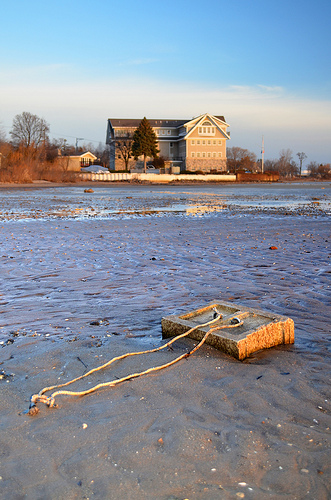 They’re up. Then they’re down. Then they’re up again. What’s going on with Great Lakes water levels? Since lake levels dipped to an all-time low earlier this year, a wet spring and snowmelt helped refill parts of the basin. Where are we now?

Compared to One Year Ago

While the levels have increased, they still remain low compared to long-term averages, especially in Lakes Michigan and Huron. The USACE reported that a comparison of monthly mean lake levels for October to long-term average (1918-2012) shows Lakes Michigan-Huron are 17 inches below average. However, Lakes Erie and Superior were near average, with Lake Ontario 1 inch above average. Check out the Michigan Sea Grant photo set that includes images of low lake levels. See: Flickr Set 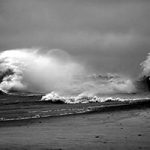 Storm of the Century

Have you heard about the White Hurricane? The great storm of 1913 — described as “a combination of two of the worst meteorological phenomena: a blizzard and a hurricane” — raged in the Great Lakes from Nov. 7-12, sinking ships, cutting off communications and killing hundreds of sailors. See: The Great Storm of 1913 Remembered 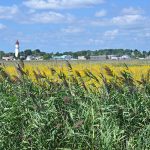 While it may appear that the plume-topped reed Phragmites australis is just another pretty face in Michigan’s wetland landscape, this member of the grass family can be bad news for marshes. The invasive plant is a perennial that quickly spreads through marshes and wetlands, robbing the fish, plants, and wildlife of nutrients and space; blocking access to the water for swimming, fishing, and recreation; spoiling shoreline views; and posing a fire hazard. See: The Nefarious Phragmites 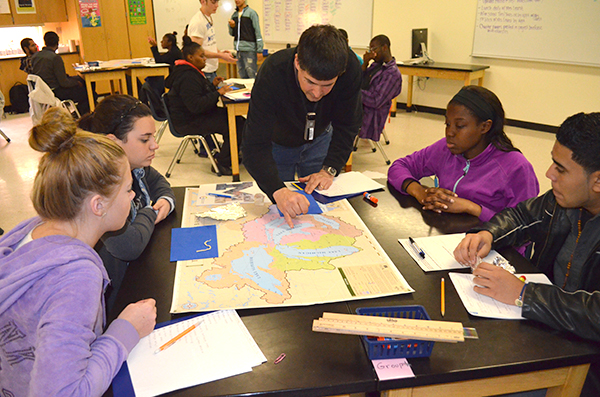 Students from Ypsilanti New Tech High School (YNT) are partnering with a research team to address climate change issues. The outreach team includes the University of Michigan Center for Engineering Diversity and Outreach (College of Engineering) and Michigan Sea Grant (School of Natural Resources and Environment). The YNT students were asked to analyze claims made about climate change and water quality in the Great Lakes from a variety of perspectives. Reflecting on claims made by biologists, chemists and climate scientists, as well as by economists, public policy makers, and historians, the students have been challenged to weigh the evidence (data) being made to support claims made by different disciplines and make decisions as to whether or not the information is credible, and thus, believable. See: GLEP and YNT Team Up 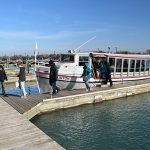 In 2013, nearly 4,000 students, more than 600 adult chaperones and 135 teachers from 31 school districts in Wayne, Macomb, Monroe and Washtenaw counties were involved in Great Lakes studies. We look forward to the 2014 season, when we will involve our 100,000th participant in Great Lakes learning through the GLEP! See: What is GLEP? 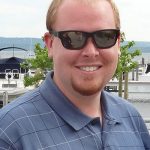 The Michigan Boating Industry Association (MBIA) honors great contributors to the marine industry with prestigious Lighthouse Awards in appreciation for their extraordinary efforts throughout the year. Josh Gunn, extension educator with Michigan Sea Grant, was recognized for his achievements and dedication to the Michigan Clean Marina Program. As reported by MBIA, his continuous efforts to promote and enhance the program have gone beyond the scope.

What should you get your Great Lakes lover this holiday season? Here are some suggestions.