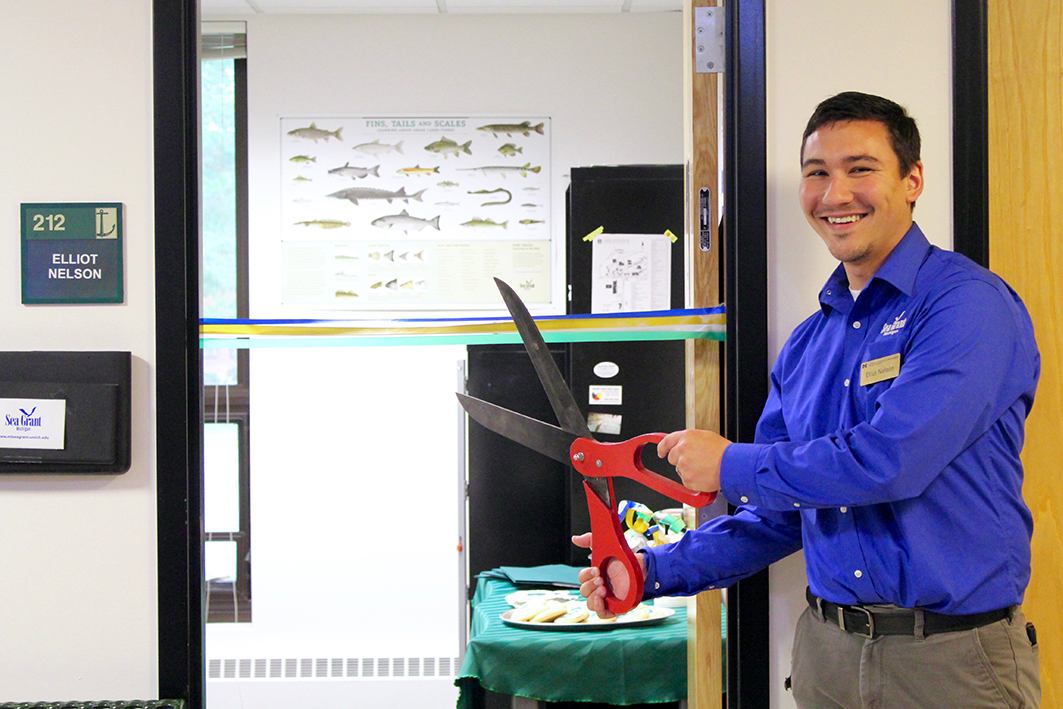 “Elliot has been working on a watershed plan for the Elk/Torch Lake system for a while,” says Diana. “He is knowledgeable in the area, a local — which is a good thing for us — and we are hoping through this to gain not only his ability to work here but for the other people from Lake Superior State to work with Sea Grant. I think we are going to get a lot out of the collaboration.” 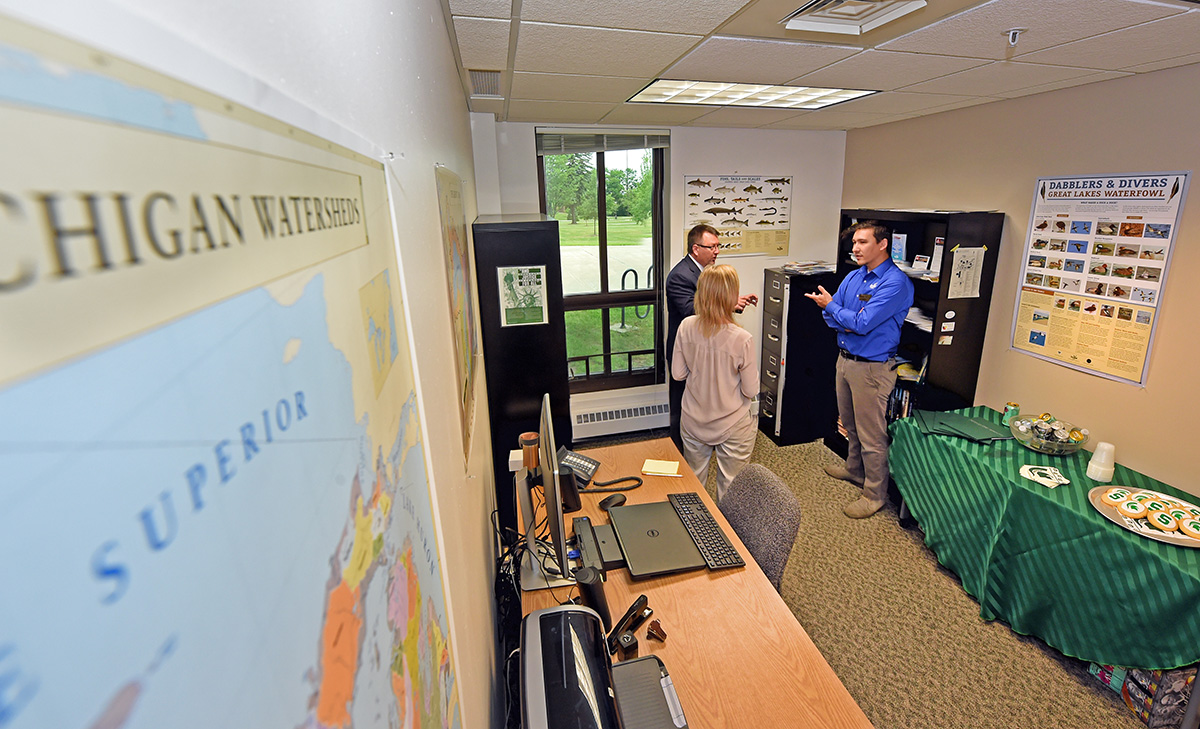 Nelson earned a Bachelor of Science degree from Michigan State University and a Master of Science at University of Michigan. He will provide education and outreach programming related to commercial, tribal, and aquaculture fisheries; coastal community development, including tourism and Great Lakes commerce; water quality; and coastal ecosystems.

“Lake Superior State is a one-of-a-kind institution with excellent programs that make a real-world difference across the U.P. and the entire Great Lakes,” says Nelson. “Having a Michigan Sea Grant office here just makes sense as there will be a lot of opportunities to collaborate to help continue to make an impact on the community and beyond.”

In 2016, the National Sea Grant College Program celebrates 50 years of putting science to work for America’s coastal communities. Our Michigan Sea Grant Extension educators live and work in coastal communities around Michigan. We celebrate their hard work and take this opportunity to introduce each of them during this anniversary year. See upcoming issues of Upwellings for more educator profiles. 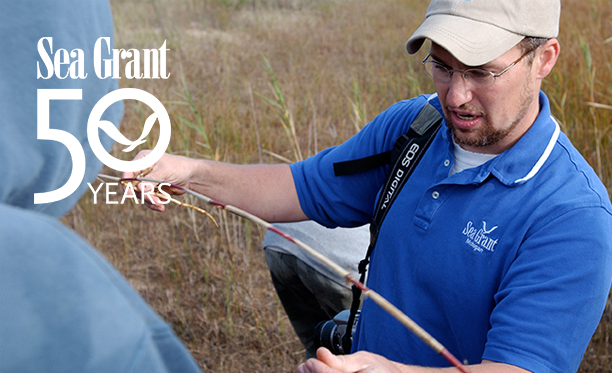 Schroeder frequently takes classes into the field to show the impact of invasive species and the importance of biodiversity. Photo: Michigan Sea Grant

“Northeast Michigan is rich in Great Lakes natural resources and in my Sea Grant Extension role it has been extremely exciting to work in partnership with communities to think about how science can help us sustainably benefit from our coastal resources,” Schroeder says. Read more about why he believes Michigan Sea Grant makes a difference in Michigan. 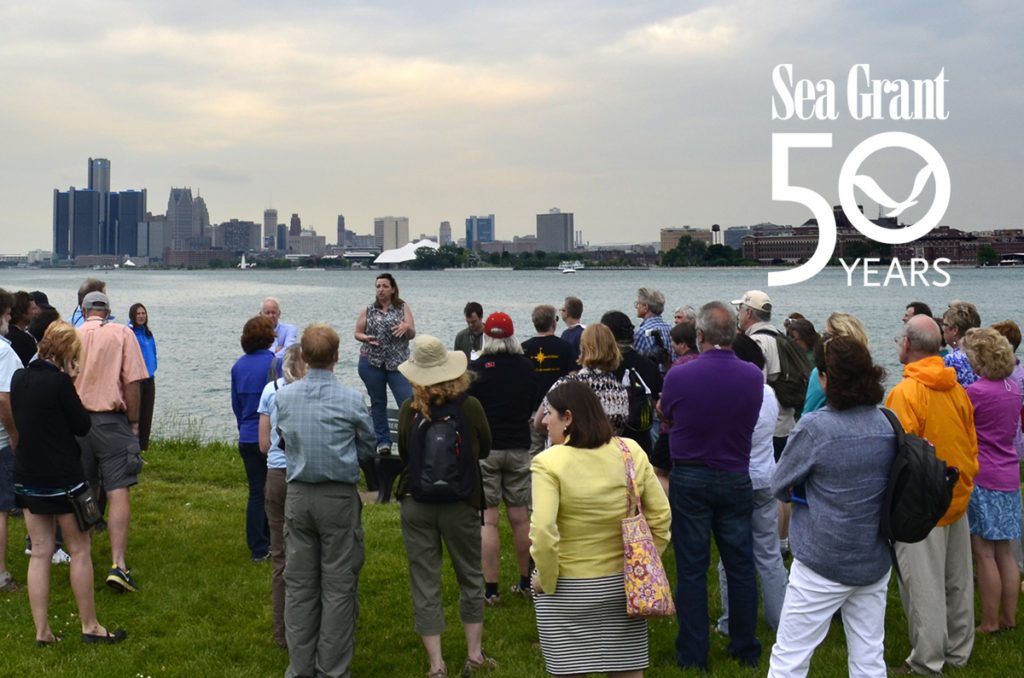 Volunteers are a critical part of helping nonprofits achieve their goals, Bohling believes. “There are so many grassroots environmental organizations that rely on volunteers to accomplish their missions. Find one that speaks to your environmental passion, roll up your sleeves, and make a difference.” Read Bohling’s advice for students who might be interested in a career with an environmental focus. 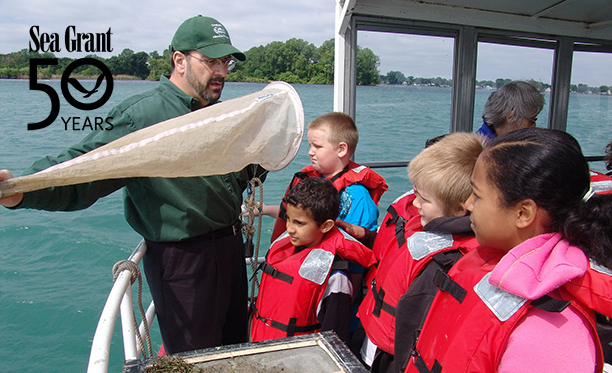 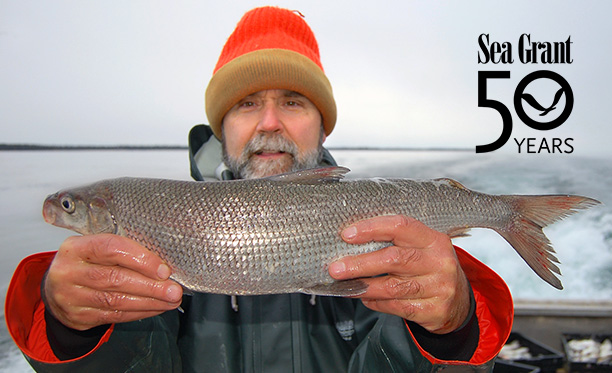 Ron Kinnunen is collaborating on a project to explore an Aquatic Invasive Species – Hazard Analysis Critical Control Point (AIS-HACCP) verification program for industries that are often threatened with new and costly regulations because of AIS. Read more about how his work helps ensure safety on our beaches and in our kitchens.

HABs on the horizon 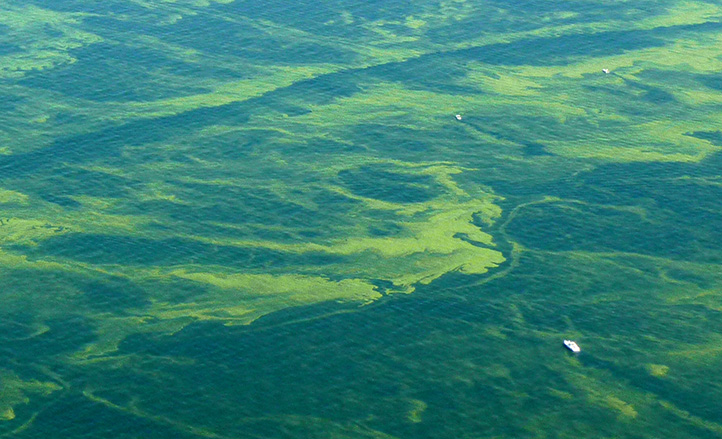 In 2010, the National Science Foundation awarded $5 million to an ambitious, multifaceted project aimed at illustrating probable effects of climate change on the Great Lakes.

Collaborative research teams from across the Great Lakes region have used the grant funds to investigate how increasingly extreme weather, driven by climate change, might affect human behavior, water quality, and habitats in the Great Lakes. The funds were originally awarded to nearly 30 principal investigators, many based at the University of Michigan. The project is headed by Anna Michalak at Stanford University. Michigan Sea Grant is assisting with outreach and education efforts.

The project, which wraps up this fall, has incorporated several goals:

Many of the project participants have used Lake Erie as a case study for understanding the complex interactions between natural and human systems. One of the greatest challenges facing Lake Erie comes from harmful algal blooms, or HABs. These spikes in naturally occurring algae populations can create a toxic, scummy mess along the lakeshore. Understanding how warmer waters and stronger storms will impact algal populations could help prevent future threats to drinking water, fisheries, and recreation around the Great Lakes.

Upcoming issues of Upwellings will take a deeper look at Lake Erie’s now-endemic HABs, how scientists are beginning to anticipate HABs before they form, and what bloom management might look like in an uncertain future. 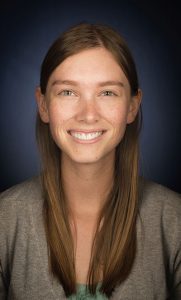 Geneva Langeland recently joined Michigan Sea Grant as communications editor. A 2016 graduate of the School of Natural Resources and Environment at the University of Michigan, Langeland will apply her Master of Science degree in environmental policy and communication as managing editor of this newsletter. She will also maintain Michigan Sea Grant’s social media presence and provide writing and editing support for Sea Grant projects and initiatives.

“We are excited to have Geneva join the Michigan Sea Grant team,” says Jim Diana, Michigan Sea Grant director. “Her experience communicating natural resource issues and her ability to translate technical materials to a broad audience will hugely benefit our outreach and communications efforts.”

A native of Grand Rapids, Langeland was influenced by the Great Lakes at a young age. “Growing up, I spent nearly every summer weekend at my grandparents’ cottage on Lake Michigan,” says Langeland. “The Great Lakes have been deeply formative places for me and my family, and it’s an honor to join a team that’s so passionate about protecting and enjoying them.”

Langeland also holds a Bachelor of Arts degree in biology with a minor in writing from Calvin College in Grand Rapids. Previously she worked with the University of Michigan Graham Sustainability Institute as a communications assistant and with Michigan Department of Environmental Quality as a water resources intern. 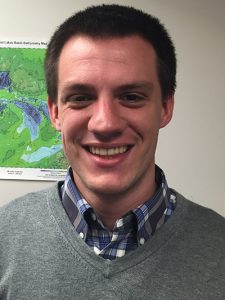 Cotrone, who hails from Northville, helped create the annual report to the National Sea Grant Office and provides support for a river snorkeling program led by the Huron River Watershed Council. In the fall, he will leave Michigan Sea Grant to pursue a master’s degree in water resource management at the University of Wisconsin—Madison.

Having grown up spending summers on the Great Lakes, Cotrone wanted to work with an organization involved in supporting the sustainable use of Great Lakes resources.

“Creating the annual report allowed me to see the incredible scope and positive impact of Sea Grant’s work to protect Great Lakes resources all over the state,” says Cotrone. “It’s really exciting to contribute to that work.” 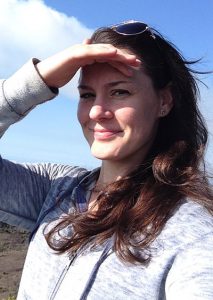 Bailey, a native of Traverse City, has been instrumental in finalizing two projects that provide beach safety equipment, signage, and outreach materials to communities around the Great Lakes. She also provides outreach support for a five-year National Science Foundation-funded project that studies the effects of climate change on Lake Erie.

“I am so excited to join the Sea Grant team back in my Great Lakes home state!” says Bailey. “Sea Grant works on such a wide range of Great Lakes topics. It’s a very dynamic place to work, with great opportunities for scientific and community engagement.”

Both Cotrone and Bailey have extensive experience in water resources. Cotrone, who holds a Bachelor of Science degree from the University of Michigan’s Program in the Environment, previously worked at the Watershed Center of Grand Traverse Bay. Bailey earned a Master of Science in environmental resources engineering from Humboldt State University and previously worked as a water resources scientist with Stone Environmental, Inc., in Montpelier, Vt.

Learning through immersion: Adventures on the Huron River 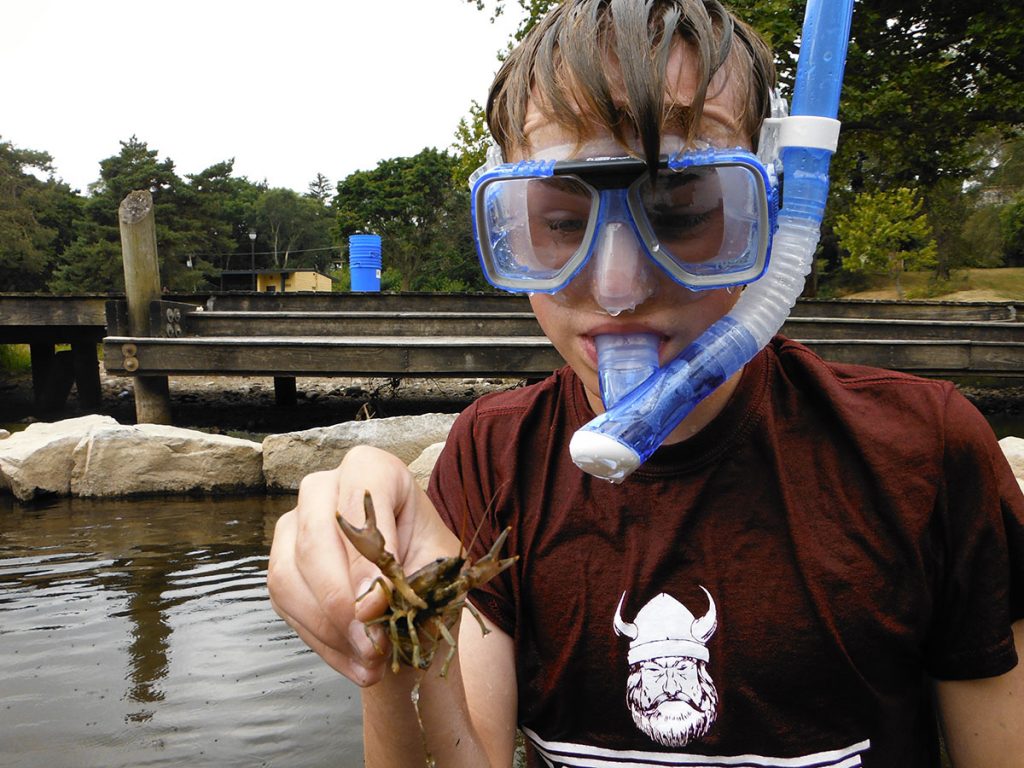 Sometimes, the best way to learn about rivers is by jumping into one.

Each week, HRWC invites these YMCA campers to gather along the Huron River to learn about watersheds, water quality, and aquatic habitats.

“I’m always impressed by how much knowledge these kids already have,” says MI Sea Grant Program Assistant Jack Cotrone, who helped develop and launch the river events. “We hope this program will allow them to see the hands-on application of things they’ve already learned in school — and to have fun while doing it!”

The on-shore lesson is followed by the chance to suit up and jump in. 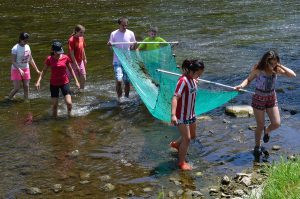 YMCA campers use seines to learn about life in the Huron River. Photo: Geneva Langeland

“Our goal is to provide teens the opportunity to exercise their intrinsic fascination as they navigate through natural areas within our community,” says Abbey Davis, Ann Arbor YMCA teen and volunteer director.

During the first outing on June 22, Michigan Sea Grant programming staff and HRWC Stewardship Coordinator Jason Frenzel met a group of campers and YMCA staff beneath blue skies at Riverside Park in Ypsilanti.

After a crash course in topics such as hydrology and pollution sources, the campers and leaders headed into the river. Some donned snorkels and began plying the waters in search of crayfish and clams. Others grabbed long-handled dip nets to collect aquatic insect larvae.

“While place-based education is a highly effective method of teaching, watching young people learn through hands-on activities is astonishing,” says Frenzel. “Kids that show up acting like they’re too cool quickly become highly engaged. Their first reaction is often astonishment: ‘Cool!’ or ‘Gross!’ But this quickly becomes intrigue and fascination: ‘Did you see this…?’”

The events also help Ypsilanti natives engage with the river. “Every week, people walking through the park will stop and ask us what we’re doing,” says Kate Bailey, MI Sea Grant program assistant. “They’re always impressed to see people swimming in the water and surprised at how many different living things we find here in the river.”

Michigan Sea Grant Extension educators write informative articles on a wide range of subjects — from the latest on invasive species to online tools available to help anglers increase their catch. Below are a few of the most recent articles.

Freshwater drum: A fun fish for kids of all ages 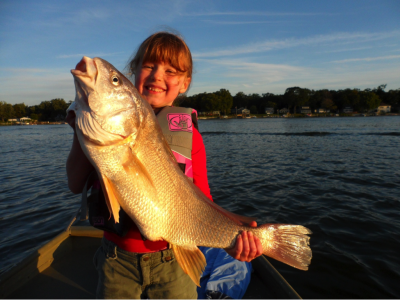 Freshwater drum, like this nearly eight-pound specimen, can be fun for young anglers. Photo: MSU Extension

They are not the most glamorous fish in the Great Lakes, but “sheephead” offer some pleasant surprises to open-minded anglers. Dan O’Keefe explains how these large, easy-to-catch fish can introduce children and beginners to the joy of an afternoon on the water. 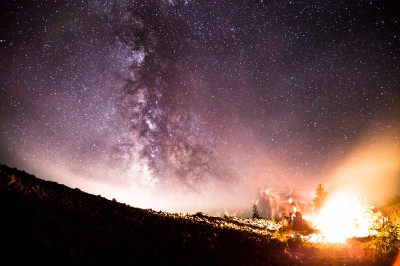 Learn about aquaculture from experts through new webinar series 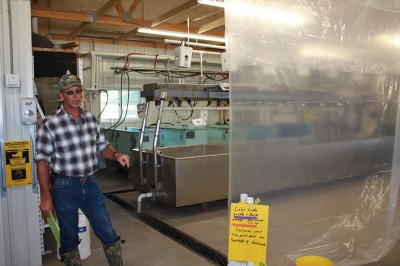 Representatives from the aquaculture industry are offering free webinars this summer. Ron Kinnunen will join them in August to present strategies for preventing the spread of invasive species during cultured fish transport.