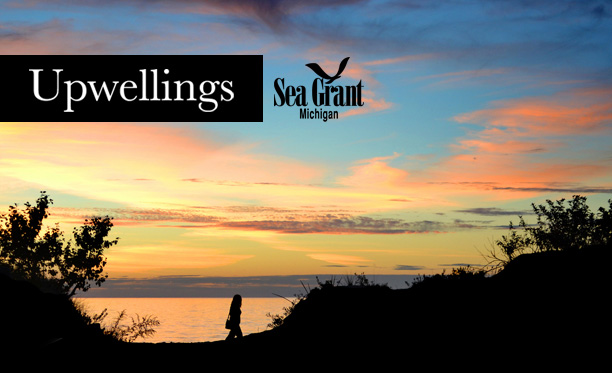 Rain gardens, weather buoys, and a lesser-known Lake Michigan fish will all feature in the latest round of research projects funded by Michigan Sea Grant.

Every two years, Michigan Sea Grant supports a wide variety of research projects led by teams based at Michigan universities. Five projects were chosen for the 2016-18 funding cycle.

“The response to the request for proposals was very strong,” says Jim Diana, Michigan Sea Grant director. “I am happy to see our partners from local, state, and federal management agencies represented in these projects and am impressed by the innovative ways the research teams seek to address some very challenging coastal resource management and policy issues.”

“These projects tackle, in creative ways, key issues affecting the Great Lakes and coastal communities,” says Catherine Riseng, Michigan Sea Grant research program manager. “I am especially excited about our new fellowship program and look forward to working with the fellows and the research teams to complete the proposed projects.”

In 2016, the National Sea Grant College Program celebrates 50 years of putting science to work for America’s coastal communities. Our Michigan Sea Grant Extension educators live and work in coastal communities around Michigan. We celebrate their hard work and take this opportunity to introduce each of them during this anniversary year. See upcoming issues of Upwellings for more educator profiles. 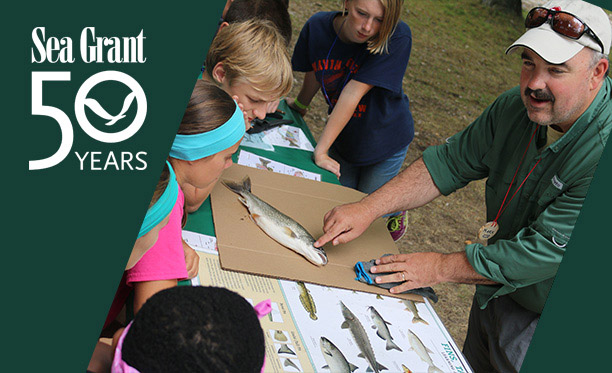 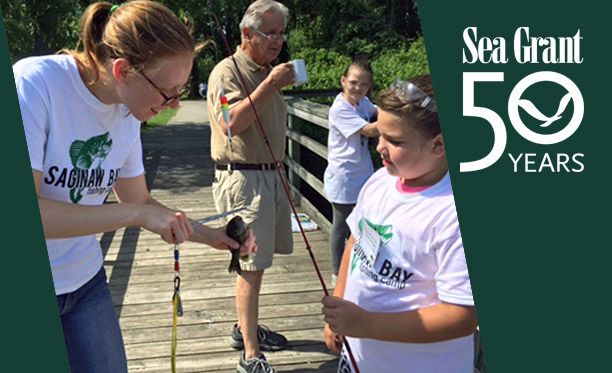 Katy works in the Saginaw Bay watershed, where “a land area larger than the state of Connecticut drains into one relatively shallow warm bay.” Read more about Katy’s work in the Thumb. 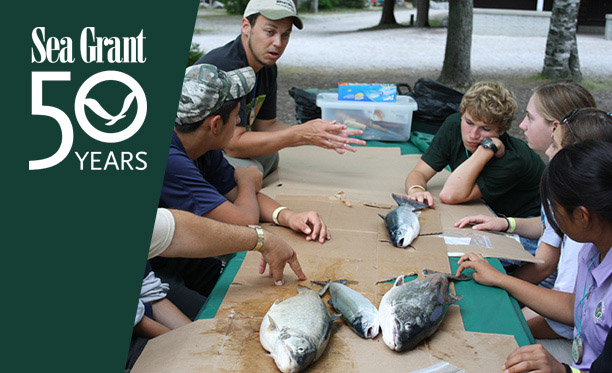 Dan knows that managing fisheries takes cooperation from partners who may not see eye-to-eye. Read more about Dan’s efforts to unite stakeholders around shared challenges.

HABs on the horizon 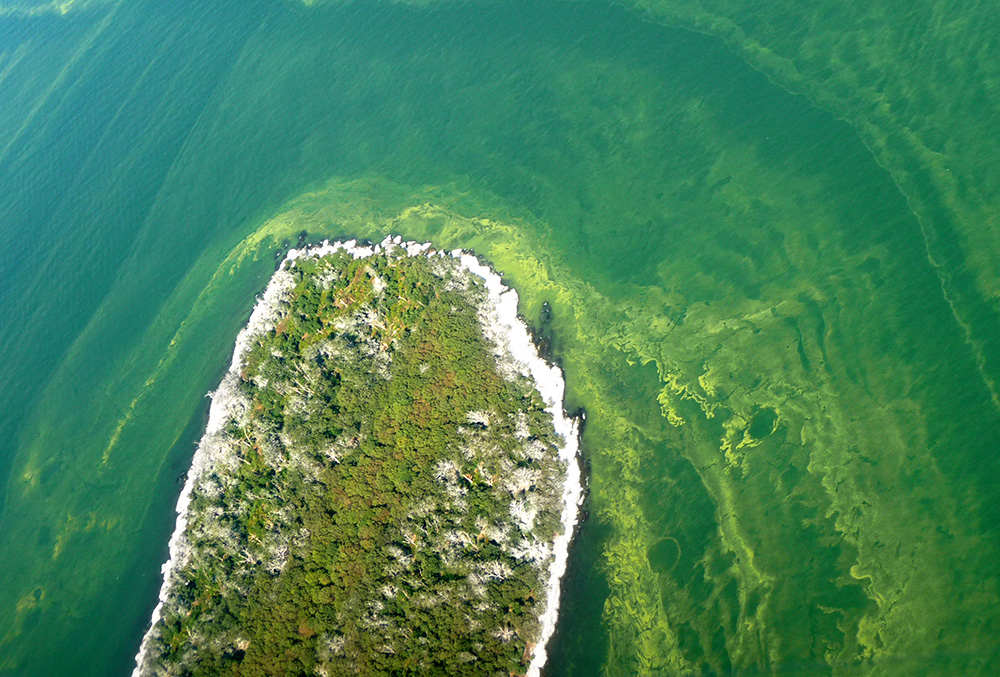 Lake Erie suffers from chronic harmful algal blooms, or HABs. Understanding how and why HABs form is essential to making sure Lake Erie’s drinking and recreational waters are safe in a changing climate. Read Part 1 of the “HABs on the horizon” series here.

Microscopic algae live naturally in the Great Lakes. Algal blooms happen when algal populations grow quickly, often forming large colonies that can be seen without a microscope. Not all blooms cause problems for humans. However, blooms that interfere with human activities or contain toxin-producing cyanobacteria (also known as “blue-green algae”) are called “harmful algal blooms,” or HABs.

Algal blooms happen when too many nutrients enter a lake, providing a feast for the lake’s algae. Nitrogen and phosphorus from farm fertilizer, wastewater treatment plants, and other land-based sources are the most common culprits. Algal blooms are more common after rain or snowmelt flow across the land and wash large quantities of nutrients into the water. Depending on wind and weather patterns, algal blooms can remain intact for weeks or months.

Why are HABs a problem? 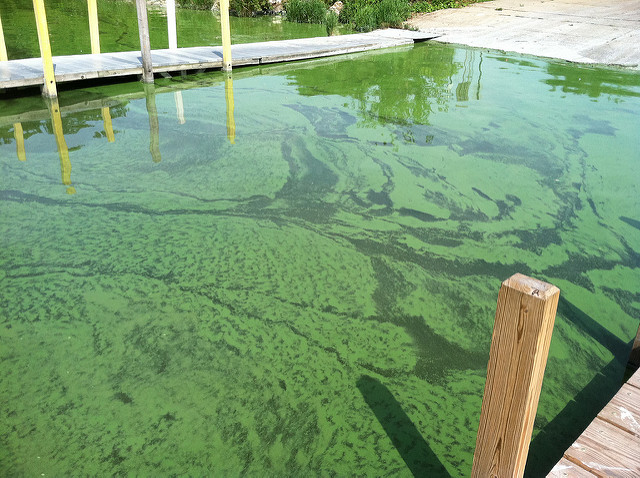 The main cyanobacterial species in the Great Lakes is Microcystis. These algae produce toxins called microcystins. Swallowing, inhaling, or touching Microcystis cells or toxins can cause a variety of uncomfortable physical reactions, including itchy skin, muscle cramps, twitching, nausea, vomiting, and liver damage.

HABs come with a steep price tag. If drinking water supplies get contaminated with toxins, residents and businesses must purchase safe water from other communities. Some at-risk communities have implemented extra drinking water monitoring or treatment strategies. Because swimming, boating, fishing, and walking in or near algal blooms can carry health risks, blooms often prompt beach advisories or closures. This deters tourist traffic and cuts into revenues for local recreational businesses. When decomposing algal blooms sap the water of vital oxygen, fish populations suffer or leave the area, leaving poor or nonexistent catches for commercial and recreational fishers.

The shallow, warm waters of Lake Erie’s western basin provide prime habitat for blooming algae. The Maumee River, the River Raisin, and other tributaries pick up nitrogen and phosphorus from agricultural and urban areas on their way to Lake Erie’s western basin. Without enough wind and currents to disperse the river water, the nutrients and algal cells stay concentrated in the shallow basin.

Additionally, human development has destroyed many of Lake Erie’s shoreline wetlands that once filtered out excess nutrients and contaminants. Thanks to these factors, combined with shifts in the lake’s food web triggered by invasive quagga and zebra mussels, Lake Erie has seen a steady rise in the frequency, size, and severity of HABs since the 1990s. 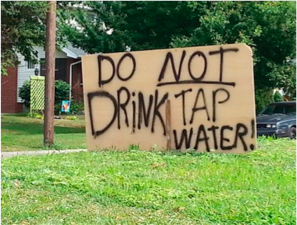 Lake Erie’s bloom season usually lasts from July to October and is heavily influenced by spring and early summer precipitation patterns. Conditions can vary dramatically from year to year. The 2015 bloom was the largest and densest on record but wasn’t particularly toxic. In contrast, the 2014 HAB was much smaller, but its toxins contaminated public water supplies for the city of Toledo, Ohio, drawing international scrutiny and resulting in a 2-day tap water ban.

So far, 2016 has been an unusually dry year for Michigan and Ohio. The spring HABs forecast, generated annually by the National Oceanic and Atmospheric Administration (NOAA), forecasted a relatively mild bloom season. As of September 2016, this has proven accurate: Maumee Bay is experiencing moderate cyanobacterial concentrations, and the bloom shifting across the rest of the western basin is relatively light.

See the next issue for a look at factors influencing the future of Lake Erie’s HABs, including climate change, agricultural practices, and new monitoring and modeling efforts.

And the winner is… 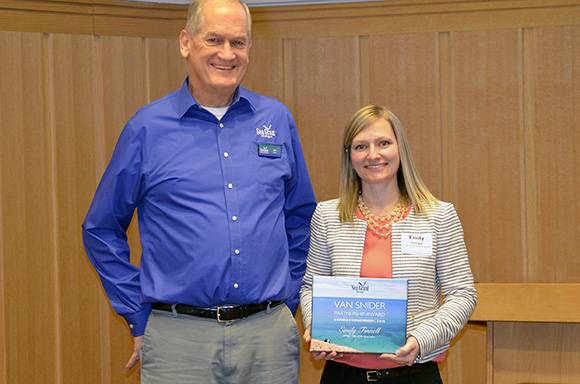 The Van Snider Award recognizes individuals who exemplify what it means to be a partner and friend of Michigan Sea Grant. Finnell was instrumental in developing the state’s 30-year Water Strategy, which continues to be unveiled this year. The strategy set important targets for the future of water management. She also facilitated Michigan Sea Grant’s partnerships with three state offices — the Department of Environmental Quality, the State Housing Development Authority, and the Department of Natural Resources — and has been very active in Michigan Sea Grant’s Small Harbor Sustainability project. Since the late 1990s, Finnell has participated in projects with Michigan Sea Grant, including many invasive species publications and supervision of a NOAA Coastal Management Fellow focusing on working waterfronts.

For her leadership, enthusiasm, and all of these activities dedicated to protecting and sustaining Great Lakes resources, Michigan Sea Grant is proud to recognize Emily Finnell with the Outstanding Partnership Award. 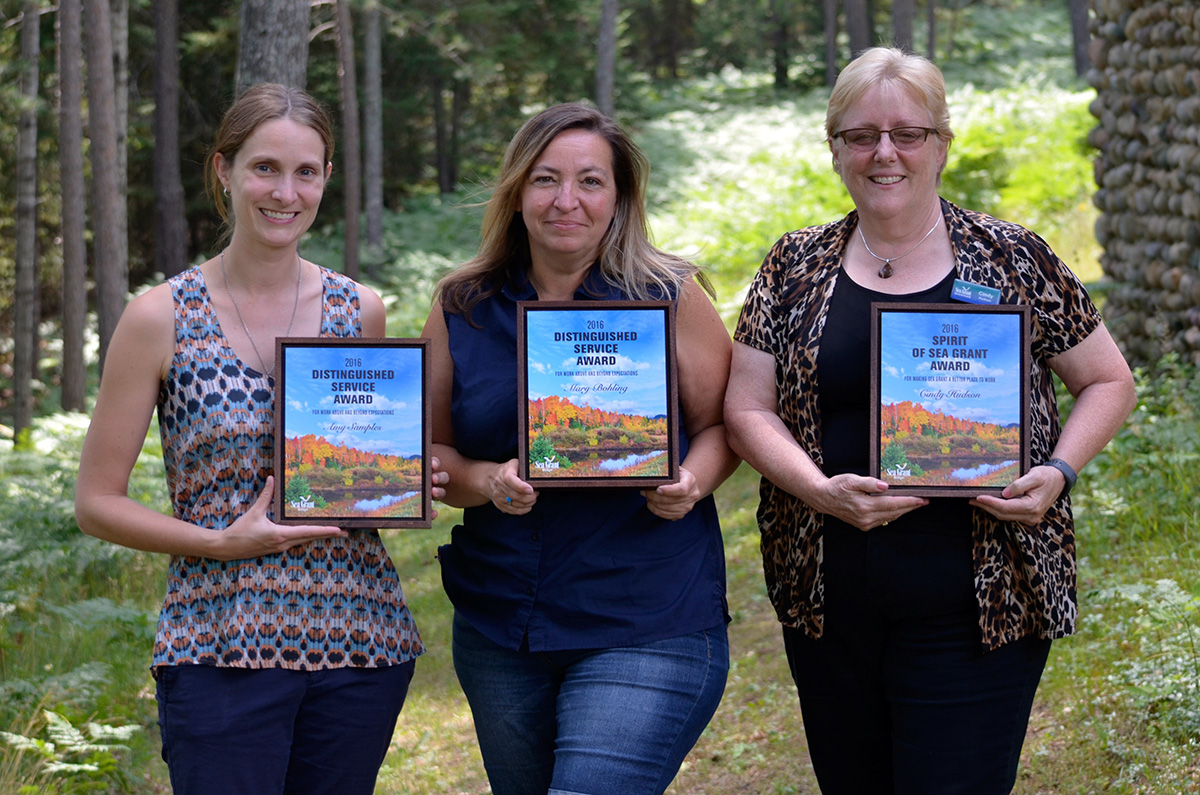 This summer’s Michigan Sea Grant retreat gave staff the opportunity to work, learn, and inspire each other with discussions about the important work that Michigan Sea Grant accomplishes and also to make plans for the future. During the retreat, three awards were presented to staff members:

Cindy Hudson, communications manager for Michigan Sea Grant Extension, received a “Spirit of Sea Grant” award. In her first year on staff, Hudson has encouraged collaboration and communication between the UM and MSU offices – and she places a priority on having fun at work! 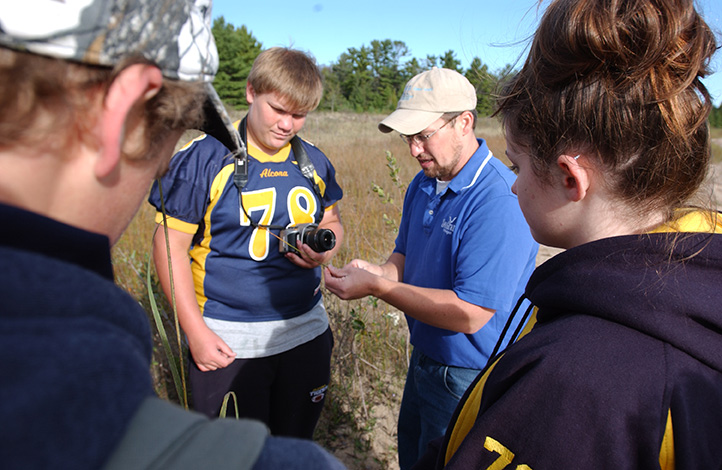 While the stewardship initiative is a strong community partnership now, many give credit to Schroeder for providing the initial spark to help it gain momentum. Michigan State University Extension educator Tracy D’Augustino, who also serves on the leadership team, says Schroeder’s work in developing relationships with individuals, agencies, and organizations enabled the formation of the network.

“His role as a Michigan Sea Grant Extension educator helped him to be uniquely situated to help organize and collaborate at the beginning of the project,” D’Augustino says.

During the 2015-2016 school year, the NEMIGLSI supported 94 educators in 32 schools across 8 northern Lake Huron counties, involving more than 4,100 youth in stewardship projects. Since 2009, more than 19,000 students have engaged as Great Lakes stewards, E-STEM learners, and valued community leaders through the NEMIGLSI. Read more about the award.

As the new school year begins, dive into science with the National Ocean Sciences Bowl! 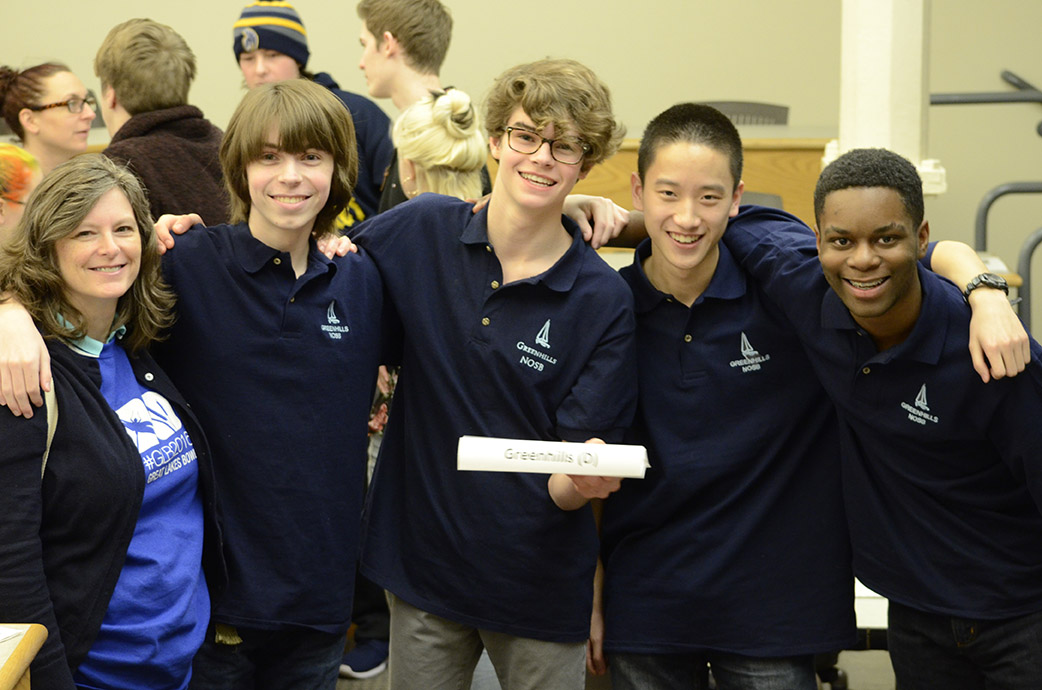 The National Ocean Sciences Bowl (NOSB) is a national academic competition coordinated by the non-profit Consortium for Ocean Leadership. NOSB unites teams of high school students in regional and national events to determine who has the deepest pool of aquatic knowledge.

Four-student teams meet in a tournament-style competition with buzzer rounds and timed team challenges. Questions are drawn from the fields of ocean and Great Lakes biology, chemistry, physics, geology, technology, history, and economics.

Regional winners walk away with more than just a sense of pride. They also receive a paid trip to compete in the nation-wide NOSB finals. National prizes have included computer or lab equipment for the winning team’s school, scholarships, visits to laboratories, cruises on research vessels, and more. The 2016 victors were awarded a paid trip to Monaco, generously supported by the Prince Albert II of Monaco Foundation.

Regional competitions are held throughout the nation in February and March. Michigan Sea Grant will help host the regional Great Lakes Bowl on Saturday, February 4, 2017, at the University of Michigan School of Natural Resources and Environment. The top team will be offered a spot in the national tournament to be held on April 20-23, 2017, at Oregon State University in Corvallis, Oregon.

Interested in starting a team? The Great Lakes Bowl regional competition is open to the first 16 teams to register. To register a team, contact nosb-great-lakes-bowl@umich.edu or (734) 763-1437 before December 9, 2016. Then start studying.

Michigan Sea Grant Extension educators write informative articles on a variety of subjects – from the latest on invasive species to online tools available to help anglers increase their catch. Below are a few of the most recent articles.

What is an alligator gar? 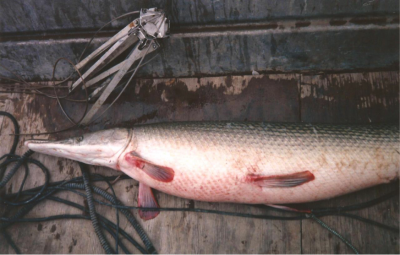 Momentum is gathering to restore this fascinating and valuable fish back to its native habitat. 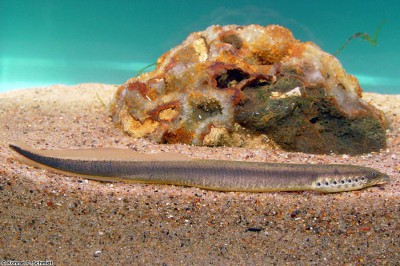 The invasive sea lamprey has had a devastating effect on the Great Lakes fishery. But few people realize that this invader has four native cousins. 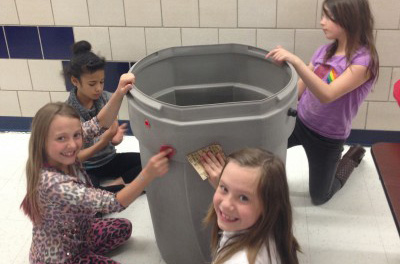 Using a fine grain sandpaper to rough up the surface of the barrel will help paint adhere more easily. Photo: Michigan Sea Grant

Rain barrels can be an easy—and colorful—green infrastructure option for homeowners. 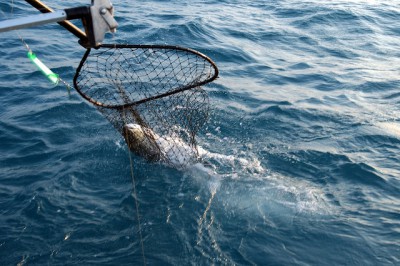 Before forming an opinion on the new stocking proposal, it is worth considering the latest science on the state of the Lake Michigan fishery. Photo: Michigan Sea Grant

Recent plans to reduce salmon stocking has stirred controversy among fishing communities. Dan O’Keefe explains some of the fishery facts underpinning this decision.