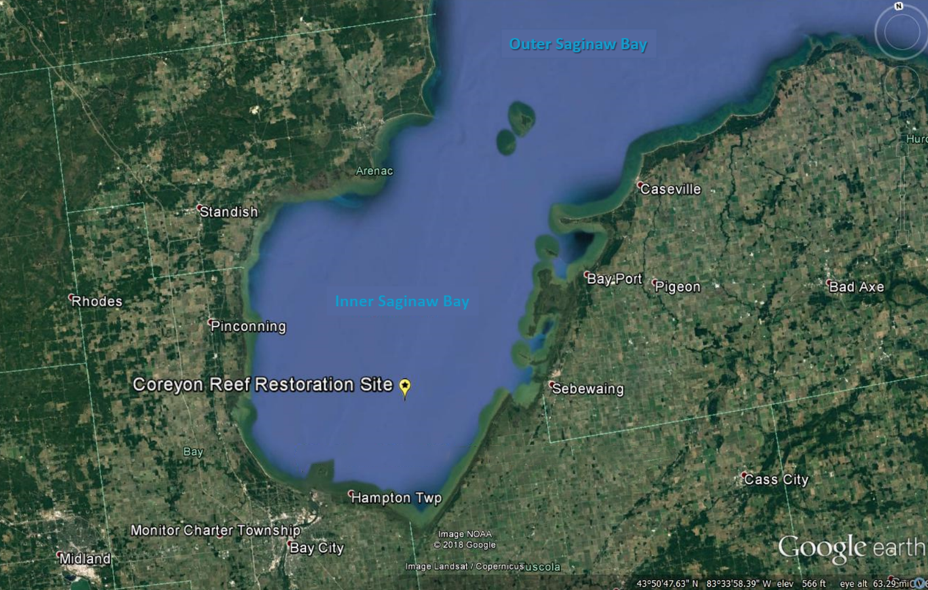 The rock reef restoration project is the culmination of years of work to restore historical fish spawning habitat within inner Saginaw Bay. The goal of this project is not simply to create additional spawning habitat for native fish species, but rather to help facilitate a resilient and diverse fish population. Evaluation of this demonstration project can also inform future reef restoration throughout the Great Lakes.

The first major step in this habitat restoration effort concluded in 2016 with the completion of a multi-year assessment of several potential reef restoration sites. Funded by the U.S. Fish and Wildlife Service, the project helped resource managers determine the feasibility of restoring rock reef habitat within Saginaw Bay.

The results of the assessment found that conditions in the inner bay are suitable for restoration, with the Coreyon Reef identified as a priority restoration site (Figure 1). Federal, state, and local partners are now preparing to construct and restore reef habitat at this site.

Historically, rock reefs formed in the Great Lakes as glacial deposits and provided important spawning habitat for many native fish species. This project will mimic these naturally-formed reefs by placing approximately 10,000 cubic yards of rock material at the restoration site. The rocks will range in size from 4 to 8 inches in diameter and will be placed on the lakebed by barge and crane (Figure 2). This will create a pile of rocks covering up to 3 acres and rising 2 to 4 feet from the lake bottom (Figure 3). The height of the rock pile may vary to prevent navigational hazards and maintain a minimum of 6.5 feet of water depth based on the recorded low water level.

When complete, this project will restore up to 3 acres of rock reef habitat at the Coreyon site. The restored reef will create important spawning and juvenile habitat for many native fish, including species that spawn in spring (Walleye, Smallmouth Bass, Suckers) or fall (Lake Whitefish, Cisco, Lake Trout, Burbot). During spawning, the gaps formed between the rocks will create a sheltered environment protected from predators where fish eggs can incubate. As the eggs hatch, the warm and highly productive waters of the inner Bay will provide excellent nursery habitat and abundant food sources for larval and young fish, encouraging fast growth and increasing survival potential.

Funding for this project was provided through a $980,000 U.S. Environmental Protection Agency, Great Lakes Restoration Initiative (GLRI) grant and a $25,000 Saginaw Bay Watershed Initiative Network grant. Restoration of the Coreyon Reef is anticipated to occur during the 2019 construction season and be completed by the fall of 2019.

Saginaw Bay’s warm, productive waters serve as nursery grounds for many fish species and ultimately support the fisheries of both Saginaw Bay and the main basin of Lake Huron. Historically, inner Saginaw Bay contained rock reefs that provided critical habitat for many native fish species. These reefs provided important spawning and juvenile habitat for many native species including, Walleye, Smallmouth Bass, and Suckers during the spring and Lake Whitefish, Cisco, Lake Trout, and Burbot in the fall.

As human development increased in Michigan, this critical reef habitat was largely lost due to sedimentation resulting from land use changes, such as logging and agriculture. The loss of inner Saginaw Bay’s rock reefs contributed to the 1940s collapse of Saginaw Bay’s Walleye fishery and negatively impacted local populations of Lake Whitefish, Lake Trout, Burbot, and other species.

It wasn’t until the passage of the Clean Water Act and the Great Lakes Water Quality Agreement in 1972 that environmental conditions in Saginaw Bay began to improve. In the past 20 years, the Saginaw Bay ecosystem has seen improved water quality and clarity and a return to a more natural assemblage of fish species. Sedimentation rates have declined because of regulations and improved land management practices. This includes requirements to control stormwater runoff and sediment from construction sites and voluntary effort to increase the use agriculture practices that reduce sedimentation from farm fields (e.g. cover crops, buffer strips, windbreaks, etc.). Despite these improvements, rock reefs in inner Saginaw Bay remain degraded and the fishery is still vulnerable to external stressors.

Today, Saginaw Bay once again has a world-class Walleye fishery and is a major focus of the Bay’s recreational fishery. Between 2008 and 2010, Saginaw Bay’s recreational fishery was valued at over $33 million per year. However, this important fishery is largely sustained by river-based reproduction in the Tittabawasse and Kawkawlin rivers. This has created a fishery dependent on a limited source of natural reproduction, leaving it vulnerable to external stressors and population instability.

To address this vulnerability, fisheries managers have long sought to restore rock reefs within inner Saginaw Bay as a means to diversify spawning habitat and the genetic makeup of Saginaw Bay’s fish population. Until recently, concerns over sedimentation rates in nearshore habitats have prevented fisheries managers from actively pursuing reef restoration in the inner Bay.

In 2008-2013, the National Oceanic and Atmospheric Administration led a multi-stressor project focused on Saginaw Bay. Computer models indicated that sedimentation rates had decreased in some nearshore habitats (Figure 4). Building on this finding, a collaborative team of federal, state, local, and academic partners received a 2014-2016 U.S. Fish and Wildlife Service, Great Lakes Fish and Wildlife Restoration Act grant to assess the physical and biological conditions of several historical reefs. This assessment also evaluated the potential for reef restoration within inner Saginaw Bay. The results indicated that: 1) environmental conditions and local sedimentation rates are suitable for reef restoration; 2) spawning Lake Whitefish and Walleye are present and depositing some eggs; and 3) egg predators are present and consuming eggs. The presence of spawning fish suggests that reproductive use would increase if the degraded reefs were restored. Additionally, current egg predation points to the need for reef restoration, as the gaps formed between the rocks would shelter incubating eggs from predators.

As a result of the assessment project, fisheries managers identified the Coreyon Reef as a priority site for rock reef restoration. With financial support from the Environmental Protection Agency and Saginaw Bay Watershed Initiative Network, the collaborative reef restoration team is moving forward with the design, permitting, construction, and restoration of the Coreyon Reef. Construction is anticipated to begin during the 2019 construction season and be completed by the fall of 2019. When complete, rock reefs may once again play an important role in helping to create a more diverse, stable, and resilient fishery in Saginaw Bay.

Bay Western Middle School students helped develop project signage for the reef restoration project. After researching the reef, they developed content about the Saginaw Bay Reef Restoration. This information was used in signage that will be installed at public boat launches in Spring 2020. 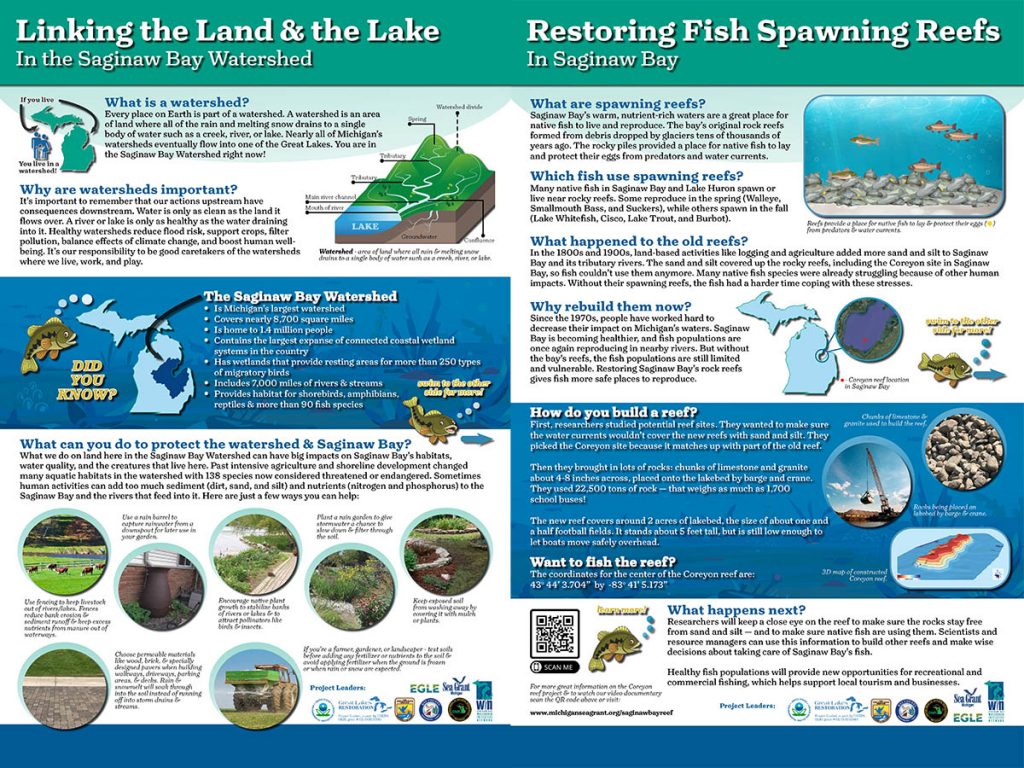 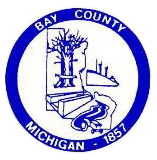 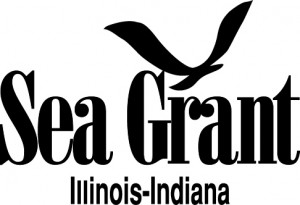 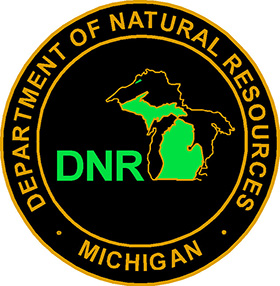 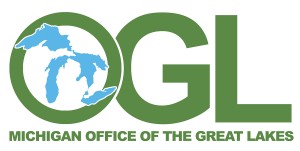 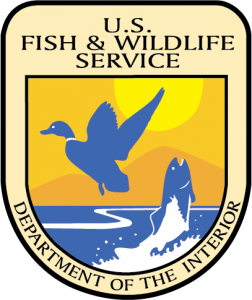 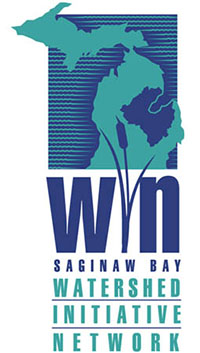