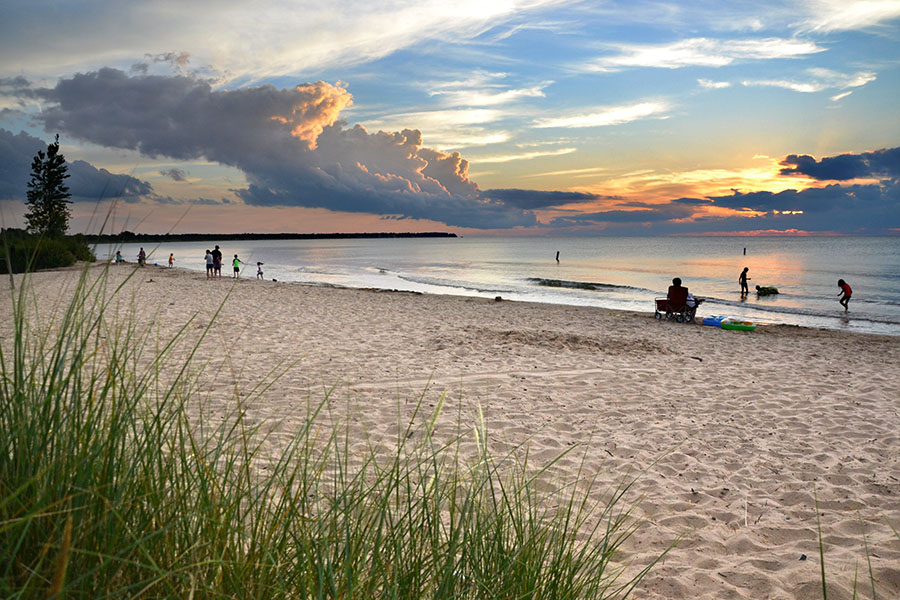 Great Lakes beaches can be broad sandy expanses full of tourists or remote stretches of land bordered by thick forest — or anything in between. A beach is defined as the zone extending from the water’s edge to the limit of the highest storm waves. Beaches often act as the first zone of a coastal dune complex. Beaches and other upland habitats can also be interspersed with coastal wetlands and emergent marshes.

Great Lakes beaches can be divided into different plant zones. Typical zones include:

Sand forms when minerals and rocks break down over time into smaller and smaller particles. These particles are nearly indestructible. In a lake, they’re cushioned by a film of water, so even a pounding surf has little effect. Sand from Great Lakes beaches and dunes is generally made up of 87-94 percent quartz.

The Great Lakes basin contains the largest freshwater dune complex in the world. About 275,000 acres of sand dune formations are located in Michigan alone.

If you’ve ever hiked along a Great Lakes dune, you may have heard a high-pitched sound with each step. The phenomenon is known as “singing sand” or “barking sand” and is thought to happen when there is a certain level of moisture between the sand grains. When the grains rub together or the wind blows in a particular way, the friction produces the sound.

How did these dunes form? As glaciers retreated over thousands of years, they transported and deposited sand and sediment, which accumulated over time, creating Great Lakes dunes along the way. Sand dunes can occur whenever there is enough sand, a consistent offshore wind of at least eight miles per hour, and a place for the sand to accumulate.

There are several kinds of sand dune formations in the Great Lakes basin. Some of these include perched dunes, linear dunes, and parabolic dunes. In Michigan, dramatic examples of each can be found along the shores of Lake Michigan and Lake Superior.

Coastal dune areas support a diversity of plants and wildlife. Primary dune plants like marram grass, beach pea, and sand cherry are particularly important to the health of Great Lakes dunes, as they help to anchor blowing sands.

Find out more about Michigan’s sand dunes in this MDEQ pamphlet (PDF). 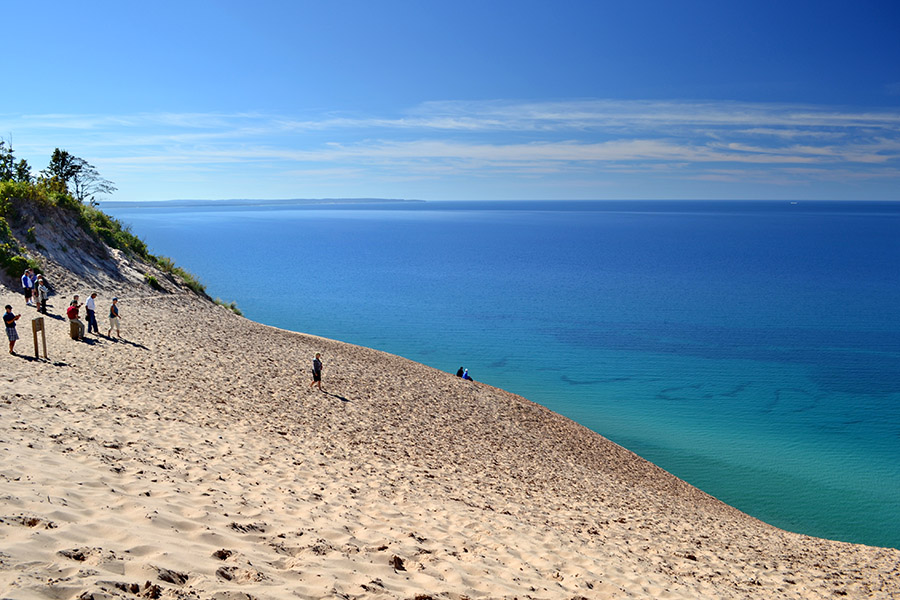 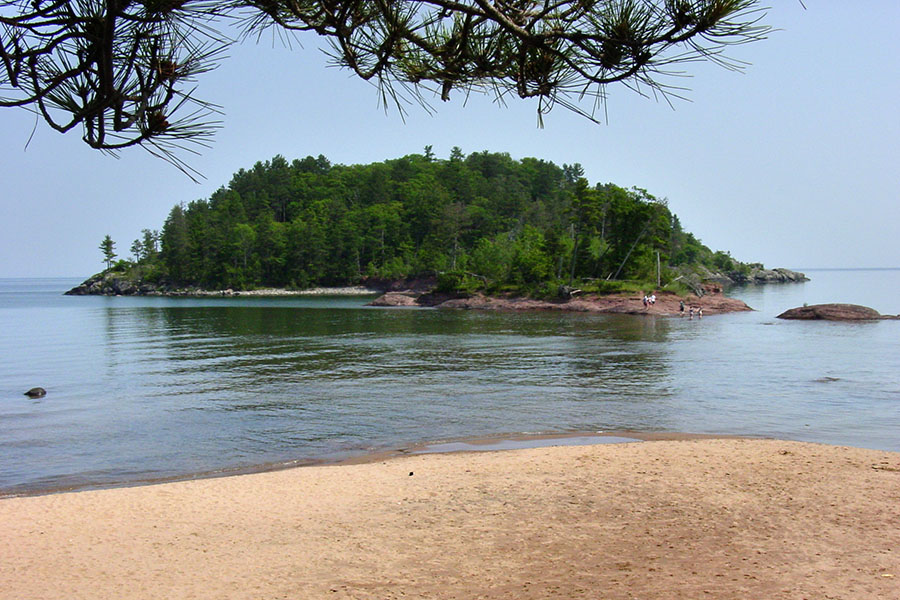 The Great Lakes are home to about 30,000 islands ranging in size from less than an acre to more than 140,000 acres (Isle Royale). The basin’s islands contain virtually all the unique natural features associated with the Great Lakes shoreline as well as some of the last intact ecological communities found in the Great Lakes.

Great Lakes islands support rare, threatened, and endangered species due in part to their biological diversity, isolation from human disturbance, and absence of invasive species. A number of colonial waterbirds nest on Great Lakes islands at sites free from predators and other disturbances.

Shoals surrounding the islands provide shelter and habitat for Great Lakes fish. Many islands are also considered important stopover sites for migratory songbirds that pass through the Great Lakes in vast numbers each year.

Many lakeplain prairies have been drained for development. Remaining lakeplain prairie remnants support an array of plant communities, with some remnants supporting as many as 200 plant species. Typical plant species include blue-joint grass, cordgrass, and various sedges and rushes. These sites also support a number of amphibian and reptile species as well as several species of grassland songbirds. 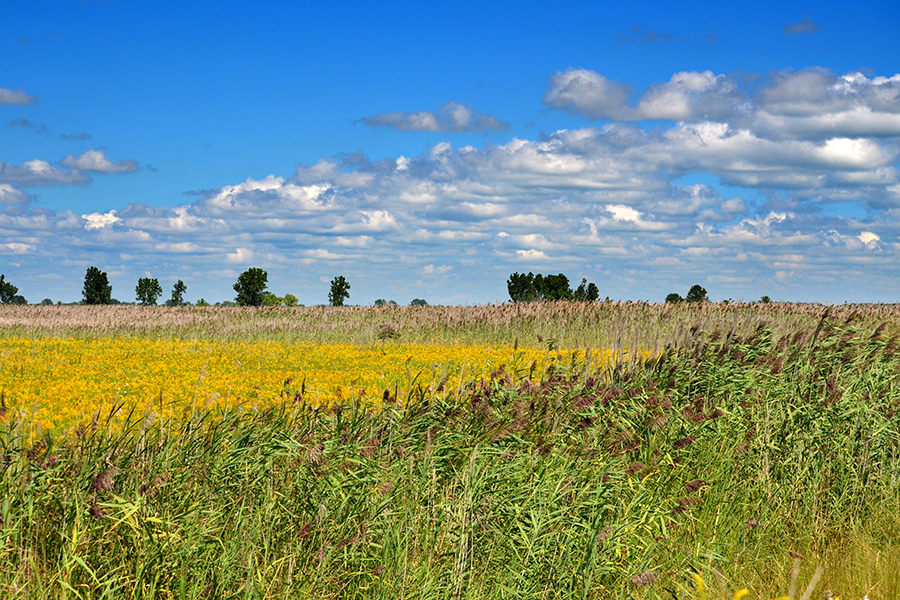 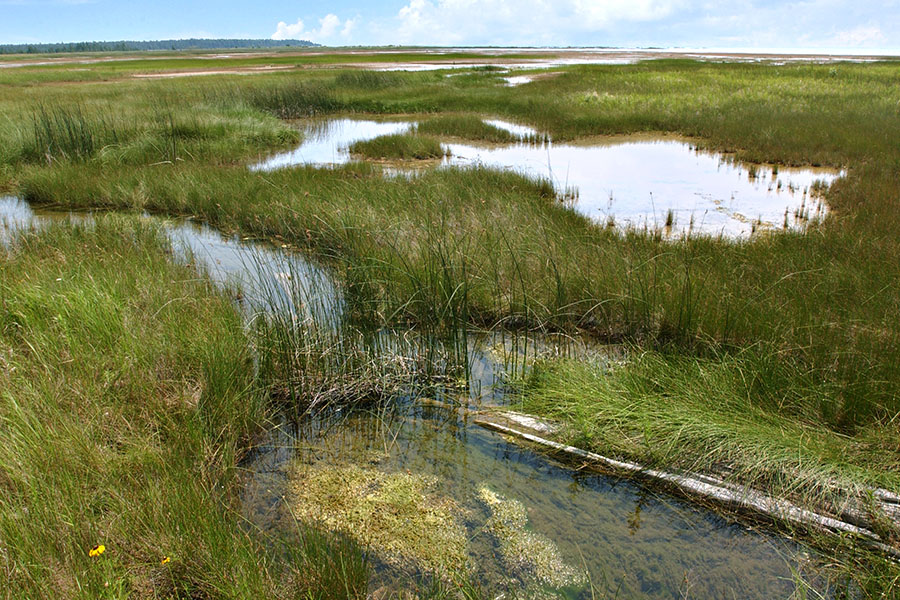 Learn more about wetlands and marshes with these Michigan Sea Grant resources:

The mouth of the St. Clair River is a good example of a river delta. River deltas form when sediments flow downstream and build up near a river’s mouth. This process produces slower currents that allow sediments to accumulate, forming islands and bars. The channeled water produces a branched system of waterways, vegetation, mud flats, and pools.

These habitats feature an alternating pattern of narrow sandy ridges and wet depressions (swales) parallel to a lakeshore. This topography formed when glaciers retreated and left behind mounds of sand and sediment in a series of dunes or ridges. A good example of a dune and swale habitat is located near Sturgeon Bay in northwest Michigan. The habitats provide excellent habitat for many migratory bird species.

These flooded areas are characterized by a permanent channel that meanders through a flood plain. This habitat is partly separated from the Great Lakes by sandy or rocky spits. Marshes often form in the calmer areas behind the spits and provide important spawning and nursery areas for fish and migrating waterfowl. The spits, if forested, often have high concentrations of migrating landbirds.

One habitat closely related to coastal wetlands is called an emergent marsh, which is linked to fluctuating Great Lakes water levels. When water levels fall, for instance, open mudflats are exposed and eventually sprout with vegetation, creating an emergent marsh. These areas are among the most productive of all habitats for waterfowl, and large marshes may support diverse breeding bird communities. Birds that nest exclusively in emergent marshes include the red-necked grebe, least bittern, redhead, ruddy duck, and marsh wren.

The open waters of the Great Lakes can be thought of as having nearshore and offshore habitat.

Overall, nearshore habitats are warmer and more productive and often support a large prey base of plankton species. In the Great Lakes, fish are the dominant open water predator.

Different ecological zones occur in Great Lakes open water. Scientists refer to the nearshore area as the littoral zone, which supports many aquatic plant species. The benthic, or bottom, zone supports a variety of aquatic organisms, some of which burrow in the sediment and provide food for other species. 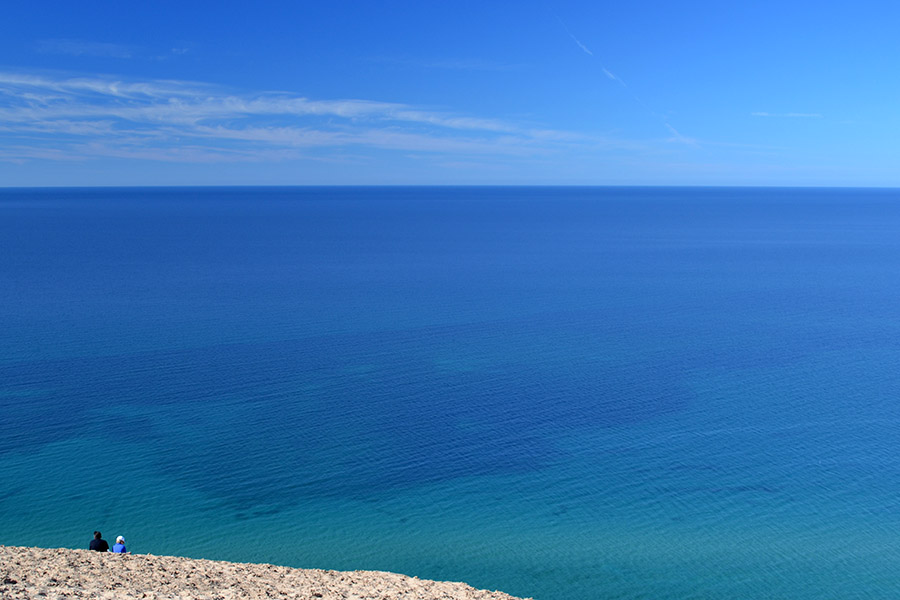