Lake Erie borders Michigan, Ohio, Pennsylvania, New York, and the Canadian province of Ontario. Its shallow, warm waters make it the most productive of the Great Lakes. 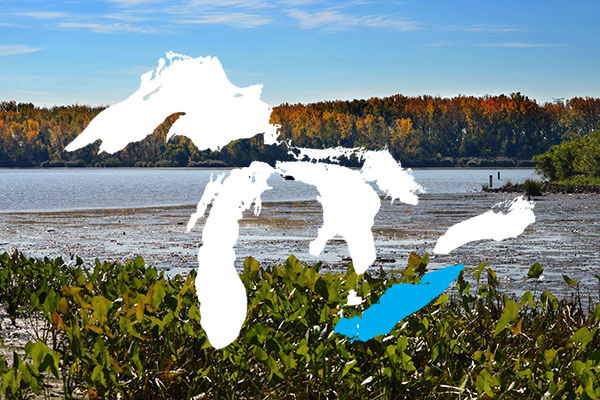 Lake Erie is the shallowest, warmest, and most productive of the Great Lakes. Three distinct basins provide a variety of offshore habitats. The Detroit River, Maumee River, and smaller tributaries drain into the western basin, which averages 24 feet deep and contains extremely nutrient-rich water. The central basin lies east of Point Pelee, Ontario (Canada), and the Lake Erie Islands. This basin averages 60 feet deep and is slightly less productive. The eastern basin, which lies to the east of Erie, Pennsylvania (U.S.), and Long Point, Ontario (Canada), is the deepest and least productive of the three basins. Here, water up to 210 feet deep provides colder conditions for fish that cannot tolerate warm summer temperatures elsewhere in the lake.

Coastal wetlands serve as nursery habitat for fish and waterfowl. Birdwatching is a major springtime attraction at Point Pelee and Long Point, where migrating birds rest after crossing the open lake.

Lake Erie has the largest commercial fishery of any Great Lake, with most of the fish being harvested from Canadian waters. Yellow perch and walleye make up most of the Canadian commercial harvest, while those species dominate U.S. recreational and charter catches.

Thanks to its habitat diversity, Lake Erie supports more fish species than any other Great Lake. The Lake Erie basin supports several native and invasive fish species not found in other Great Lakes watersheds. The Sandusky River also has the dubious distinction of being the first known breeding habitat in the region for an invasive carp species; grass carp eggs were first collected there in 2015.

Due to pollution, habitat degradation, invasive species, and overfishing, some once-prolific fish species have disappeared. Ciscoes, once the most common commercial catch in Lake Erie, are now absent from the lake. The lake sturgeon has been making a comeback in nearby Lake St. Clair, but despite the abundance of habitat for adult sturgeon in Lake Erie, they have not been able to reproduce in significant numbers for many decades.

For decades, Lake Erie has been a focal point for critical water quality concerns. Social movements leading to the Clean Water Act in 1972 rallied, in part, to address pollution issues that caused algal blooms and dead zones in Lake Erie and even the infamous Cuyahoga River fires. Today, the Cuyahoga River is one of nine federally designated Areas of Concern for Lake Erie, and a resurgence of harmful algal blooms in western Lake Erie remain at the center of water quality, ecosystem, and human health concerns for the region.