Lake Ontario is the easternmost Great Lake. It’s surrounded by New York and the Canadian province of Ontario. Water flows out out Lake Ontario through the St. Lawrence River on its way to the Atlantic Ocean. 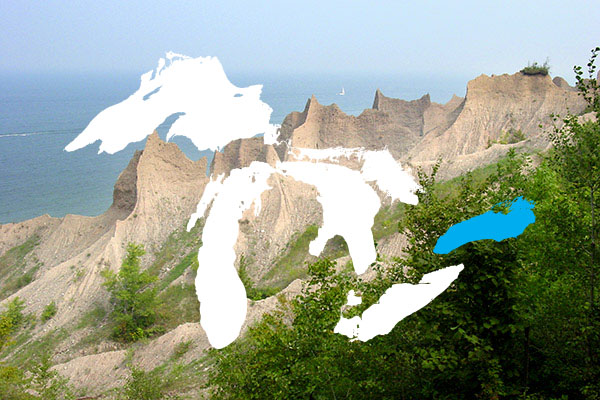 All of the Great Lakes ultimately drain into Lake Ontario. The Niagara River carries nutrient-rich water from Lake Erie to the western end of Lake Ontario. At its eastern end, Lake Ontario drains into the St. Lawrence River, which ferries Great Lakes freshwater to the Atlantic Ocean. Before construction of the Erie Canal, Welland Canal, and St. Lawrence Seaway, natural barriers such as river rapids and Niagara Falls prevented or restricted the movement of both fish and boats into the upper Great Lakes.

Being the farthest downstream, Lake Ontario was the first to be colonized by Atlantic Ocean invaders such as sea lamprey and alewife. These species devastated native fish in much the same way as they did in Lake Michigan and Lake Huron. Non-native baitfish still dominate Lake Ontario’s offshore forage base.

The offshore waters of Lake Ontario are less productive than nutrient-rich Lake Erie but considerably more productive than the upper lakes. Water clarity has been increasing since the invasion of zebra and quagga mussels, but baitfish, trout, and salmon have been slowly declining since the early 1980s, years before invasive mussels took hold.

Lake Ontario has the smallest commercial fishery of any Great Lake and accounts for only 1 percent of commercial landings in Great Lakes waters. Recreational and charter anglers commonly seek non-native chinook salmon, coho salmon, steelhead, and brown trout, along with native lake trout and Atlantic salmon.

Once home to several unique Great Lakes species, Lake Ontario now has more extirpated (locally extinct) species than any other Great Lake. Two relatives of the walleye (blue pike and sauger) were lost from Lake Ontario along with bigeye chub, lake trout, Atlantic salmon, and four species of deepwater cisco.

The Atlantic salmon is native to Lake Ontario but was not historically found in the other Great Lakes. Native salmon were wiped out by overfishing and destruction of stream habitat by the late 1800s. Stocking programs have attempted to reestablish Atlantic salmon in Lake Ontario and its tributaries. In 2014, researchers found evidence of natural reproduction of Atlantic salmon in the Salmon River for the first time in over a century. The cisco (also called lake herring) managed to survive overfishing, environmental changes, and invasive species that wiped out its close relatives. Cisco are now increasing in the Bay of Quinte, but remain at a low level relative to historic abundance. Bloater, one of the deepwater ciscoes, has been the subject of recent stocking efforts.

Lake Ontario is surrounded by a largely rural landscape, with forest covering nearly half of the basin. Development on the U.S. side leans heavily toward agriculture, while the Canadian shore sports more industrial areas and urban centers like Toronto, Ontario’s largest city. The lake’s link to the Atlantic Ocean drives activity at 13 major commercial shipping ports.

According to the registered indication, Viagra is not intended for use in women. The drug has no effect on a woman’s sexual arousal. The drug at a dose of 50 mg did not increase the hypotensive effect of ethanol in low blood concentrations in healthy volunteers. But the general recommendation – not to take alcohol in combination with drugs https://iprc.iu.edu/drug-info/featured-articles/266-substance-abuse-and-brain-awareness – is also suitable for Viagra. Therefore, it is better to refrain from taking alcoholic beverages while taking the drug. Then you can not be afraid of the superimposition of negative effects of the drug and alcohol on the body.