Lake Superior is the northernmost Great Lake. The lake borders Minnesota, Wisconsin, Michigan’s Upper Peninsula, and the Canadian province of Ontario. About 200 rivers feed into Lake Superior, and the average drop of water will travel around the lake for 191 years before exiting through the Soo Locks on the St. Marys River. 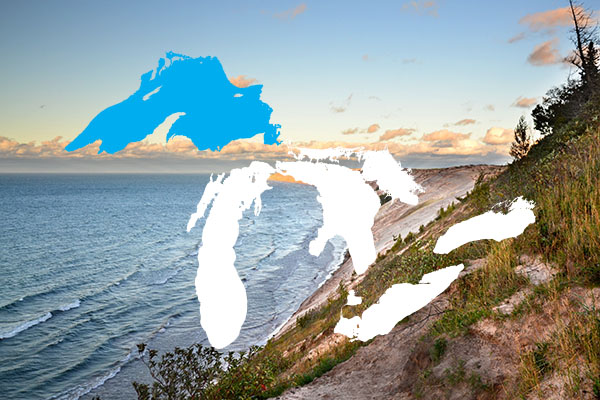 Known for its sparkling waves and rugged shorelines, Lake Superior contains more water than the other Great Lakes combined. Superior is the northernmost lake and the least affected by invasive species, habitat degradation, and other human-driven changes. The deepest and coldest Great Lake, Superior’s nutrient-poor waters have allowed native coldwater fishes to flourish.

The watershed is dominated by the Canadian Shield, noted for its ancient rocky outcroppings and thin, nutrient-poor soil. The Canadian Shield does not include the limestone bedrock common in watersheds to the south. Without the steady weathering of limestone, Lake Superior’s waters are too calcium-poor to sustain a large population of invasive quagga mussels, which build their shells with calcium carbonate dissolved in lake water.

Unlike other lakes, Lake Superior’s native species retain the upper hand over invasive and introduced species. Ciscoes and their relatives provide an important link between zooplankton and predatory fish. The only abundant invasive plankton-eating fish is the rainbow smelt.

Lean lake trout are the backbone of recreational fisheries in offshore waters of Lake Superior. Bold anglers can find huge lake trout near sunken islands and rock reefs. Stannard Rock north of Marquette, Michigan, is one such destination that has produced fish weighing over 60 pounds. While trolling is typically the preferred method of lake trout fishing in the Great Lakes, Lake Superior also offers good opportunities for jigging.