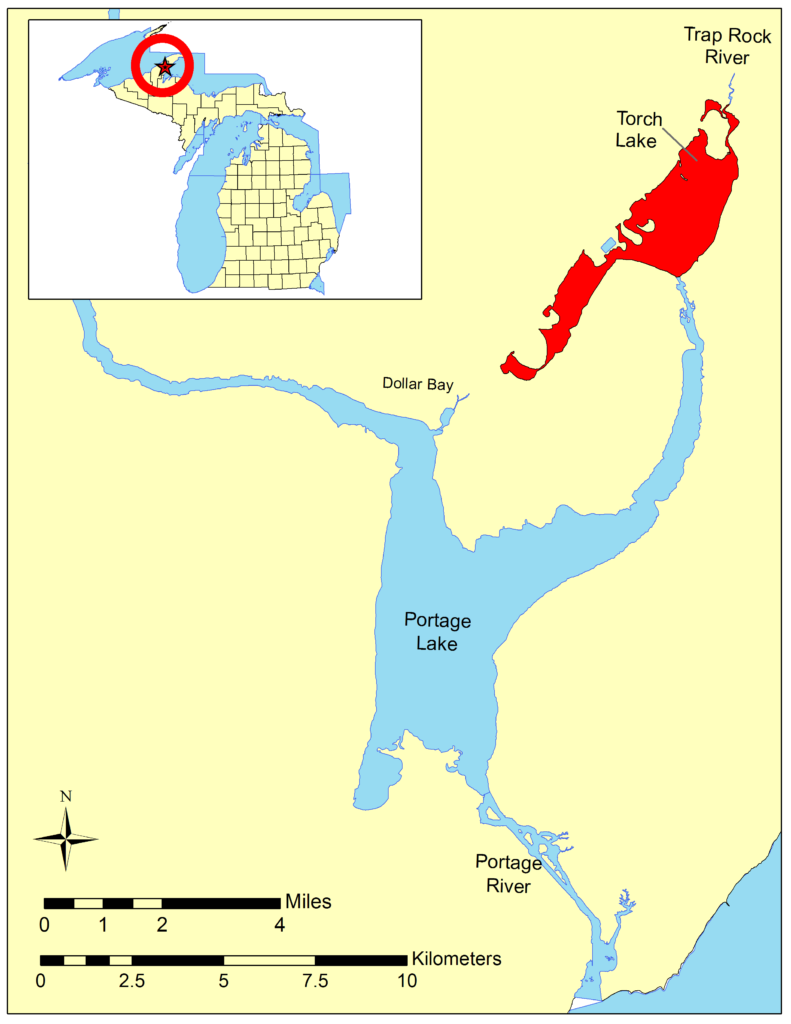 Intensive copper mining and reclamation took place in the Keweenaw Peninsula from 1845 through 1968. Extraction of copper metal from mined rock and reclamation materials during that time continues to affect the Torch Lake area decades later.

For example, the Torch Lake area experienced the following:

In the 1970s, fish caught in Torch Lake were found to have tumors. This finding led to fish consumption advisories and the recognition that the lake bottom had been damaged (degraded benthos). Ultimately, Torch Lake was deemed so polluted it was both designated as a Superfund site (on the National Priority List) in 1984. In 1985 it was included on the original list of Areas of Concern (AOCs), under the U.S.-Canada Great Lakes Water Quality Agreement (GLWQA, 1985).

What is an Integrated Assessment (IA)?

Rather than collecting new data or running additional experiments, an integrated assessment (IA) summarizes what is known and offers an assessment of how the science could be interpreted and used. The research team focuses on a complex environmental issue and then conducts a comprehensive analysis of natural and social scientific data and information.

The IA process is different from traditional research because researchers work closely with stakeholders to examine an issue from many perspectives, identify challenges, and evaluate feasible solutions. The aim is to create results that are current, trusted, accessible, and useful.

In 2012, Michigan Sea Grant funded a Michigan Technological University research team to conduct an integrated assessment of the Torch Lake AOC, a site which includes Torch Lake and its watershed.

This is a challenging site to investigate because of conflicting information on the success of remediation efforts and the remaining problems on site. For instance, from 2002-2006, the EPA conducted remediation by capping sediments and removed portions of the site from the Superfund site list. The Public Advisory Council petitioned the State of Michigan to delist the site as an AOC. However, the State of Michigan Department of Environmental Quality reported that sampling of the site showed contamination above acceptable levels and that two of the environmental issues (called beneficial use impairments or BUIs) that caused the AOC designation still exist as of October 2016.

Further, the caps of polluted soils are proving to be vulnerable to erosion at Torch Lake, which could potentially introduce dangerous substances into the lake, where they may prolong the impairment of the lake bottom. The EPA reported that there was not enough information available to accomplish rapid remediation of the site, where rapid means before natural attenuation will cover the lake bottom with sediments through sedimentation (a process expected to require hundreds of years).

The team of Michigan Tech researchers combined existing information on Torch Lake with historical information not previously compiled (from archives, personal histories, etc.) in order to:

A key component is maps of historical industrial activity combined with maps showing sites of industrial contaminant removal and measurements performed by the State of Michigan and the EPA. Researchers identified gaps in existing information that have prevented a more rigorous evaluation of the site.

The project was planned and executed in close conjunction with the Michigan Department of Environmental Quality in the hope of facilitating new actions or policies that can lead to site delisting.