The Huron-Erie Corridor Initiative received a 2013 Department of the Interior (DOI) Partners in Conservation award today, which is one of the highest recognitions bestowed on organizations by the U.S. Secretary of the Interior.

“The Department of the Interior is proud to recognize the accomplishments of those who are innovating and collaborating in ways that address today’s complex conservation and stewardship challenges,” Secretary Jewell said at the awards ceremony. “These partnerships represent the gold standard for how Interior is doing business across the nation to power our future, strengthen tribal nations, conserve and enhance America’s great outdoors and engage the next generation.” 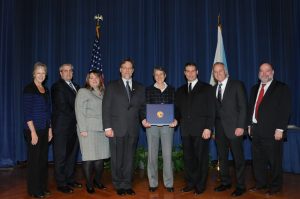 The Partners in Conservation Awards recognize outstanding examples of conservation legacies achieved when DOI engages groups and individuals representing a wide range of backgrounds, ages and interests to work collaboratively to renew lands and resources. The achievements of the Huron-Erie Corridor Initiative have been realized through the outstanding participation of diverse organizations on both sides of the Canada-U.S. border.

The St. Clair River, Lake St. Clair and the Detroit River, also known as the Huron-Erie corridor, are the international waters that connect Lake Huron to Lake Erie and provide habitat for over 65 species of fish. The region, which includes the Ottawa National Wildlife Refuge and the Detroit International Wildlife Refuge, is part of the central Great Lakes flyway for millions of migratory waterfowl. It contains some of the largest and most diverse wetlands remaining in the region.

Environmental changes in the corridor over time have resulted in the loss of habitat for fish and other organisms. In 2002, Michigan Sea Grant led a multi-partner project to construct fish spawning habitat in the Detroit River. This collaborative effort led to the creation of the Huron Erie Corridor Initiative.

Highlights of Michigan Sea Grant and the Huron-Erie Corridor Initiative:

The partners developed a plan to increase habitat for lake whitefish, lake sturgeon, walleye and other native fish populations, based on research suggesting that water flow, depth and temperature are important in the placement of spawning reefs. Pre- and post-construction monitoring demonstrated an immediate response by more than 14 native fish species, including spawning by the commercially important lake whitefish, which was a first in over a century; use by the globally rare northern madtom; and spawning by lake sturgeon, which is listed as a threatened species in both Michigan and Ontario.

Michigan Sea Grant has contributed to the Huron-Erie Corridor Initiative in a variety of other ways, including group facilitation, conference planning, website development, research coordination and grant management of several fish spawning reef habitat construction projects and education and outreach.