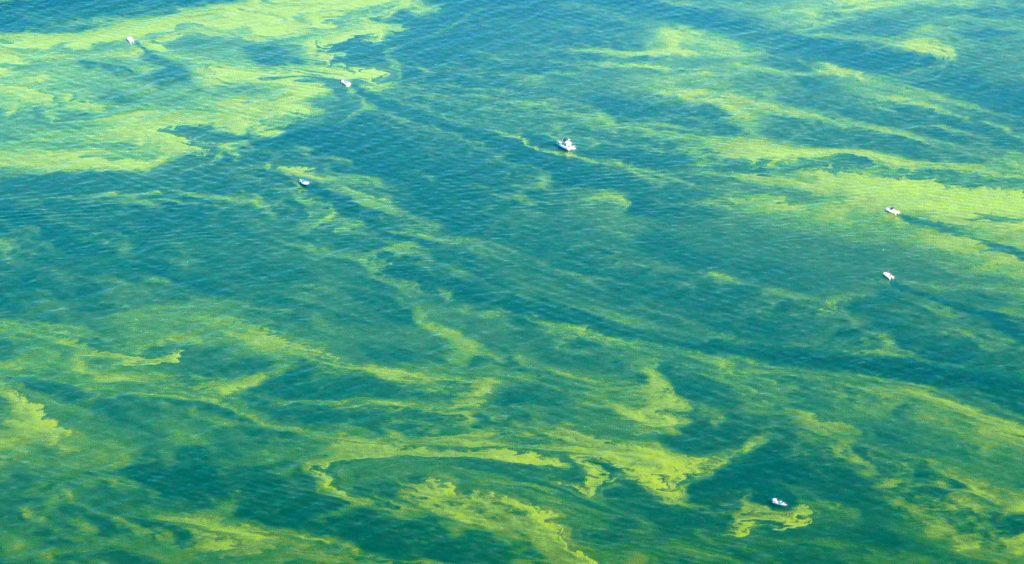 Early summer storms have experts concerned about effect on waterways

This past June was one of the wettest on record in the Midwest. Some of the heaviest storms in Michigan hit the southeast corner of the state and experts are concerned that high levels of phosphorus runoff into western Lake Erie may prompt record breaking algal blooms.

However, Lake Erie is not the only waterway that may see heavy rainfall impact water quality. Saginaw Bay shares many traits in common with Lake Erie that make it especially vulnerable to the environmental impacts of stormwater runoff. Both Saginaw Bay and Lake Erie are shallow bodies of water fed by very large drainage basins. In the case of Saginaw Bay, the drainage basin covers an area seven times bigger than the bay itself. A full 15 percent of the state of Michigan (8,709 square miles of land) is included within the Saginaw Bay watershed, meaning any rain that falls in this area eventually makes its way into Saginaw Bay.

The causes of algal blooms are complex but often a combination of warm temperatures, excess nutrients, and shallow slow moving water combine to create the perfect conditions for a major bloom. These three ingredients are most often present in shallow bodies of water that drain large areas of land, such as Saginaw Bay, Lake Erie, or Green Bay.

In some cases, algal blooms can produce toxins harmful to the health of humans and animals. These incidents are referred to as harmful algal blooms (HABs). It was a harmful algal bloom that contaminated Toledo’s water supply in August 2014. The most common harmful algal blooms in the Great Lakes consist of blue-green algae. Despite its name, blue-green algae is not actually algae but rather a form of bacteria known in the scientific community as cyanobacteria. Like algae, cyanobacteria contains chlorophyll and gains energy through photosynthesis. More information about cyanobacteria and the potential health threats posed by HABs is available through the NOAA Great Lakes Environmental Research Laboratory (PDF).

Nutrients, primarily phosphorus and nitrogen, contribute to cyanobacteria growth in the same way that they promote faster growing flowers in our gardens and crops in our fields. Scientists believe that runoff from several sources including faulty septic systems, concentrated animal feeding operations, lawn fertilizers, urban stormwater, and agricultural fields are contributing to more frequent harmful algal blooms. Heavy rainfall can increase runoff from all of these sources and lead to higher levels of nutrients available to feed the growth of HABs. It’s a problem that will likely be further exacerbated by climate change as temperatures rise and we see more frequent extreme storm events.

Efforts to mitigate harmful algal blooms in Lake Erie gained national attention following the Toledo incident, leading to great strides in policy addressing nutrient runoff. However, it is important to be aware that this is not a threat unique to Lake Erie. Many communities across the Great Lakes rely on water bodies vulnerable to HABs. The creative solutions being employed to address nutrient runoff into Lake Erie could benefit these watersheds as well.