Setting the record straight on alligator gar and invasive carp

Reintroduction of gar has nothing to do with invasive carp, Illinois DNR says 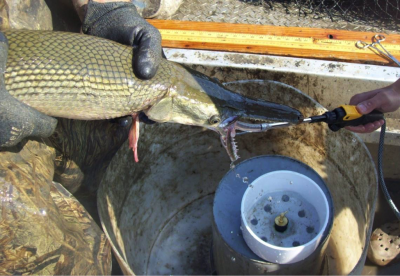 On May 31, 2016, the Illinois Senate voted unanimously to adopt a resolution urging the Illinois Department of Natural Resources to expedite the reintroduction of alligator gar and develop protections for all four native gar species. The Illinois House of Representatives had unanimously passed the same resolution three weeks earlier. This resolution specifically states that “alligator gar is our only native species capable of eating adult invasive carp.”

According to Illinois Department of Natural Resources (IDNR) Chief of Fisheries Dan Stephenson, this statement is misleading. Under his leadership, IDNR moved to reinstate the stocking program in January of 2016 after a two-year hiatus. Stephenson states, “Our stockings have never had anything to do with invasive carp. We see this as an opportunity to bring back a native species from extirpation, add an apex predator and introduce a potentially very large sportfish for our anglers.”

Earlier reintroduction efforts in Illinois provided an opportunity to study young gar in floodplain lakes where they were stocked. From 2010 to 2013 a total of 6,000 alligator gar were stocked in Illinois, but of these only 1,500 were large enough (12-18 inches) to avoid predators and survive. That is a proverbial ‘drop in the bucket’ relative to invasive carp that are measured in terms of tons per river mile.

According to Stephenson, “It’s a numbers game and the alligator gar will never be found in the numbers to suppress the [invasive carp] population. In addition, the gape on an alligator gar, even a very large one, will not allow the fish to take very large prey. So for the first three months of the invasive carp’s life it would be susceptible to alligator gar predation but after that they are too large.”

Research on young gar stocked in Illinois supports this. Nathan Grider studied alligator gar diet as part of his thesis work at University of Illinois Springfield, under the direction of Dr. Michael Lemke. At Merwin Preserve, the only prey item found in 17 alligator gar stomachs was gizzard shad. Gizzard shad were the most abundant species at the preserve and invasive carp were extremely rare. Largemouth bass, crappies and various species of sunfish were common, but none of these popular gamefish were found in the stomachs of Illinois alligator gar.

Young alligator gar at Merwin Preserve in Illinois ate shad ranging from 4 to 10 inches long. Although gar in the Illinois study were not full-grown, earlier research from the Gulf Coast suggests that alligator gar in the 4 ½ to 7 foot range also prefer to eat fish that are only 8 to 12 ½ inches long. Grider, who now works for Illinois DNR, states that alligator gar, “would not turn down the opportunity eat an invasive carp of appropriate size, up to 12.5 inches or so. But the reality is that there will simply not be enough of them to put noticeable pressure on the dense invasive carp population in our expansive open river system and invasive carp can quickly outgrow their preferred prey size.”

There you have it. Alligator gar are not being stocked to save us from the advance of invasive carp, but perhaps all of this media attention will ultimately help people appreciate alligator gar for what they are. In the past they were seen as a threat to gamefish, but gar are native predators that typically prey on abundant non-game fish like shad.

Alligator gar also are impressive gamefish in their own right. As Stephenson puts it, “regardless of the invasive carp impact, the reintroduction of alligator gar is a great story.”