By Dan O’Keefe and Cindy Hudson 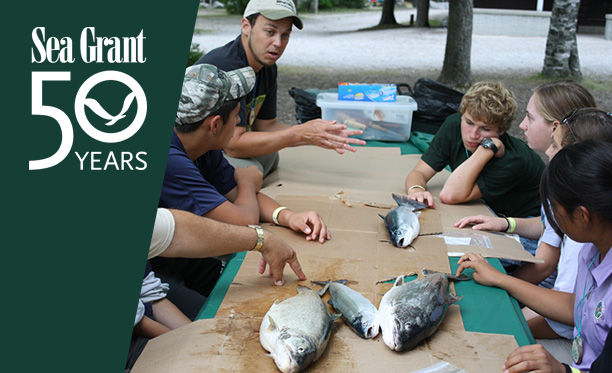 Our Michigan Sea Grant Extension educators live and work in coastal communities around Michigan. We celebrate their hard work and take this opportunity to introduce each of them during this anniversary year.

Dan O’Keefe is located in Ottawa County and serves eight counties along the coast of Lake Michigan. He has been an Extension educator for nine years. Dan graduated from Michigan State University with a bachelor’s of science degree in Fisheries and Wildlife. He received his master’s in biology at Central Michigan University and his doctorate in Wildlife and Fisheries from Mississippi State University.

What made you decide to be an Extension educator?

I have always enjoyed teaching, so the idea of being an educator was naturally appealing. My previous work in fisheries research also convinced me that education is a critical component of natural resource management. Natural resources are managed by government agencies that act on behalf of the public. If people are not well-informed they can influence management decisions in ways that are actually against their own interests in the long run.

How has Michigan Sea Grant made a difference to Great Lakes fishing?

We have been involved in aquatic invasive species education and prevention, documenting the economic impact of fishing-related industries, and development of new ways to market commercially caught Great Lakes fish. We have also partnered with other groups to restore spawning reefs, bring surface temperature maps to big lake anglers, and improve the design of fishing access sites. In recent years, Sea Grant has been instrumental in citizen science projects that enable anglers to collect data on Lake Huron fish diet and the prevalence of wild salmon in Lake Michigan.

I think the most important aspect of our work is less obvious, though. Over the past few decades, Michigan Sea Grant has worked to bring anglers, fisheries biologists, coastal community leaders, and lake managers together. The results are not always clear-cut, but the goal is to arrive at resource management decisions that are both socially acceptable and based on sound science. Meetings and surveys leading up to the 2012 decision to reduce Chinook salmon stocking were a good example of this. Support for the 50 percent stocking cut was nearly unanimous because of good public process, educational efforts, and the sound scientific basis for the cut.

What challenges does your area of the state face as you look to the future?

Last year, recreational harvest of Lake Michigan fish was the lowest it has been since coordinated recording began in 1985. Coastal communities are very concerned that tourism could fall off sharply if fishing continues to decline.

How will you and Michigan Sea Grant help?

I have been involved in studying the reasons for the decline of fishing-related tourism after the collapse of Lake Huron’s salmon fishery, and that experience has much to teach us now that Lake Michigan is facing a similar (but not identical) situation. I think that we may be able to avoid a collapse on Lake Michigan, but we need a good collaborative decision-making process to involve anglers and other stakeholders in making difficult choices related to the future of the fishery.

Sea Grant has always encouraged people to take a big-picture view of issues that have social, economic, and biological aspects. In the case of Lake Michigan, we must begin to manage multiple fish species in a more coordinated manner. This is much more difficult from a technical standpoint than single-species management, and it will also be more difficult in terms of stakeholder engagement.

Do you have any advice for students who might want to pursue a career with an environmental focus?

Don’t expect other people to do things that are not in their own self-interest. Many students prepare for careers in conservation, environmental protection, or natural resource management because of their desire to create a more sustainable world. To be successful, it is important to accept other people where they are at and address them in ways that respect their value systems.

Sea Grant is a federal-state partnership that turns research into action by supporting science-based, environmentally sustainable practices that ensure coastal communities remain engines of economic growth in a rapidly changing world. There are 33 programs across the country working to help build and grow innovative businesses along America’s oceans and Great Lakes, protect against environmental destruction and natural disasters, and train the next generation of leaders.

Established in 1969, Michigan Sea Grant, is a collaboration between Michigan State University and the University of Michigan. We offer research, education and community outreach on topics such as aquatic invasive species, coastal development, commercial and sports fishing, and environmental stewardship for youth.