In life, ivory gull draws crowd—and in death, will contribute to science

A rare arctic visitor brings birders to Flint, may be used by scientist to help better understand the species. 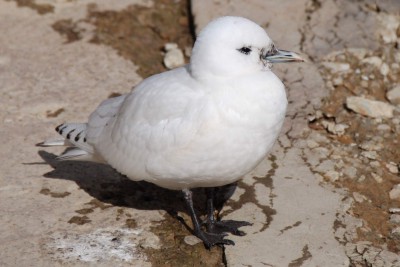 This ivory gull was present along the Flint River from March 9-13, 2017. The gull died on March 13. Photo: Andrew Simon Photo below of ivory gull flying taken by Darlene Friedman.

On the evening of March 9, 2017, Lauren LaFave, 16, was walking across a bridge over the Flint River on the campus of the University of Michigan-Flint. LaFave noticed an unusually white bird resting on the bridge and was able to snap a few quick pictures on her phone. After those photos were shared among a number of Facebook groups it was confirmed that the bird photographed was, in fact, one of the rarest birds in all of North America, an ivory gull.

To understand the rarity of finding an ivory gull in downtown Flint, one must understand a bit about the species. The ivory gull is a bird rarely found south of the Arctic Circle. In North America, ivory gulls breed in the high arctic regions of Canada on bare rocks exposed only during the summer months. Unlike most arctic birds that head south for the winter, the ivory gull spends its winters remaining in the arctic. It can be found foraging on pack ice in the Bering Sea as well as the ice edge region between 50°–65° north latitude around Labrador and Greenland. The bird research database Birds of North American Online notes that only 2000-3000 of these birds breed in North America. It is listed in the 2014 State of the Birds report as being a species that will most likely become threatened or endangered unless conservation actions are taken. The species decline is due in part to declining sea ice associated with climate change as well as high mercury levels that accumulate in their tissue.

The bird found in Flint is only the second ivory gull on record in Michigan, and one of only a relatively small number from the lower 48 states. Once the word got out of the bird’s presence, birders from several states and Canadian provinces flocked to see it, with some travelling in from Connecticut and Florida. The birding community was abuzz, and Flint certainly saw a small influx of tourism dollars as a result. Michigan Sea Grant and Michigan Audubon recently hosted a workshop which included highlights on the economic impacts of birding. Birding events like this and other bird-related travel and equipment expenditures are estimated to generate $40 billion a year in the United States. 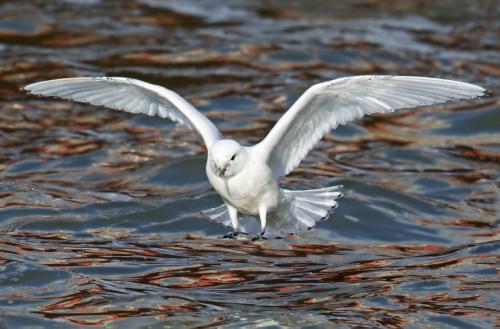 To the anguish of many, the ivory gull was only around for a few short days. Despite its apparent health on March 9-12, the bird fell ill and died on March 13. Wayward birds from the high arctic are often disoriented and malnourished. Many become prey to local predators or succumb to local diseases. While many birders were heartbroken over the loss, some were consoled with the fate of the bird’s body. A few individuals collected the bird and it was quickly preserved and sent to the University of Michigan Museum of Zoology in Ann Arbor. Collection staff from the museum will be performing a full necropsy and will send off tissue samples for analysis to help determine the cause of death. After the necropsy, the museum will add the bird to their collection of bird specimens.

Their collection of ivory gulls from around the globe has already been used in a variety of studies, including a recent study documenting the dramatic increase in mercury levels in ivory gulls. In general, there is still much to learn about the ivory gull as it is one of the least studied gull species in the world. It’s high arctic range makes comprehensive studies of the bird hard to perform. This is, in part, why museum specimens, such as the Flint ivory gull, are extremely important. Thanks to the action of those on the scene of the bird’s death, the Flint ivory gull’s legacy will continue on with the scientific studies it will generate for years to come.