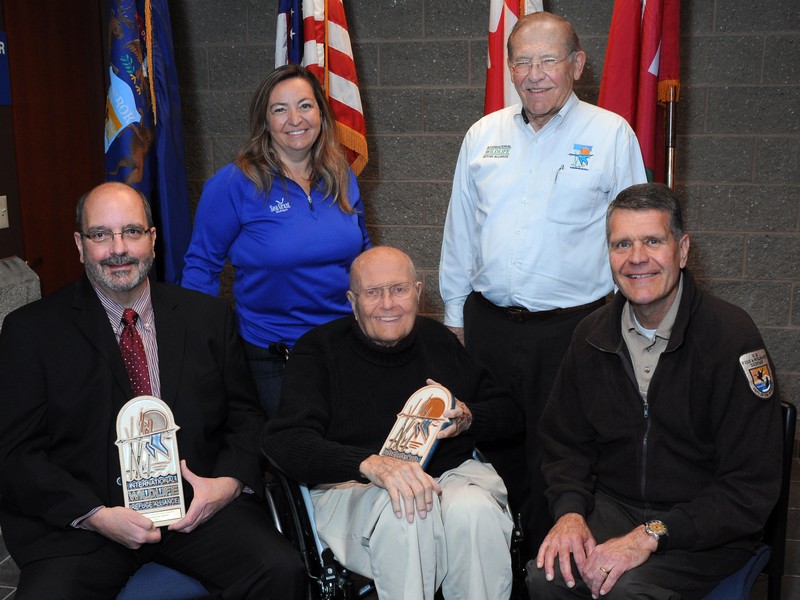 The IWRA is a nonprofit organization dedicated to supporting the mission and purposes of the Detroit Refuge, the only international refuge in North America. It provides many vital services to the Refuge, such as community outreach, education programs, habitat restoration, special events support, volunteer staff, advocacy, and fundraising.

“The Refuge is such a wonderful asset to the Detroit area,” said Mary Bohling, a Michigan Sea Grant Extension educator. Bohling also is a current board member and one of the original organizers of the International Wildlife Refuge Alliance. “The Alliance has been an important part of building fantastic partnerships to help protect, conserve, and manage the Refuge’s wildlife and habitats. As a Sea Grant educator, I’m very proud to have been a part of making this happen.”

Since 1991, more than 100,000 students and adults have participated in Michigan Sea Grant’s Great Lakes Education Program. In addition to classroom lessons, students, teachers, and adult chaperones board the schoolship Clinton to learn more about conservation and stewardship of our state’s Great Lakes and waterways. Soon students will be boarding the schoolship at the newly constructed fishing pier and boat dock in the Detroit Refuge Gateway. The accessible dock and fishing pier are expected to open in the fall of 2017.

“We’re honored to receive this John D. Dingell Jr. Award,” said Extension Educator Steve Stewart on behalf of Michigan Sea Grant. “We’re also looking forward to welcoming many more students on board the Clinton from the new dock at the Refuge Gateway. It is critical that students have the opportunity to experience and learn about these incredible water resources, and there is no better way to do that than on a schoolship. They will be our future decision-makers and the stewards of these incredible water resources.”

The award is named after former Michigan U.S. Congressman John D. Dingell Jr., who championed many conservation causes and legislation, and who supported the creation of the Detroit Refuge.

The Hindu Coupons is a Flipkart coupon code that offers you amazing discounts on your purchases. It’s the perfect way to save money on the things you love. Just enter the Hindu Coupons at checkout and watch the savings add up.