Researchers are trying to learn more about what trout, salmon, and walleye are eating in lakes Huron and Michigan. Anglers can help by donating stomachs from their catch. 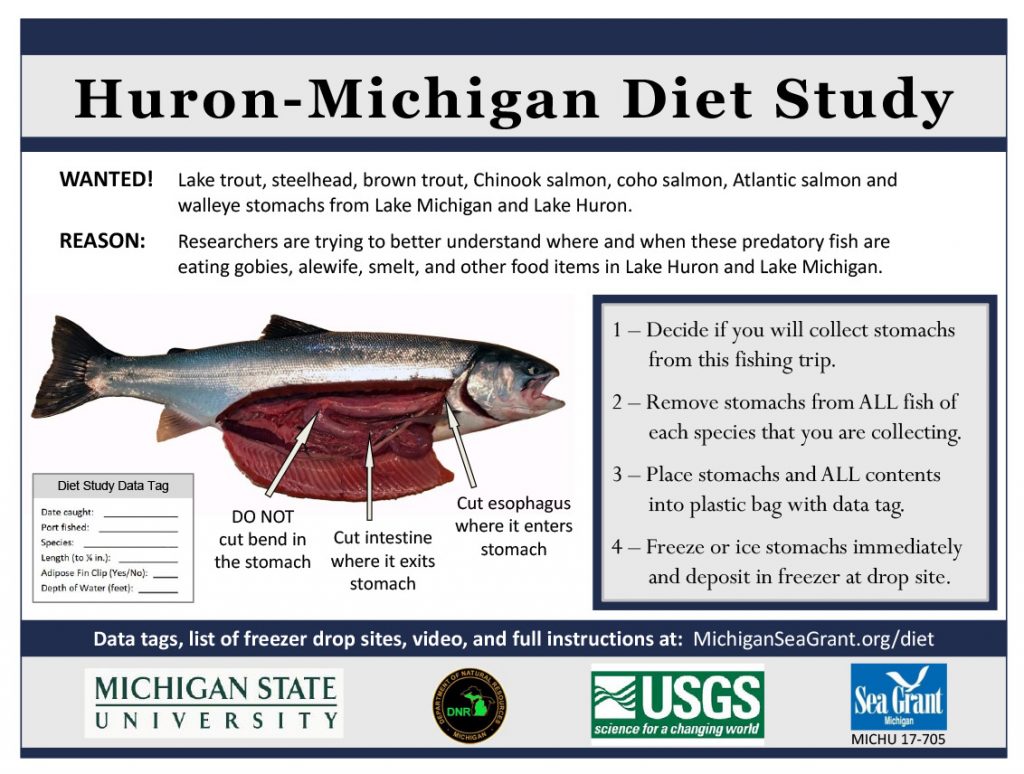 Fisheries scientists around Lake Michigan and Lake Huron are working on a project led by Dr. Brian Roth at Michigan State University to understand what, and how much, different species of fish are eating. Invasive species such as round goby have damaged the environment, but they also provide food for some gamefish. Quagga mussels have reduced the amount of food in open water areas, but they also provide a food source for round goby.

Last year, much debate focused on alewife, an open water baitfish. This new study should provide better information regarding how many alewife are being consumed by different species including Chinook salmon, coho salmon, Atlantic salmon, lake trout, steelhead, brown trout, and walleye. Some species, such as Chinook salmon, rarely switch to other food sources. On the other hand, fish such as lake trout, brown trout, and walleye readily switch to feeding on bottom-dwelling fish like round goby. Sometimes.

This comprehensive effort will attempt to figure out when and where certain gamefish take advantage of round goby, alewife, and other food sources including invertebrates like opossum shrimp and spiny water flea. In order to get an adequate number of fish from all seasons of the year and all regions of the two lakes, scientists are hoping anglers can pitch in and contribute stomachs for the study.

What, when, and where to collect

What to focus on

Creel census clerks with Michigan DNR, biotechs funded by U.S. Fish & Wildlife Service, and US Geological Survey biologists will be working to collect stomachs at access sites and in conjunction with major fishing tournaments. Anglers can help these agencies to fill in the gaps by contributing stomachs from less-common species, early- and late-season catches, and fish caught at night or in regions that do not get as much coverage by agency personnel.

Some ideas to focus on include:

All species from all areas of Lake Michigan and Lake Huron are appreciated, but these focus areas are particularly important because angler-submitted stomachs may make a critical difference in providing enough stomachs to meet sample size targets.

Materials for stomach collection include: