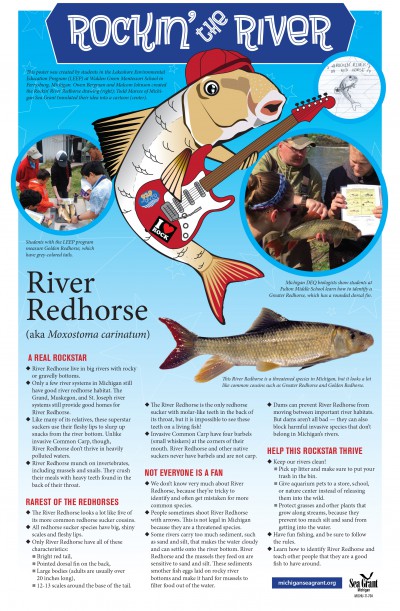 A threatened fish called the River Redhorse is the latest subject of the Native Fish Heroes poster series.

The River Redhorse suffers from a case of mistaken identity. Even though it is a native fish that requires clean flowing rivers, many people mistake the River Redhorse for invasive carp or other native suckers that can tolerate polluted water. In fact, the River Redhorse is listed as a threatened species in Michigan and is only found in a handful of large, rocky rivers.

Students participating in the Lakeshore Environmental Education Program (LEEP) at Walden Green Montessori School in Ferrysburg had a chance to get to know the River Redhorse this spring. They learned how to identify closely-related species and teamed up with Michigan Sea Grant to teach others why the River Redhorse is so rare.

The River Redhorse is one of six species of redhorse sucker living in Michigan waters. Some of the other species are very common, and fishing regulations allow for unlimited harvest of other sucker species using a variety of gear including spears, bows and arrows, certain types of nets, and hook-and-line. Suckers are bony but very good to eat when canned or ground. Unfortunately, the River Redhorse is easily mistaken for other species and is sometimes harvested along with other sucker species.

Worse yet, some people mistakenly believe River Redhorse are a harmful or invasive species. They get to be fairly big (over 30 inches long) and could be confused with invasive common carp. Perhaps this is one reason why River Redhorse are sometimes left on the bank to rot.

River Redhorse need clean-swept rocky areas to spawn. Many large rivers suffer from pollution in the form of silt and sand that washes in from eroding banks, city streets, and agricultural land. This “nonpoint source” pollution can smother eggs and also harms native filter-feeding mussels. The River Redhorse feeds heavily on native mussels, and the decline of mussels in many areas of the eastern United States may be one reason for the rarity of River Redhorse.

Even though River Redhorse are not common anywhere, there are three Michigan river systems that still provide good habitat and support breeding populations: the Muskegon River, St. Joseph River, and Grand River.

Students at Walden Green attend school near the mouth of the Grand River, one of the last places in Michigan to find River Redhorse. By highlighting threats and suggesting ways that people can help to keep our rivers clean, the students hope to help protect this local treasure. They even came up with a “Rockin’ River Redhorse” theme poster, which emphasizes the fish’s need for clean, rocky habitat.

The River Redhorse poster is the second in Michigan Sea Grant’s Native Fish Heroes poster series. The Lake Sturgeon was the first poster created, and other teachers around Michigan have expressed interest in tackling Cisco, Smallmouth Bass, and Burbot. If you teach at a K-12 school and have a local connection to one of our fascinating native fish species, contact Michigan Sea Grant for additional details.