Lake Michigan kings are back — but why?

After the gloom-and-doom of 2016, anglers are gearing up for a much better run of salmon in 2017. Recent trends in the fishery suggest that ups and downs may be the new norm if prey populations do not stabilize. 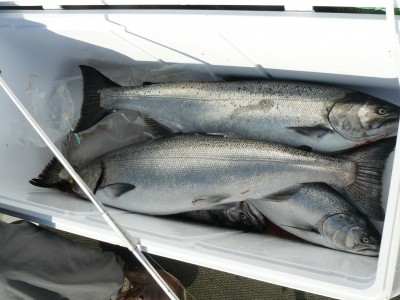 Chinook salmon from the 2014 year-class are now Age 3 and they seem to be providing very good fishing in Lake Michigan. File photo: Michigan Sea Grant

Spread the word!  Lake Michigan kings are back — for now.

After a couple of disappointing years of fishing for Chinook salmon along the Michigan shoreline of Lake Michigan, anglers are once again excited about the late-summer bonanza that these “king” salmon provide. While the final estimates of angler harvest and catch rates will not be available from Michigan DNR and other agencies until spring, the long lines of heavy coolers at fish cleaning stations and full boards of fish are a very good sign.

The size of fish is even more impressive. Ever since bacterial kidney disease (BKD) ran through the Chinook salmon population in the late 1980s, king salmon over 30 pounds have been rare to nonexistent in most years. This year has already produced numerous 30 pounders and even one giant that tipped the scales at 41.48 pounds (see details).

While fisheries scientists do not have a definitive answer to this question, there are several factors that at work. Many relate to the poor year-class of Chinook salmon in 2013. Many anglers will remember the public process that led up to the 46 percent reduction in Chinook salmon stocking for 2013. On top of this stocking cut, natural reproduction fell by an estimated 84 percent in 2013. All told, the number of Chinook salmon entering Lake Michigan dropped from 10.68 million in 2012 to 3.5 million in 2013.

This weak 2013 year-class was a big factor in the poor fishing experienced last year because Age 3 fish from the 2013 year-class were returning to spawn in 2016. The good news is that wild reproduction increased slightly in 2014 and the total number of Chinook salmon increased to 6.47 million (stocking remained steady from 2013 to 2014).

Chinook salmon from the 2014 year-class are now Age 3 and they seem to be providing very good fishing. Fisheries managers have been trying to balance the number of predators and available prey for decades, and judging by early reports it seems that the current balance is providing a nice mix of good catch rates and large, healthy salmon. However, this does not mean that the future of the Lake Michigan fishery is secure.

Ups and downs may be the new norm

Growth of salmon has been bouncing up and down like a ping pong ball over the past decade. The growth rate of fish is a good indicator of their overall well-being and ability to find enough food, so this means that conditions are changing a lot from one year to the next.

Fisheries managers look at the weight of mature Age 3 female Chinook salmon returning to weirs and harbors as a standardized measure of salmon growth in Lake Michigan. In 2015, the average weight of an Age 3 female was 13.1 pounds. This increased to 19.0 pounds in 2016. That is a huge difference!

Such radical and rapid shifts in growth rate indicate instability in the ecosystem. In other words, food availability is changing a lot from one year to the next. Some of this is related to changes in the number of predators (especially the big fluctuations in wild Chinook salmon production) but fluctuations in the availability of alewife (the salmon’s food source) are a bigger problem.

In short, small alewife are relatively abundant in some years and provide a lot of food for salmon. In other years, alewife do not produce as many young and salmon have trouble finding food. A big problem in recent years is that alewife do not often survive to spawn several times. Instead, nearly all alewife are eaten before they reach Age 5.

Not coincidentally, the last really good alewife year class we had was in 2012. The alewife from that 2012 year-class are now Age 5. If some of them are able to avoid all of the hungry mouths out in the big lake until next year then we may finally have some Age 6 alewife in Lake Michigan once again.

This would be a good sign for overall stability of predator-prey balance in the lake, but it is by no means guaranteed. Prior to 2000, alewife of Age 6, 7, and 8 were fairly common and in some years Age 9 alewife were also found. We are still a long way from that level of stability in older alewife.

Judging by recent history, the boom times will not last long. Get out there and enjoy it while it lasts, and remember the good times next time we have a tough season.