First- and fifth-grade students remove invasive species from Great Lakes watershed, clean up along the Thunder Bay River — and captured it all on film. 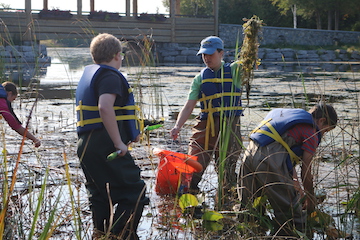 More than 100 first- and fifth-graders from Alpena Public Schools got their feet wet this fall contributing to an invasive species removal effort in their local watershed. Visiting the Alpena Wildlife Sanctuary and the Maritime Heritage Trail along the shores of Thunder Bay River these students removed more than 1,000 pounds of invasive European frogbit, conducted litter cleanups, and did a little filmmaking to raise public awareness about their project.

Removal of European frogbit, newly found in the Thunder Bay watershed, took center stage as the primary stewardship project for participating students. This invasive plant grows in large, thick mats that block sunlight to the aquatic plants beneath it; therein threatening the health of surrounding plants and aquatic wildlife. Community and conservation leaders – with helping hands from these students – have prioritized removal efforts to help reduce and prevent the spread of this new invader to the local watershed. Student efforts contributed in accomplishing the Huron Pines frogbit challenge, where the collective community (with students) worked together to remove close to 3,500 pounds in 2017.

To get the ball rolling, fifth-graders from Hinks Elementary visited Duck Park where they donned waders and life jackets, grabbed rakes and buckets, and after learning to identify frogbit, started pulling the plant. Two hours later, they had pulled close to 500 pounds of frogbit from the river. Arriving later in the afternoon that same day, fifth-graders from Besser Elementary removed more frogbit, and also conducted an Alliance for the Great Lakes Adopt-A-Beach litter clean up along the Thunder Bay River. Over the course of three hours they picked up more than 12 pounds of trash and removed more than 700 pounds of frogbit. Meanwhile, on the Maritime Heritage trail, first-graders from Lincoln Elementary removed nearly 20 pounds of frogbit and eight pounds of trash along the river. 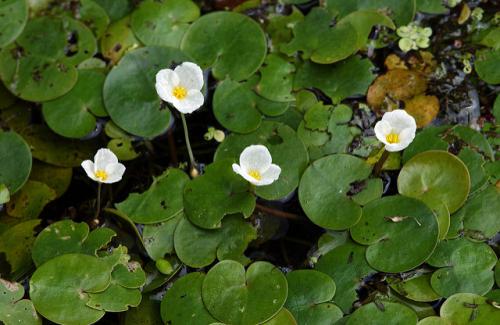 Throughout the day students shared their experience with local media – but also collected their own photos, video footage and interviews using iPads provided through the Northeast Michigan Great Lakes Stewardship Initiative (NEMIGLSI) in order to share their stories. Students provided a public service by removing invasive species and they also learned the importance of raising community awareness on these issues. They hope to produce a short film highlighting the dedication of their class, teachers and community partners to keeping our Great Lakes clean and free of invasive species.

A great example of place-based stewardship education in action, this experience offered opportunity to expand students’ learning beyond the four walls of the classroom while partnering with their community to accomplish this river habitat improvement goal. These enthusiastic students from three different schools collectively engaged in a fun-filled, hands-on learning experience while enhancing the Thunder Bay watershed and Lake Huron habitats within their own local Alpena community.

Teachers from Besser, Hinks and Lincoln Elementary schools facilitated this effort through the NEMIGLSI network and partnership.