New book about amphibians and reptiles a good read

“Amphibians and Reptiles of the Great Lakes Region, Revised Edition” offers readers a glimpse into the world of herpetofauna 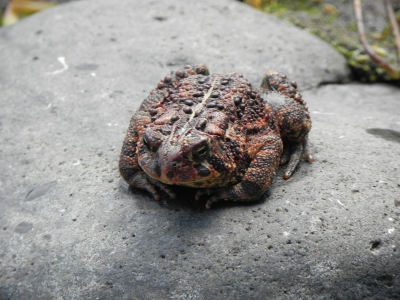 An American Toad is one of the Great Lakes amphibians featured in a newly revised book. Photo: Mary Bohling, Michigan Sea Grant

Growing up in Michigan, I recall encounters with some special amphibians and reptiles including Spring Peepers in the Les Chenaux Islands, Eastern Fox Snakes along the Lake Erie shoreline, Mudpuppies, and Blanding’s Turtles in the Detroit River and American Toads on Isle Royale. Recently I read a newly revised edition of the book, “Amphibians and Reptiles of the Great Lakes Region,” by James H. Harding and David A. Mifsud, which helped me learn even more about the creatures I’ve seen over the years.

The book includes range maps, photos and other key information for each reptile and amphibian species known to occur naturally within the Great Lakes basin along with limited information for marginal and questionable species. Also included are definitions to help readers understand these often mysterious and misunderstood species.

The concept of “herp-watching” (think bird-watching but substitute animals with feathers for those with scales, slimy skin or shells) is also discussed. This recreational hobby offers an alternative to keeping amphibians and reptiles as pets. Herp-watchers can also play an important role in protection and conservation by documenting observations using web and mobile apps such as the Michigan Herp Atlas.

The conservation section for each species explains the animal’s relationship with humans such as economic importance, population trends, threats posed by human activities and possible management strategies. One of the things I found interesting in the habitat and ecology section was the feeding behaviors of some of the species, particularly those that rely on smell and sound to detect prey. I especially liked reading about the Kirtland’s snake because, although its range includes where I live in southeast Michigan, I had never even heard of the species. This little secretive snake lives most of its life below ground in burrows constructed by other animals or under leaf piles, rocks and logs and can flatten itself and become immobile when threatened.

Harding and Mifsud have compiled a wealth of herpetofauna information of use as a reference to non-specialists as well as professional herpetologists. I would recommend this book to anyone with a curiosity about or passion for amphibians and reptiles.