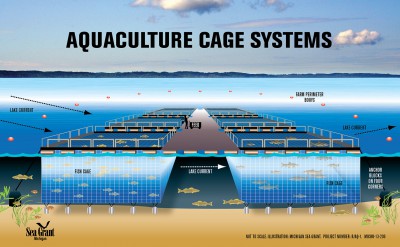 In the last several years there has been a great deal of discussion about net-pen aquaculture in the Michigan waters of the Great Lakes. Much of the attention about Great Lakes net-pen aquaculture is the generation of large quantities of fish waste from these fish production operations as well as the consequences if these fish escape into the environment. The main issue with fish waste is the release of phosphorus which is the growth limiting nutrient for primary production in freshwater ecosystems. Although some phosphorus is necessary to drive the freshwater food chain, concern arises when excess amounts of phosphorus are available which can result in significant algal blooms and other aquatic plant growth. In addition there is a concern about fish diseases and genetics, which may be the consequence of the interaction of fish raised in Great Lakes net pens and native fish in the surrounding environment.

To address these concerns Michigan Sea Grant was invited to speak at the 28th Annual No-Spills Conference in January 2018, to discuss environmental issues surrounding net-pen aquaculture in the Great Lakes. Currently there are seven net-pen aquaculture operations that exist in northern Lake Huron on the Canadian side of the lake. These operations are sustainably producing more than 5,000 tons of rainbow trout per year with some being sold in retail markets in Michigan. They provide 340 direct and indirect jobs with a $100 million contribution to the Canadian economy. These net-pen aquaculture operations take up a small footprint in the environment; one of these operations that produces 500,000 pounds of rainbow trout per year would fit into an average size Michigan marina.

Fish disease risks and genetic dilution can be minimized

For Great Lakes net-pen aquaculture to be environmentally sound it must have practices that prevent disease transmission and escapement of fish into the wild, as escapees could affect the genetic integrity of surrounding fish populations. These operations must also be non-polluting with minimal and recoverable impacts. With regards to fish diseases, the commercial aquaculture industry is highly regulated and is held to the same standards as state and federal hatchery programs. Fish disease risks are minimized and prevented through regulation, biosecurity, and best management practices.

In 2014 the state of Michigan stocked more than 20 million fish, produced from gametes collected from wild fish. This equated to 325 tons of fish stocked, 9 different species, 370 stocking trips, 732 stocking sites, with 100,000 miles of travel from several fish hatcheries. In comparison Canadian net-pen operations in Lake Huron typically stock one cohort, certified as specific pathogen free, then raise the fish to harvest and truck them one way to a fish processing facility. The net results are that Michigan hatcheries have a much higher risk of disease transmission than the current system for growing trout in Canadian net pens.

The Great Lakes already have rainbow trout which are non-native to the region. They were introduced by fishery management agencies years ago and many of these fish are now naturalized, spawning on their own in local rivers, with additional enhancement from government fish hatcheries. Rainbow trout produced in Great Lakes net-pen operations can be female triploids which are sterile and will not reproduce should they escape into the environment. So the risk of genetic dilution can be eliminated by use of these female triploid rainbow trout.

Canadians have had net-pen aquaculture operations in their northern waters of Lake Huron since 1982. To help address the issue of excess phosphorus discharge from freshwater net pens, Fisheries and Oceans Canada completed a study on Freshwater Cage Aquaculture: Ecosystems Impacts from Dissolved and Particulate Waste Phosphorus. Fish receiving digestible phosphorus in specific amounts to meet their growth requirements excrete only small amounts of dissolved phosphorus. Dissolved phosphorus is most often the form of concern in impaired waters. The other form of phosphorus excreted from fish is particulate phosphorus which settles to the bottom sediments. The particulate phosphorus which accounts for the majority of the waste from net-pen operations is transported to the bottom sediments and is not immediately available for uptake into the ecosystem. In sediments it can be consumed by the benthic organisms and enter the aquatic food chain. Both dissolved and particulate phosphorus wastes produced by fish are the results of the diets they consume. The development of low phosphorus, highly digestible diets has been a tool to help minimize phosphorus waste by aquaculture operations.

The Fisheries and Oceans Canada study found that based on net-pen aquaculture production in northern Lake Huron in 2006 contributed about 5 percent of the annual total phosphorus loading to the North Channel. The study concluded that the likelihood of phosphorus additions to the environment from net-pen aquaculture operations resulting in eutrophication to Canadian freshwater environments under the current level of fish production can generally be characterized as “low.” The greatest concerns for phosphorus are in the nearshore areas where excess aquatic plant growth can foul the shorelines. In contrast, offshore phosphorus loading is of less concern and higher phosphorus concentrations may be considered a means to help mitigate declining populations of forage fish and the poor condition of sport and commercial fish species.