Who’s who in the Great Lakes? 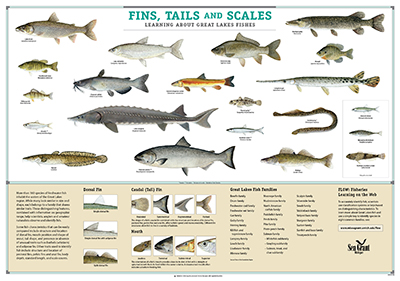 National Invasive Species Awareness Week is Feb. 26 to March 2, 2018. The goal is to draw attention to invasive species and what individuals can do to stop the spread and introduction of them. This effort is sponsored by a diverse set of partners from across the country. To increase awareness of Michigan’s invasive species, Michigan State University Extension and Michigan Sea Grant are publishing a series of articles featuring resources and programs in our state working on invasive species issues.

Invasive species are plants, animals, and other organisms that are not traditionally found in a given location (in this case the Great Lakes) AND are having a negative impact of some kind, whether ecological, economic, social, and/or a public health threat

Today’s article takes a look at a few of the invasive fish species living in our Great Lakes. Michigan Sea Grant’s poster Fins, Tails and Scales – Learning about Great Lakes Fishes is a great resource for learning how to tell the difference between them.

There are more than 160 species of fish that inhabit the waters of the Great Lakes region. While many look similar in shape and size, each belongs to a family that exhibits particular characteristics. These distinguishing features, combined with information on geographic range and behavior, help us observe and identify specific species. A native fish is one that traditionally belongs in the Great Lakes.

The Fish, Tails and Scales poster provides specific information about invasive fish species, the harm they are doing, how they likely came to be in the Great Lakes. It also has identifying characteristics and efforts to remove them or prevent them from spreading to uninfected areas. Here are just two of the invasive species that cause problems in our Great Lakes:

The Michigan Department of Natural Resources provides distribution maps and scientific illustrations of species from “An Atlas of Michigan Fishes with Keys and Illustrations” as an aid in identification.