Projects on the Detroit River take a break over winter, but more are planned for 2019. 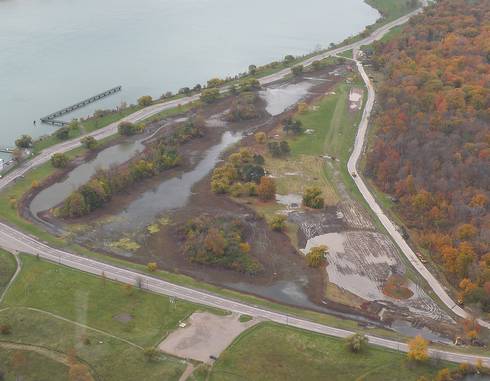 Completed in 2018, the Lake Okonoka project includes restoration of 45 acres of aquatic and upland habitat. Photo credit: Friends of the Detroit River

A 4-acre fish spawning reef offshore of Fort Wayne was completed by the University of Michigan Water Center, Michigan Sea Grant, US FWS, USGS and other partners. This 2018 project brings the total number of fish spawning reefs constructed through this Detroit River partnership since 2003 to six for a total of more than 15 acres. 2018 also brought great news regarding the use of the constructed spawning reefs. It was the first time that fertilized eggs from the endangered lake sturgeon were found on all constructed reefs in the Detroit River.

More than 100 acres of coastal and upland habitat were enhanced and protected as a result of this project that was completed in the spring of 2018. The project increases ecological benefits for fish and wildlife including the re-establishment of spawning and nursery habitat for commercial, sport and forage fish species; revitalization of coastal wetlands; and protection of terrestrial resources within the Detroit River watershed. The project included construction of 3,500 linear feet (LF) of continuous rock shoals and 600 LF of shoal islands with nesting habitat for common terns; 92 habitat structures for mudpuppies, turtles and fish including rock piles, basking logs and woody debris bundles; creation of 50 acres of calm backwater for fish spawning and nursery activity; 10 acres of vegetation management including invasive species control; and protection from erosion for 52 acres of island habitat.

Habitat restoration on and around the island is currently underway. Construction of 4,000 linear feet of rock shoals will be halted as winter sets in but will begin again in the spring of 2019. When completed in 2019, more than 100 acres of coastal wetlands, hibernacula for snakes, turtle nesting beaches, and common tern nesting areas will have been created.

Approximately 25 acres of wetlands, upland prairies and other habitat types will be constructed in 2019 at A.B. Ford and Lakewood-East Parks. In 2018, contractors hired by the US Environmental Protection Agency completed design plans to create habitat for fish, birds, reptiles, amphibians and pollinators. The city of Detroit also recently announced plans to add new playground equipment and other public amenities to the parks.

Through National Fish and Wildlife Funding (NFWF) via the Great Lakes Restoration Initiative (GLRI), the Michigan Department of Natural Resources restored native habitats on nearly an acre of property in 2018 at Milliken State Park located in downtown Detroit and directly across from the Outdoor Adventure Center. The property, previously lawn and filled with invasive species, was restored to a wet meadow and prairie complex including a mass shrub planting along the Detroit River and small trees that will eventually line an existing walkway with shade as they grow.

Completed in 2018, this project includes restoration of 45 acres of aquatic and upland habitat. Lake Okonoka’s enhancements combined with the recent opening of Blue Heron Lagoon (another 41 acres) to the Detroit River will increase the availability of calm spawning and nursery habitat for Great Lakes fish. Deep water pools, basking logs and other habitat features will also benefit turtles, mudpuppies, snakes, mammals and birds. Completion of a new direct connection from Lake Okonoka to the Detroit River is expected to occur in 2019.

Design plans for 280 acres of wet-mesic flatwoods on Belle Isle were completed in 2018. Permits will be applied for by the Michigan DNR Parks staff who will also secure construction funding. The project is expected to get underway in 2020, pending funding availability.

The design portion of the project, estimated to be about 40 acres of coastal marsh, is currently underway with field data being gathered. Feasibility and design are expected to be completed mid-2019 with construction happening once permits and funding are secured.

More than 60 people attended a public meeting on Nov. 14, 2018, to talk about the preliminary results of a feasibility and design project at Sugar Island. The island is owned and managed by the U.S. Fish & Wildlife Service as part of the Detroit River International Wildlife Refuge. Design plans were completed in 2018 that include the creation of rocky shoals, protection of bluffs and other habitat features. Permits will be sought in 2019 with construction expected to begin late 2019 or early 2020, pending funding.

Find more information about many of these habitat projects can be found on the Friends of the Detroit River Projects webpage.