Part 1: What is the difference between exotic, nonindigenous, non-native, alien, nuisance, and invasive species? 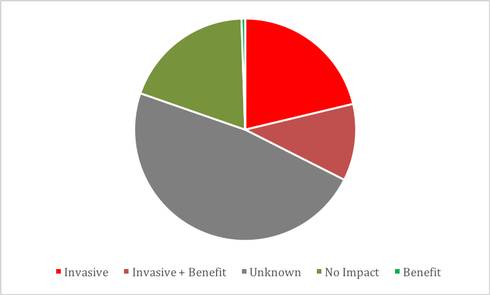 190 established nonindigenous species of the Great Lakes classified by impact.

National Invasive Species Awareness Week is Feb. 25-March 3, 2019. The goal is to draw attention to invasive species and what individuals can do to stop the spread and introduction of them. This effort is sponsored by a diverse set of partners from across the country. To increase awareness of the issues, Michigan State University Extension and Michigan Sea Grant are publishing articles featuring resources and programs in our state working on invasive species issues.

One of the greatest challenges faced in using science to guide policy is the problem of language barriers: when scientists, policymakers, press, and the general public work together on problems of common interest, such as invasive species, it is increasingly critical that we all use a common language to avoid misunderstandings. In this article, we examine some of the most common words used (and misused) in talking about the problem of invasive species. We recommend that legal definitions, where available, be considered first when addressing mixed audiences, and that careful attention be paid to avoid misunderstanding when dictionary definitions differ from the use of the word within the context of discussing invasive species.

What is the difference between exotic, nonindigenous, non-native, alien, nuisance, and invasive species?

In general, these terms all refer to plants, animals, or microscopic organisms living outside their native range. Among these terms, the major difference is between ‘nonindigenous’ and ‘invasive.’

A ‘nonindigenous’ species is an organism (plant, animal, microbe) found living beyond its historic native range, which is usually taken as the area where it evolved to its present form. Executive Order 13112 of February 3, 1999, defined ‘alien’ species as “any species, including its seeds, eggs, spores, or other biological material capable of propagating that species, that is not native” to the particular ecosystem in which it is found. Thus, alien can be used interchangeably with nonindigenous. The term non-native is a synonym for nonindigenous. So nonindigenous = alien = non-native. ‘Exotic’ is also used primarily as a synonym for nonindigenous – however, depending on context, the word ‘exotic’ is more likely to be used in a favorable sense of a species being valued because it is different.

Public Law 101-636 (Nonindigenous Aquatic Nuisance Prevention and Control Act of 1990) defined an aquatic nuisance species as a nonindigenous species that “threatens the diversity or abundance of native species or the ecological stability of infested waters, or commercial, agricultural, aquacultural or recreational activities dependent on such waters.” This was a narrower definition of nuisance than typically used previously by scientists or the general public, and excluded problematic native species (such as mosquitos and poison ivy) from being legally considered ‘nuisance’ species. Executive Order 13112 defined invasive species as “an alien species whose introduction does or is likely to cause economic or environmental harm or harm to human health.” Legally, ‘nuisance’ and ‘invasive’ are near synonymous. The change in legal terminology from ‘nuisance’ to ‘invasive’ was in part a recognition of the misunderstandings that had been created when the legal definition of ‘nuisance’ in the context of the problem of non-native species diverged from the dictionary definition of ‘nuisance’ and even within other legal contexts. Because of differing uses of the word ‘nuisance’ (legal versus dictionary), it is now used less frequently than ‘invasive’, with use mainly limited to programs (such as the national Aquatic Nuisance Species Task Force and the Great Lakes Panel on Aquatic Nuisance Species) which were created by the laws that use the term ‘nuisance species.’

‘Invasive species,’ however, is not without problems of its own: older scientific literature, particularly in the field of botany, used the term as a descriptor for a growth form, such as a vine that could grow over another plant or one that was capable of “invading” an established community – and in this older scientific literature, these organisms were often native species. Thus, when reading anything published pre-1990, one should be very careful to not assume that the author intended the modern definition.

The term ‘invasive’ is severely overused – very often we see reference to “invasive” species (or even just “invaders”) when the subject is actually nonindigenous or non-native species. Another confounding factor occurs when we don’t know whether or not a species is really causing harm, or when it isn’t yet causing harm but is predicted to do so in the future if the populations continue to expand unchecked. In these instances, managers may refer to efforts as “invasive species control” even though they are actually working to prevent a nonindigenous species from becoming invasive.

How many invasive species are in the Great Lakes?

That’s a question that we and other scientists in the region have been trying to answer since at least the early 1990s. It is a much more difficult question to answer than it first appears. Our NOAA GLANSIS project identifies 187 established aquatic nonindigenous species.  To get that number, we first had to define nonindigenous (the Great Lakes only formed about 14,000 years ago, so we can’t use a definition of native that is older than that – for practical purposes, we use the surveys of the early 1800s as our baseline), then define Great Lakes (we use the ordinary high water mark), aquatic (our count doesn’t include birds, mammals, reptiles, amphibians or other taxa that spend only a part of their life cycle in the water) and established (we use a definition based on evidence of reproduction). Unfortunately, this number is often misquoted as ‘187 invasive species’ — which we hope by this point you know probably isn’t accurate. Over the last decade, we have been gathering evidence to determine the impact of these nonindigenous species. Some have very clear evidence of environmental and/or socioeconomic harm, while others have stayed relatively rare and, despite careful studies, appear not to have significant impacts. However, large numbers still have not been studied sufficiently to determine exactly what they are doing (or what they could do if populations expand) to be classified one way or another. Our current best estimate is that at least 61 and perhaps as many as 150 species meet the legal definition of ‘invasive.’