What does it take to make 10 pounds of salmon?

The new edition of “The Life of the Lakes” from Michigan Sea Grant explores how much food Great Lakes gamefish really need. 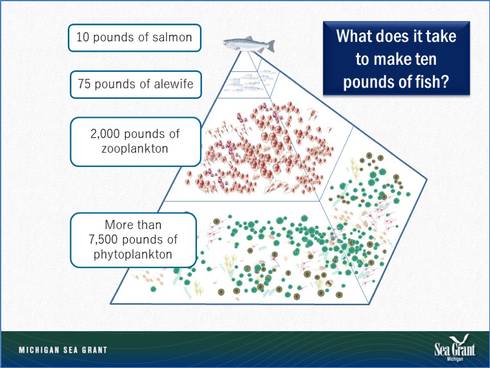 In order to produce gamefish like trout and salmon, a lake must be able to produce the food source for these large predators. Nearly all life in the Great Lakes is dependent upon tiny, single-celled algae known as phytoplankton. These microscopic life forms produce their own food using the sun’s energy, just as rooted plants like grasses and trees do in more familiar environments on dry land.

Looking across the landscape of an African savannah, we can easily see that grasses are far more numerous than grazing animals like zebras or gazelles, and top predators like leopards and lions are rarer still. In the Great Lakes, it is much more difficult to visualize exactly how much life is needed to sustain top predators like trout and salmon because the base of the food pyramid is invisible to our eyes.

Just because plankton are small does not mean they aren’t important, though.

Michigan Sea Grant’s newly-revised fourth edition of The Life of the Lakes illustrates just how important plankton are with a figure that helps us visualize just how large the “base” of the food chain must be in order to support top predators like salmon.

In ecology, links of the food chain can also be thought of as levels in a pyramid. The base of the trophic (or food) pyramid always contains the primary producers like plants or phytoplankton. The next higher level of the pyramid is much smaller due to the loss of energy. In general, around 90 percent of energy is lost at each link in the food chain as waste heat and unavoidable inefficiency.

Charles Elton, one of the early pioneers of ecology, coined the term “pyramid of numbers” when he first described the concept of the trophic pyramid in 1927. Later researchers realized that a “pyramid of biomass” was often a better way to illustrate the large base of the pyramid. This is because a pyramid based on number of animals will be very sensitive to the size of individual animals. The pyramid of biomass reflects the weight (or mass) of all individuals at each level of the food chain. This provides a snapshot in time of the “standing stock” of all living things at each level.

In Lake Michigan, fishery managers rely on calculations of prey fish and predator fish biomass to produce a predator-prey ratio each year. The standing stock of prey fish (alewife) to predators (chinook salmon) is considered dangerously low if it falls below 10:1, which is very consistent with research done on a variety of other ecosystems.

This is based on the tip of the “pyramid of biomass,” which uses the weight of the standing stock of alewife and chinook salmon. For salmon and alewife, this works nicely. However, the lower levels of the pyramid of biomass actually begin to decrease in size.

For example, Lake Michigan chinook biomass averaged 4.6 pounds per acre in 1985-1990. Based on the 10:1 rule, we would expect more than 46 pounds of alewife per acre and over 460 pounds of zooplankton per acre. The actual biomass density of zooplankton averaged only 27 pounds per acre. This would be impossible to sustain were it not for the short generation time and high productivity of plankton.

Pyramids based on standing stock of biomass or numbers if individuals are useful tools for conceptualizing ecosystems, but none of these gives us a quick view of how much food really goes into producing a single gamefish. That is why a “pyramid of consumption” was used to visualize the resources that are required to produce ten pounds of salmon.

So, what does it take to make 10 pounds of salmon?

It takes roughly one ton of zooplankton and over three and a half tons of phytoplankton to produce a single 10-pound salmon under ideal conditions.

Chinook salmon in Lake Michigan provided a convenient example for the pyramid of consumption because they feed almost exclusively on one species of prey fish (the alewife). Alewives feed primarily on zooplankton. This makes it relatively easy to figure out how much zooplankton is needed to produce 10 pounds of salmon based on the gross growth efficiencies (GGEs) for salmon, alewife, and zooplankton.

This provides a clean and simple picture of the pyramid, but the food web in Lake Michigan is quite a bit more complicated than this simple picture. For example, alewives also feed on the opossum shrimp (Mysis), and Mysis often feed on zooplankton. To complicate matters even more, some of the zooplankton eaten by alewives nowadays are invasive spiny water fleas, which are voracious and extremely inefficient plankton-eaters. Although spiny water fleas are themselves zooplankton, they feed on smaller zooplankton, and therefore represent a new level of the food pyramid between alewife and native zooplankton. Amazingly, one study showed that spiny water fleas are so inefficient that they consume 100 times more zooplankton for their weight than fish do in Lake Huron, and 17 times more zooplankton than our native Mysis shrimp!

Unfortunately, these complications in the food web make it very difficult to calculate and visualize exactly how the pyramid looks. Even so, the pyramid of consumption offers a simplistic basis for conceptualizing the food resources necessary to produce Great Lakes gamefish.