Preliminary results show revenues were down over $6 million from 2019, but fishing was beginning to bounce back by late summer.

This year has been a hard one for many small businesses, and Michigan’s charter fishing industry is no exception. In addition to dealing with high water levels and the usual ups and downs of weather patterns and fish populations, charter captains had to contend with COVID-19, the infectious disease caused by novel coronavirus, and related restrictions. Michigan Sea Grant conducted a series of surveys on Michigan’s charter fleet during 2020, and preliminary results reveal the impact of the pandemic.

By the end of June, 32% of captains had not taken a single charter fishing trip during 2020. On average, captains were down a total of 15 trips during the early part of the 2020 season. When restrictions were relaxed later in the season, many captains expressed concern regarding guidance that left captains and customers unsure of the legality and safety of operating a charter fishing business. Charter fishing provisions from Michigan DNR were updated in August to clarify that charter boats could legally operate even if social distancing was not possible onboard, so long as masks are worn. 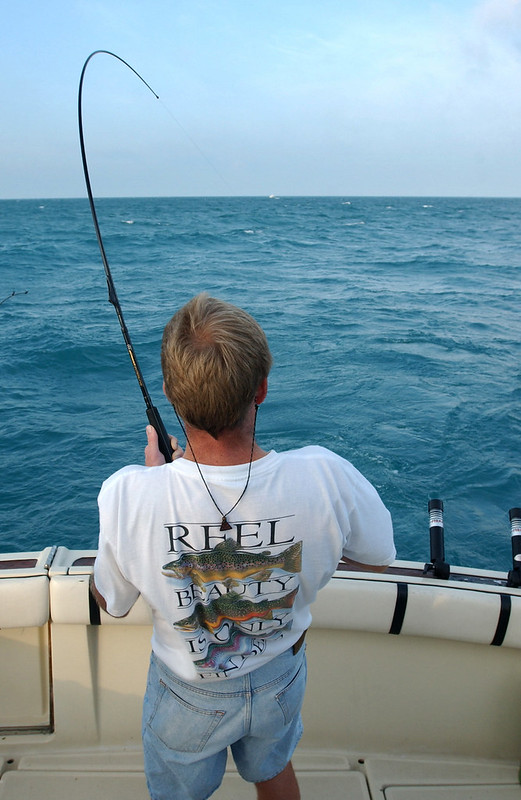 Due to declining trip numbers, revenues from charter fees also declined substantially. The average captain lost $10,711 in revenue during the 2020 season, which means that Michigan’s charter fishing industry as a whole lost $6.05 million in charter fees this year. Due to ripple effects and economic multipliers this has a much greater impact on coastal communities, but the old equations don’t necessarily hold up in 2020 because other businesses like hotels and restaurants were often impacted by different restrictions than the charter industry.

Although this was a very challenging year, survey results also speak to the resilience of the industry. When asked about their five-year plans, 8% of captains planned to sell their current boat. Thirteen percent planned to quit the business altogether. Although this may sound like a high number, previous surveys from 2002 and 2011 found that 18 to 21% of captains plan to quit during “normal” years. Even so, our October survey revealed that most captains are cautious about expanding their operations any time soon. For example, previous surveys found 14% of captains planning to buy a bigger boat and this declined to 4% in 2020.

Uncertainty has been the one constant in 2020, and while there is some cause for optimism in 2021 there is still much uncertainty. Some captains were seeing increased bookings toward the end of the year, with 4% of captains reporting that bookings for next season were 25-50% above what they expected at this time of year. However, 34% reported a 25-75% decline and 14% reported a 100% decline in bookings. The remaining 48% reported that bookings for 2021 are about what they would expect.

As captains are wondering what next year will bring and dealing with revenue shortfalls from 2020, it is worth mentioning that $300 million in federal funding from the CARES Act was specifically dedicated to assistance for marine fisheries participants, including charter boat operators. Under Section 12005, many states and territories were allocated from $1 million to $50 million, but Michigan was left out because Great Lakes fishery assistance was not included. As Congress is currently debating a second round of stimulus funding, it is possible that future funding might help to alleviate some of the financial woes experienced by Michigan charter operators.