Despite some successes, new species are still being introduced to the Great Lakes.

By El Lower and Rochelle Sturtevant 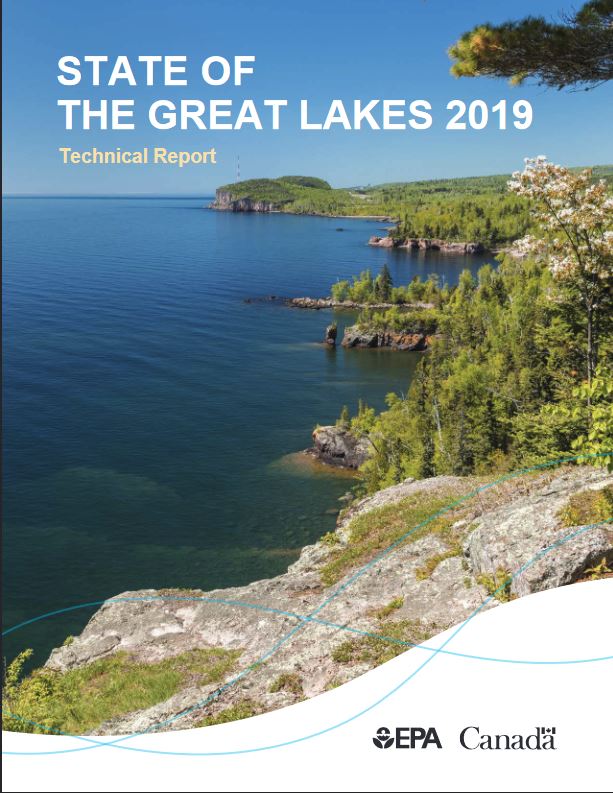 The 2019 State of the Great Lakes (SOGL) Technical Report has just been released, documenting an overview of the status and trends in various components of the Great Lakes ecosystem. A joint collaboration between the U.S. and Canadian government focusing on Great Lakes water quality, more than 180 researchers on both sides of the border contributed to these reports. While many of the Great Lakes indicators have shown improvements in the last several years, invasive species continue to be one of the most challenging issues facing the region.

With more than 185 aquatic invaders already identified in the Great Lakes basin and the ever-present threat of new species being introduced, this indicator has been assessed as “poor” and is on a deteriorating trend — highlighting the continued need for vigilance in the management and prevention of aquatic invaders.

The news isn’t all bad — ballast regulations have been incredibly successful in reducing the introduction of non-native species from transoceanic ships. Likewise, projects designed to stop the spread of Asian carp in the U.S. and Canada continue to effectively prevent their establishment in the Great Lakes, such as the electric barrier on the Chicago Sanitary and Ship Canal. These initiatives, along with other binational efforts including early detection and rapid response programs, have been crucial in preventing the introduction of new nonindigenous species.

Despite these best efforts, new species are still being introduced to the Great Lakes through various pathways, albeit at a much slower rate in recent years. As of 2019, recently documented invaders included three nonnative zooplankton species (Thermocyclops crassus, Diaphansosoma fluviatile and Mesocyclops pehpeiensis), Mesocyclops pehpeiensis is presumed to have been introduced as a hitchhiker on ornamental aquatic plants from the southern U.S., and while it is unknown how the other two species arrived, they are unlikely to have been introduced via transoceanic ballast given they were all previously reported from the southern United States. 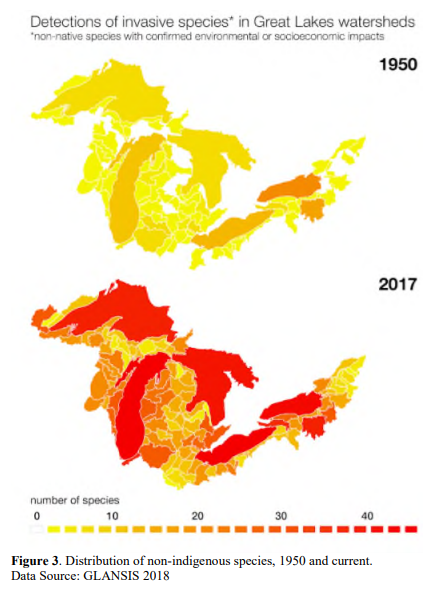 Though the rate of introductions has slowed significantly, the impacts of established invaders persist, where many have negative effects on the ecosystem as well as on human communities. At least 30% of the aquatic non-native species found in the Great Lakes have significant negative environmental or socioeconomic impacts: as the population ranges of some invaders continue to spread within and between the lakes, limiting these negative effects as much as possible is critical to maintaining ecosystem function and health. Crucially, the impacts of these invasive species continue to accumulate as the species each spread from their point of introduction to new watersheds within the basin.

A few particular species have been identified as especially problematic. The sea lamprey, an invasive parasitic fish that preys on native species throughout the Great Lakes basin, continues to hinder critical fish community and ecosystem objectives. Ongoing basin-wide control measures have significantly reduced the negative impacts of the sea lamprey on native fish such as lake trout and sturgeon, but many fish still fall prey to these parasites regularly and management remains crucial.

Zebra and quagga mussels, two other notorious Great Lakes invaders, continue to affect the lakes by altering nutrient cycling, water clarity, and zooplankton and phytoplankton communities. These changes have resulted in an increase in nuisance algae and harmful algal blooms, and may also be connected to the disappearance of the native species Diporeia, an important source of food for fish. In Lakes Michigan, Huron and Ontario, invasive mussel populations in the shallow and mid-depth regions appear to be stable or declining, while populations in the deepest regions of these lakes continue to increase. Invasive mussel densities in Lake Superior remain low, while those in Lake Erie are relatively lower, especially in oxygen-poor regions such as the central basin. 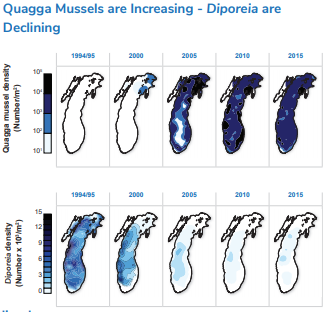 Invasive plant species such as purple loosestrife, phragmites and non-native cattails, were also identified in these reports as negatively impacting water quality, habitat, and biodiversity throughout the region. The substantial environmental and socioeconomic impacts caused by Great Lakes invaders as a whole highlights the continuing need for their effective prevention, management, and control.

To read the complete SOGL 2019 Highlights and Technical Reports, visit binational.net, the hub for Canadian-United States collaboration for Great Lakes water quality. An additional version of the report offers the highlights of the findings.