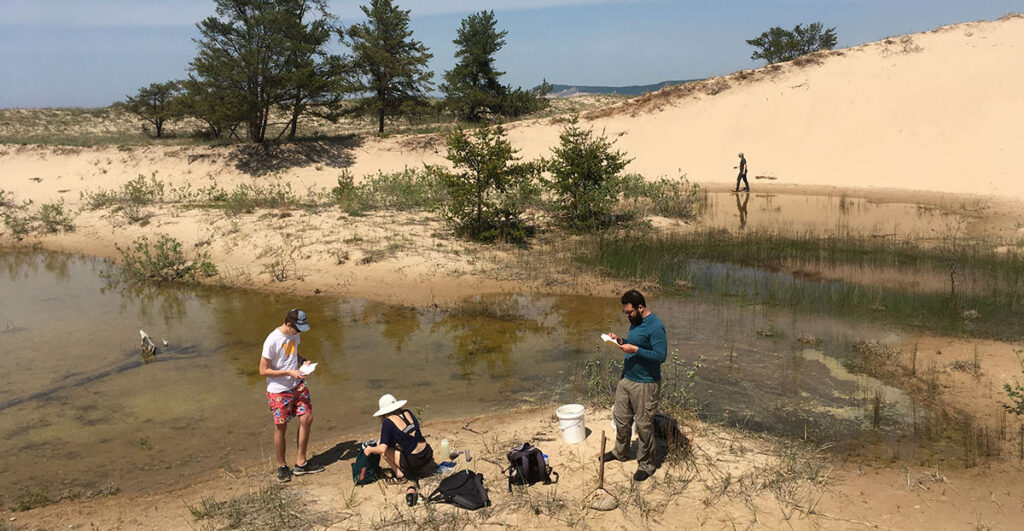 These habitats form in the troughs between dunes where conditions are marked by one constant: change. Water levels can fluctuate widely throughout the year. Wind both deposits and erodes sand continuously, and sunlight reflected by surrounding dunes bakes the wetlands with light and heat. Intrusions from human feet, vehicles, and construction can cause serious damage.

Additionally, interdunal wetlands support some of Michigan’s vulnerable, threatened, and endangered plants, insects, and animals. They serve as important stopovers and foraging grounds for migrating shorebirds, waterfowl, and songbirds. And the wetland communities are diverse and vary geographically. A study in Ludington State Park showed only a 24 percent overlap in species identified in two interdunal wetlands — even though the wetlands were fewer than 750 feet apart.

Until recently, these ecologically significant wetlands on the east coast of Lake Michigan had never been thoroughly inventoried. This would mark an important step toward understanding and safeguarding the delicate ecosystems. 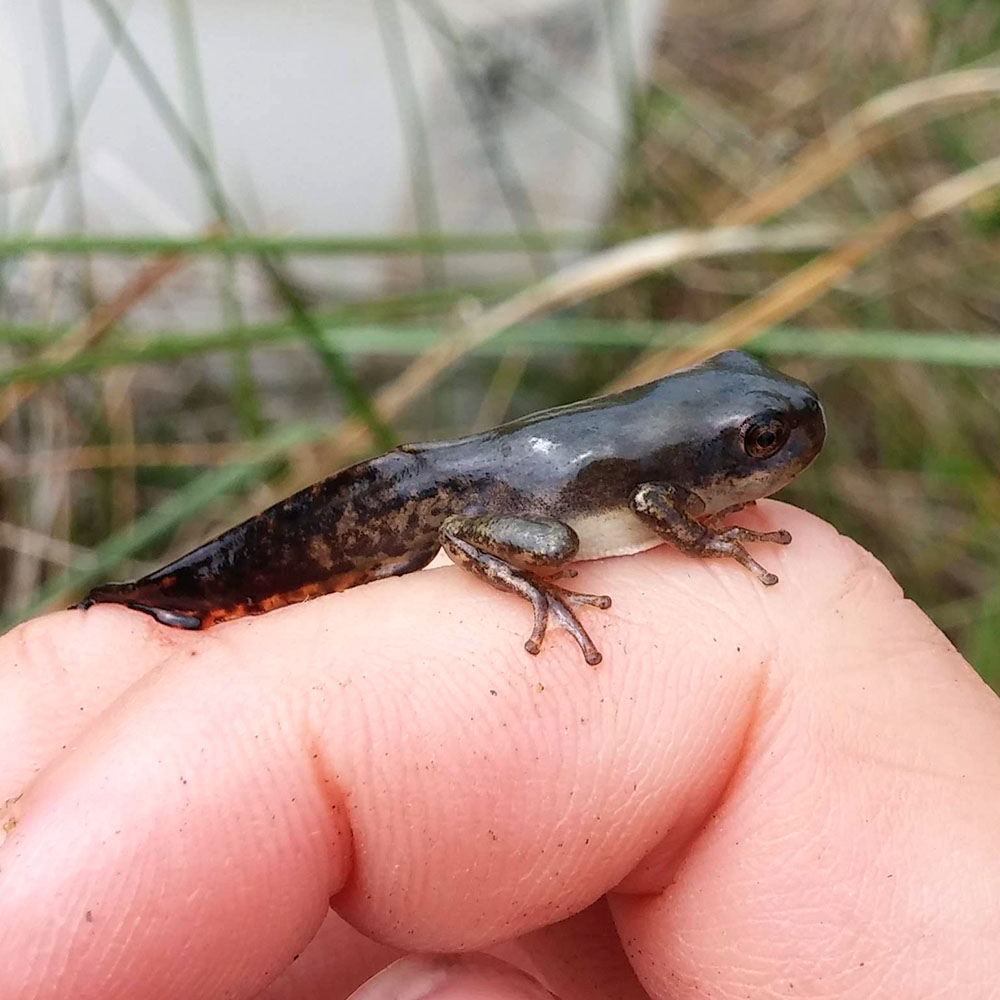 Getting to know the neighbors

In 2016, Michigan Sea Grant funded Tiffany Schriever, an assistant professor of biological sciences at Western Michigan University, to study the distribution patterns of amphibians, reptiles, and aquatic insects in Lake Michigan’s interdunal wetlands. Devin Bloom, an associate professor in the same department, was a co-principal investigator on the project. Schriever, Bloom, and their student research assistants wrapped up reports about their work earlier this year.

Schriever and her students cataloged the creatures living in 38 interdunal wetlands across five lakeshore parks stretching from Indiana Dunes National Park in the south to Sleeping Bear Dunes National Lakeshore in the north. They identified 110 invertebrate species, in addition to seven frogs, two snakes, two lizards, and one turtle.

While working in the parks, Schriever and her team spoke with hikers and beach-goers. “Many had never noticed a ‘pond’ in the dunes before,” says Schriever. “Most people…assumed fish were present in the wetlands — they are not.”

Species richness, a measure of diversity among living communities, tended to be higher in southern regions, in wetlands set farther back from the lake, and in wetlands with forest cover. These patterns may be linked to more stable environmental factors such as temperature and precipitation creating consistent conditions in southern wetlands, and to leaf litter providing more varied food sources in forested areas.

Schriever and her team also used population genetics techniques to analyze many samples of three aquatic insect species collected at each wetland. This allowed them to uncover shifting genetic patterns among individuals of the same species, hinting at the ways creatures move and reproduce among connected and isolated wetlands along the shoreline.

They realized that a relatively stationary mayfly species thought to live throughout the sampling zone was actually two distinct species, with one variety living in the north and the other in the south. They also demonstrated that populations of green darner dragonflies, a species with the strength and stamina to fly across longer distances, tended to be more genetically diverse in northern wetlands. This is possibly due to southern wetlands having more stable conditions, with fewer factors driving the dragonflies to disperse to new habitats.

Next steps for the wetlands

Despite the team’s best efforts, many of Lake Michigan’s interdunal wetlands remain unsurveyed. “You can’t be everywhere all the time and there is a limit to how much you can do,” Schriever notes. “We chose a broad spatial extent with fewer sites [and] sampled repeatedly to gather information on spatial and temporal variation.” 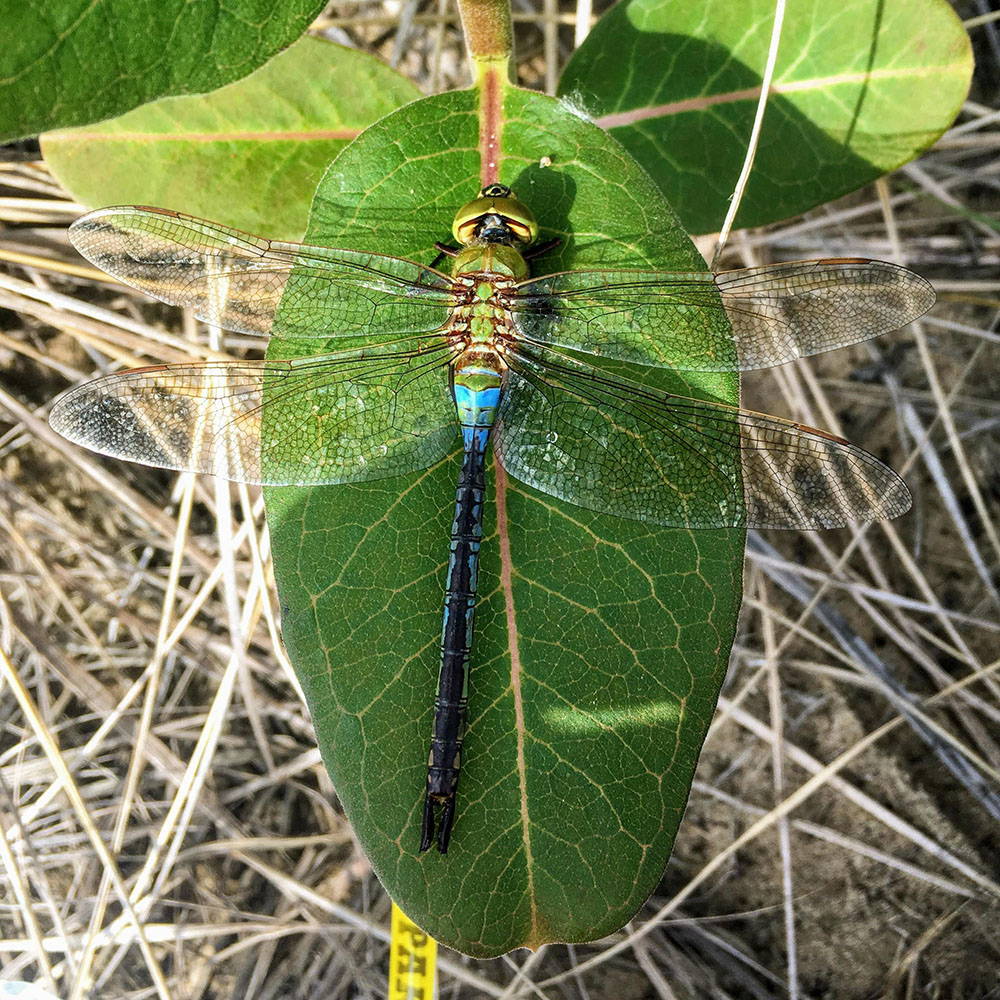 Researchers conducting future inventories will have plenty to explore. “We found that interdunal wetlands, whether near or far from each other, could have drastically different invertebrate species composition,” says Schriever. “I feel sad that we left out so many cool wetlands that need to be inventoried for their unique biota.”

Schriever and Bloom’s research marks an important milestone for Lake Michigan’s interdunal wetlands. The team’s findings underscore the importance of protecting existing wetlands and the natural corridors that allow wildlife to disperse to new habitats if conditions become too harsh in their current home.

“The culmination of this project has advanced the scientific discovery of a rare habitat,” writes Schriever. She hopes that people managing shoreline regions with interdunal wetlands might use her findings to help guide management decisions and draw visitors. “We all learned so much about the Great Lakes freshwater dune system, the importance of discovery, the resilience of nature and our human spirit during this project. I have fallen in love with Lake Michigan’s coastal wetlands.”

The project also provided unique opportunities for Schriever’s student research assistants. “I could not have accomplished this work without the awesome, hard-working, intelligent, curious, and fun graduate and undergraduate students that worked on this project with me,” says Schriever. “I would hire them all again in a heartbeat.”

Four students wrote their theses based, at least in part, on their work with interdunal wetlands. One undergraduate student painted a toad bug she encountered at Warren Dunes State Park, and her art was selected for the 2019 student showcase at Western Michigan University’s Richmond Center for Visual Arts.

For visitors exploring Michigan’s dunes, remember that interdunal wetlands and other dune ecosystems are delicate and easily damaged by humans and vehicles. Be sure to stay on marked trails, keep dogs on leashes, and observe the wetlands from a safe distance. Check trailheads and park information stations for more details about these incredible habitats!