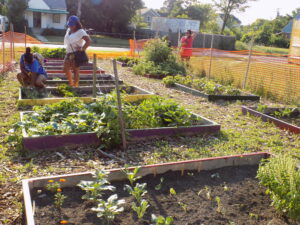 Neighborhood Building Urban Gardens (BUG) is a nonprofit that uses urban gardening to help bring fresh, healthy produce — along with leadership opportunities and skills training — to Detroit residents. Neighborhood BUG was founded in 2014 by Orlando Thorpe and Jessica Patton, both native Detroiters passionate about food security and community health and development. Learn more about the founders.

Neighborhood BUG operates an urban garden in a residential neighborhood on Detroit’s west side. The garden is maintained by volunteers and, before COVID-19 restrictions came into effect, was a community gathering spot for neighbors.

When the pandemic hit, Neighborhood BUG volunteers and crew members couldn’t safely maintain the garden, and the plots fell into disarray. 2021 provided important opportunities for Neighborhood BUG to reset the property and make plans for the future, with help from some enthusiastic interns.

A season of renewal

Mary Bohling, Michigan Sea Grant’s Extension educator in southeast Michigan, coordinated the internship support. “Workforce development is important to Michigan Sea Grant,” says Mary. “We’re happy to partner with The Youth Connection and Neighborhood BUG to give interns the opportunity to expand their job skills as they learn about urban agriculture.”

Intern Sydney Embry is a junior studying international business at Howard University. She grew up in west Detroit and notes that her neighborhood could be categorized as a “food desert,” where residents have little to no access to affordable, fresh foods. Neighborhood BUG is close to her heart, since she has been helping with the garden since the first plots were dug in 2014.

“Even though I am a business major, I have other passions,” says Sydney. “Being involved in Neighborhood BUG has introduced me to the agricultural community, even in urban places. This directly relates to my passion for sustainability and solving problems of food insecurity.”

Sydney hopes to use her business degree to eventually start a nonprofit aimed at tackling these challenges. Meanwhile, her summer internship has helped her make deeper connections with like-minded people and save money for school.

She celebrates that the garden’s purpose is to give back to the community. Before the pandemic halted their momentum, the bustling garden gave youth a place to hang out and a way to stay busy in the summertime. Neighbors stopped by to chat or help harvest, and the garden workers and volunteers held barbecues around the vegetable plots. They sold their produce at Detroit’s Eastern Market and fed the profits back into the city’s urban garden network. Sydney calls it “the garden that literally keeps on giving.” 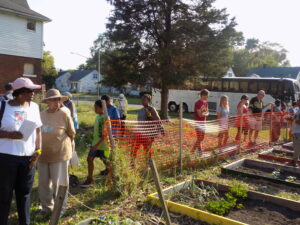 The garden bustled with volunteers and visitors in pre-pandemic days. Photo: Neighborhood BUG

She reminisces about a cooking party that Jessica Patton once held in her home to help volunteers and workers celebrate their harvest. A local chef donated her time and recipes to help the group whip up batches of jalapeno poppers and fresh basil pesto.

In 2020, COVID-19 restrictions kept Sydney and the other volunteers from safely tending to the garden. This year, Sydney and her fellow intern Nia Hanserd have helped repair and restore Neighborhood BUG to once again be the resource their community needs.

Nia also grew up on Detroit’s west side and is now studying nursing at Henry Ford College. “I wanted to be able to help people, even if I’m not in the nursing profession quite yet. I really just wanted to help and try to restore the garden,” says Nia.

Since this is her first year with Neighborhood BUG, Nia hasn’t seen the garden in its heyday. But she’s working hard to help it heal. “Trying to restore the garden has helped me learn how to garden,” she reflects. “It’s really helped me understand how I might plant my own garden someday.”

Nia and Sydney, along with two younger crew members named Alexis and James, spent the summer cutting grass, pulling weeds, laying out new walking paths, and removing old boards originally used to construct the veggie plots nearly a decade ago. They planted some cabbage, basil, tomatoes, cilantro, and peppers. Nia wasn’t particularly fond of the spicier peppers, but she enjoyed her first taste of cilantro. 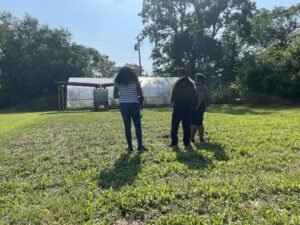 Founder Jessica Patton and the garden crew are making plans while Neighborhood BUG gets back up to speed. They hope to add sunflowers or other plants as natural barriers to keep rabbits and other unwanted guests out of the vegetable beds. Eventually, they would like to continue hosting potlucks and cooking parties, attending urban garden festivals, and chatting with neighbors over the harvest.

Meanwhile, they’re collecting seeds and scoping out what to plant in the fall. They’re refreshing the raised beds with pallet wood and other reclaimed lumber, and they’re tamping down weeds and grass using cardboard boxes collected from homes and grocery stores.

Even in this maintenance year, Nia and Sydney enjoyed their internships with Neighborhood BUG. “My favorite part has been learning how to garden and how to build a garden back from the ground up,” says Nia. “It’s been a great learning experience.” Sydney has appreciated connecting with the teen workers and spending the summer helping restore the garden she has valued since she was 13.

While no one knows what conditions 2022 may bring, Neighborhood BUG is poised to grow healthy, fresh food and serve its community once again. 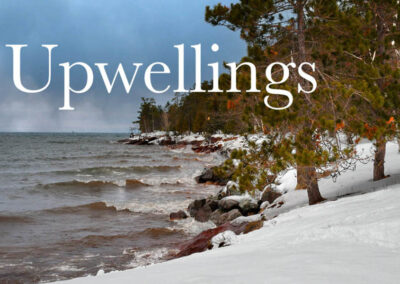