Don’t get swept away this winter while sightseeing near the Great Lakes. 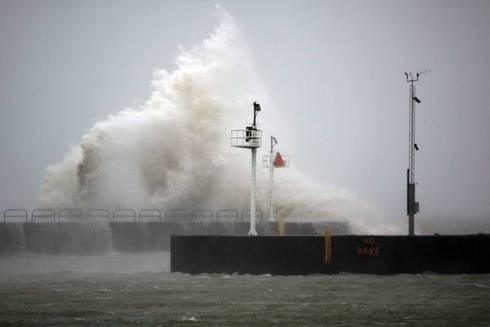 Winter is a spectacular time to visit Great Lakes shorelines. Intense storms lead to massive waves crashing over breakwaters and lighthouses with stunning dark skies as backdrops. While these waves and weather make for interesting viewing, they can also be life threatening.

Drownings occur in the Great Lakes every year. According to the Great Lakes Surf and Rescue Project, at least 99 people drowned in the Great Lakes in 2016. Many of these deaths happen when people swimming end up in dangerous currents such as rip or structural-caused currents. Other drownings happen because of boating or kayaking accidents. And several deaths each year occur when people are blown or washed off breakwaters, docks, cliffs and other similar nearshore structures.

The months of October, November and December are when extremely windy days will kick up massive waves across all five of the Great Lakes. On Oct. 24, 2017, one such storm swept across the northern Great Lakes. Buoys run by the Great Lakes Observation System (GLOS), a critical Great Lakes information-collecting network, recorded record wave height on Lake Superior with waves reaching an incredible 28.8 feet in height. With the waves came many sightseers eager to witness the display of force by the lake. Unfortunately, two people observing from a popular cliff-like rock formation near Marquette were swept into the lake and lost their lives.

Lake Superior isn’t the only lake where high winds and crashing waves have resulted in the loss of life. Fishermen on Lake Michigan standing on local breakwaters have been swept away or fallen into the water under high wind and icy conditions. Some folks walking or jogging along shorelines near Chicago have also fallen into the lake when large waves washed over them. The mix of high waves, strong winds, and often icy conditions can make piers, nearshore cliffs and breakwalls all dangerous structures.

Preventing these drownings in the Great Lakes can be as easy as checking the weather report. Any month of the year there is the potential for high waves in the Great Lakes. If you are headed to a Great Lakes shoreline to walk out on a breakwater, climb some nearshore rocks, or jog along a lakeshore path, it’s important to know what the predicted wave and wind patterns will be for the day. If the waves and winds will be high, then stay away from these types of areas. Be aware that icy buildups can increase your risk of falling in even on relatively calm days. It’s better to watch waves and the water from a safe distance, than to risk losing it all.