You may have heard about rip currents, rip tides, or undertows. These are terms that people commonly use to describe dangerous currents. However, since there are no tides in the Great Lakes (needed to form a rip tide) and currents don’t pull a person down under the water (undertow), they are a bit inaccurate. Instead, we call these dangerous currents. Also, most people know that ocean currents can be dangerous, but don’t suspect that there are such strong currents in the Great Lakes.

The Science of Currents

Currents in the Great Lakes can form from any combination of wind, waves, bottom formation, beach slope, water temperature, man-made structures, and natural outlets. For example, during rip currents, the water “piles up” between a sandbar and the beach. It has to find a way back out to sea.

After the pressure builds up, the water creates a pathway and gushes from the shore back out to open water. That’s a rip current: a narrow but powerful stream of water and sand moving (ripping) swiftly away from shore. Rip currents vary in size and speed and can be found on many beaches every day.

Other currents can be more variable, dependent upon the bathymetry (shape of the lake bottom) and the wind and wave conditions. The location and strength of variable currents is difficult to predict, but check the National Weather Service’s Great Lakes Beach Hazard page for up-to-date warnings during the swimming season. 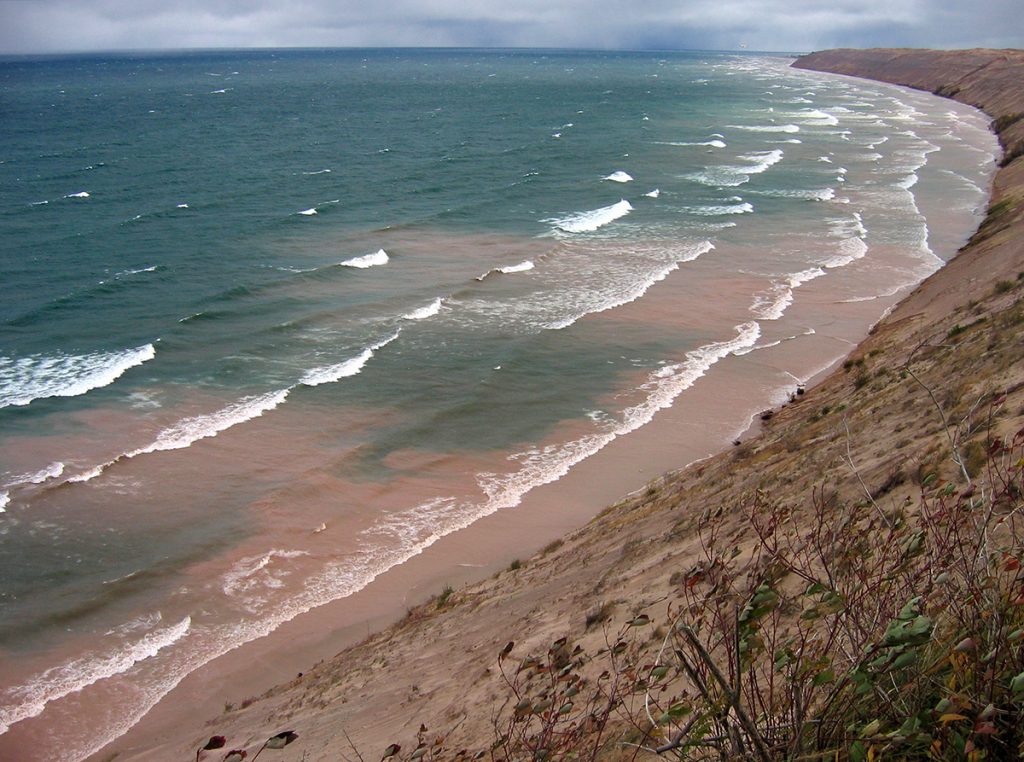 Dangerous current-related incidents in the Great Lakes most often occur when:
People may feel comfortable swimming in seemingly moderate wind and wave conditions, but it’s important to keep in mind that when there are onshore winds and breaking waves dangerous currents may be present.
Source: National Weather Service Great Lakes Current Incident Database

Dangerous Currents at a Glance

In the Great Lakes, swimmers are most likely to encounter one of five common currents: rip, outlet (river channel), longshore, channel, and structural. 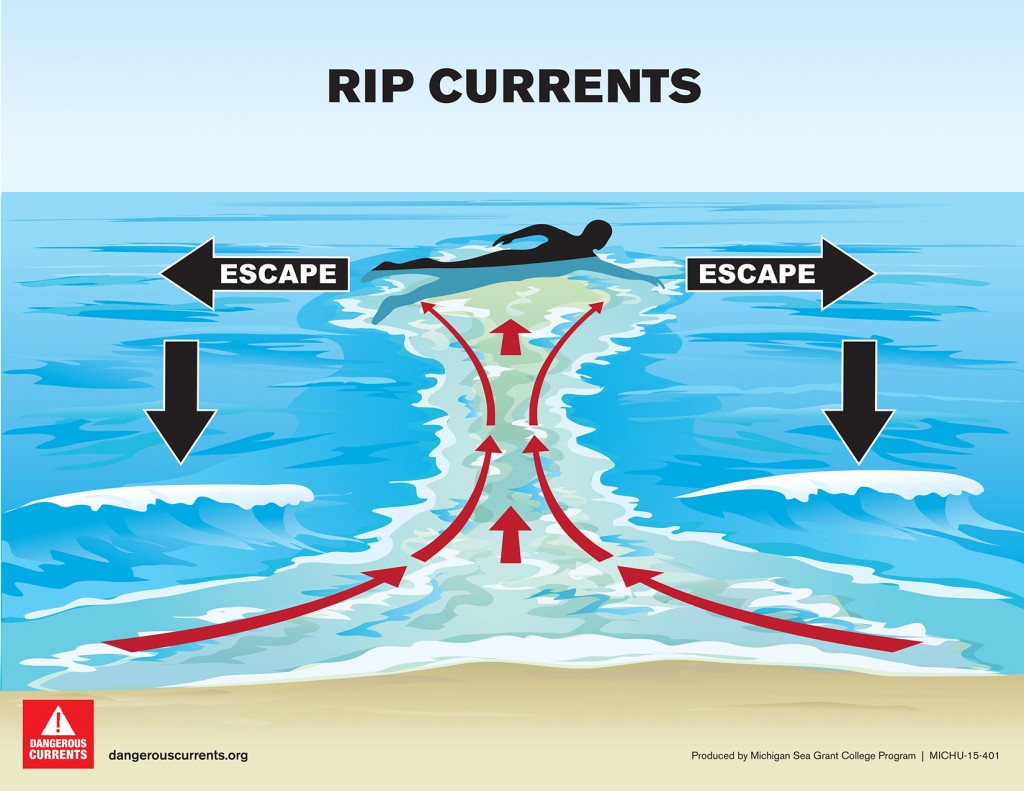 Rip currents form when waves break over a sandbar near the shoreline and the water and its momentum get trapped between sandbar and shore. When the water and the momentum build up, the water has to go somewhere. One of the ways the pressure is relieved is when water returns to the lake in the form of a rip current, a narrow but powerful stream of water and sand moving (ripping) swiftly away from shore. Rip currents that vary in size and speed can be found on many beaches every day.

Rip currents will not pull a swimmer under the water. Instead, it will carry them out to the open water, away from shore. 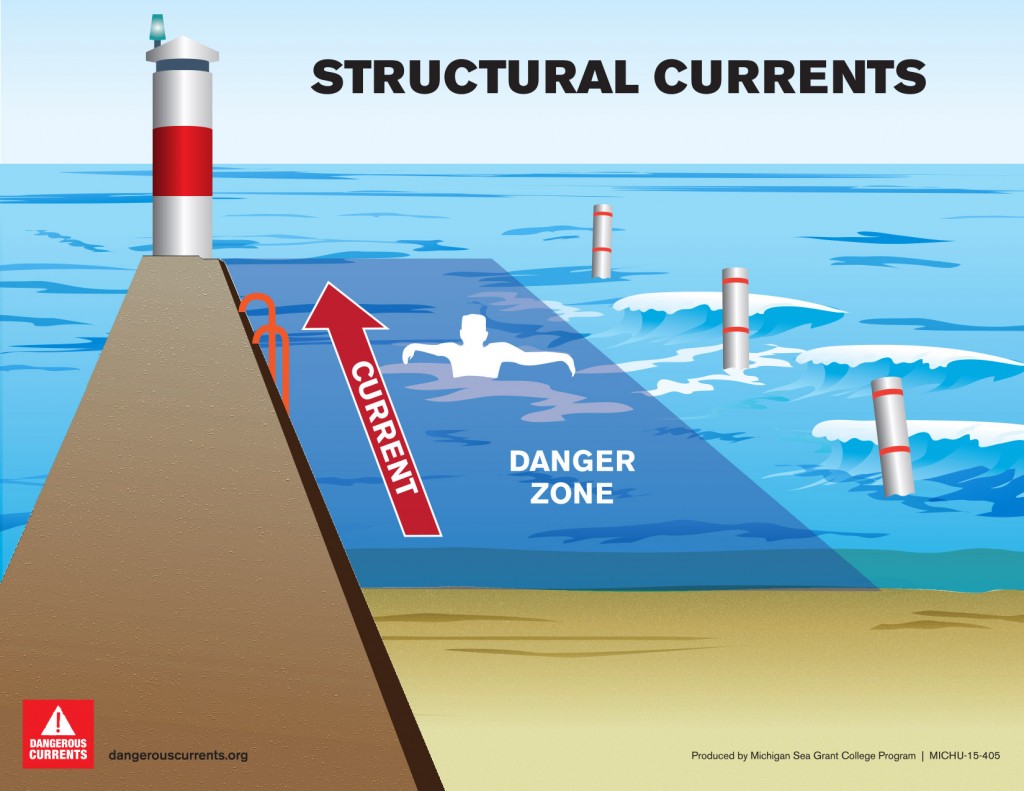 While it can be difficult to predict when and where most currents will occur, the opposite is true for structural currents. The currents found alongside or as a result of structures like piers and breakwalls — called structural currents — are usually always present. Structural currents are dangerous on their own, but when paired with others like longshore or rip currents, the combination can create a washing machine effect, moving the swimmer from one dangerous current area to another with no clear path to safety.

Avoid jumping off or swimming near piers. The currents found along these structures are often dangerously strong. 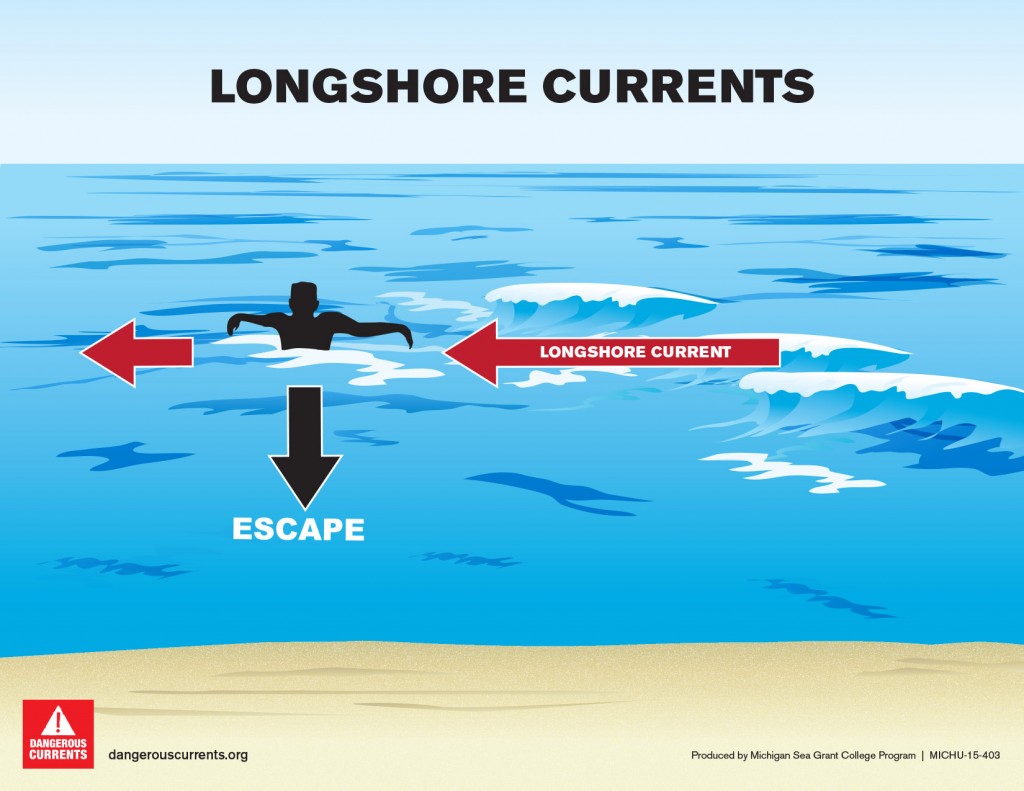 As the name suggestions, longshore currents move parallel to or the “long” way along the shoreline. These currents will exert a force to move along shore, making it difficult to remain in front of a spot on the beach. They often happen between the first and second sandbars near the shore. Longshore currents become more dangerous when they combine with rip currents or structural currents since they can move a swimmer swiftly down a beach and into the path of another current or into a structure (pier or breakwall), making it more difficult to swim to shore.

Be aware of longshore currents that may carry you toward structures. Stay at least 100 feet away from any structure. 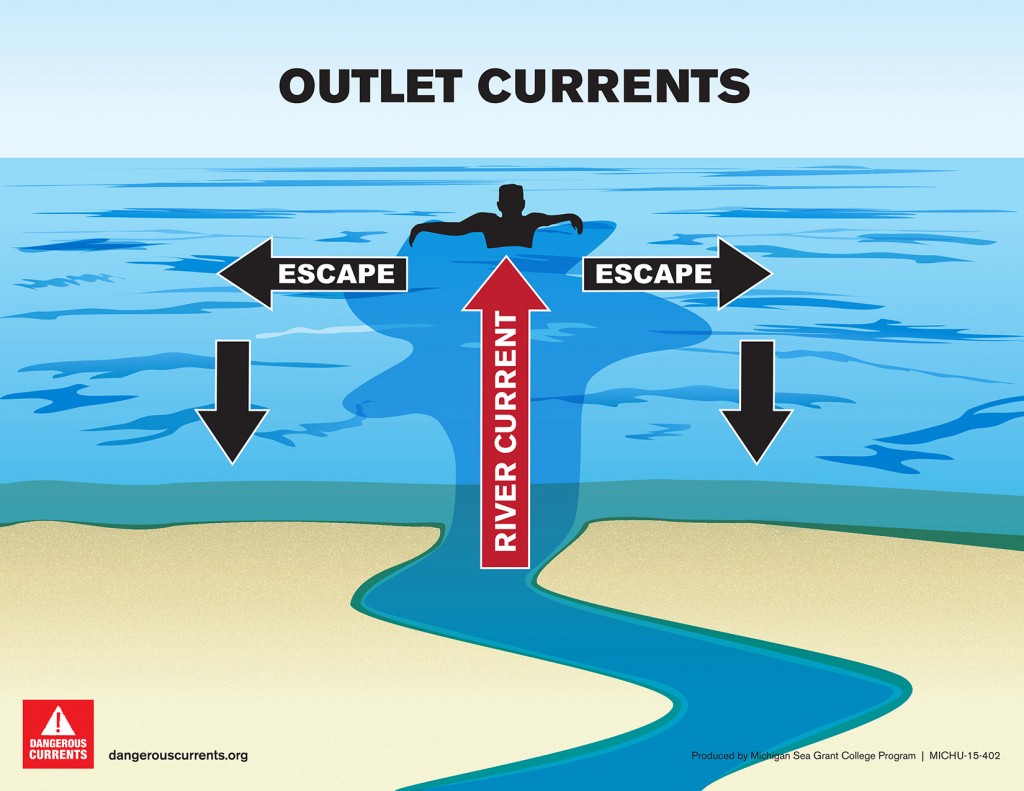 Outlet currents can be found where rivers and streams empty into the Great Lakes. The flow of water from the river or stream can move quickly. As it enters the open water of a lake, it may take awhile for that current to dissipate. Pair that with currents that are present in the lake and the situation can become dangerous.

While they are tempting to swim in because they are often warmer than the lake water, avoid swimming in or near outlets. 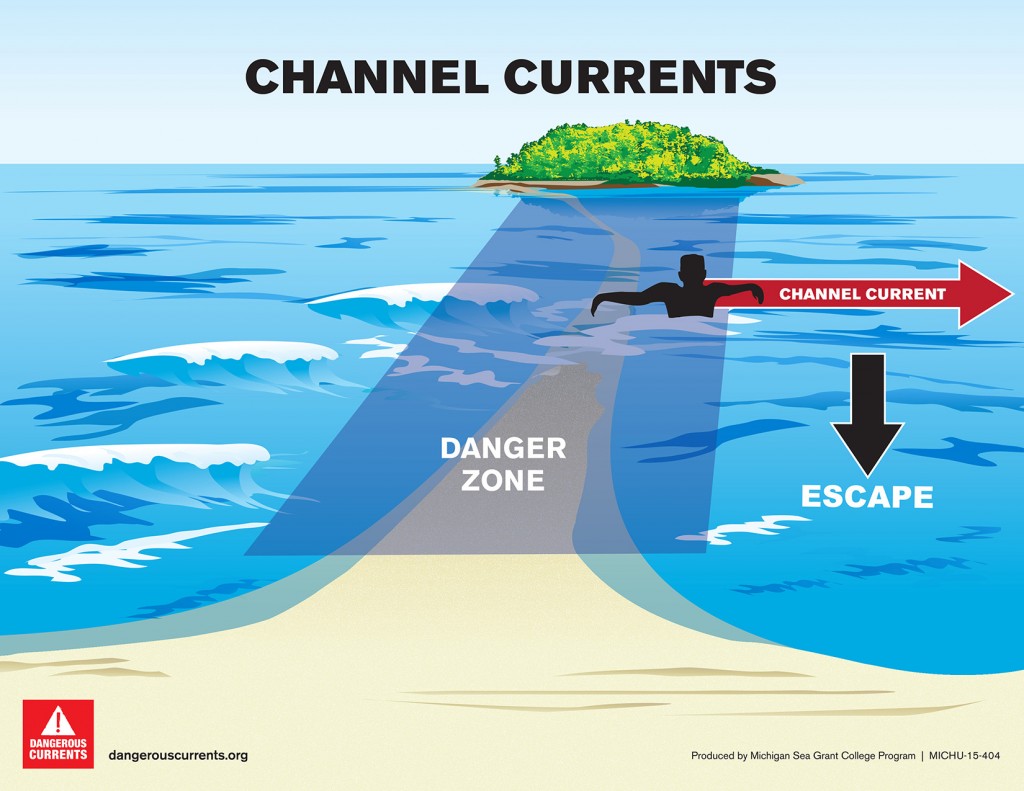 A channel current is like a river running parallel to shore. With a channel current, typically there is an island or structure such as a large group of rocks not far from shore. A channel current forms when the flow of water speeds up as it goes between the island and shore, like a bottleneck. This is made worse by the presence of a submerged or partially submerged sandbar connecting the beach to the island, which allows pressure to build behind the water and waves until it breaks through. When the wind speed increases, the waves also increase in intensity, and this causes the current to become stronger and faster.

The best escape route is to swim to the shore, not the sandbar.

The GLWSC is a community of best practice that aims to help people safely enjoy the Great Lakes, with a long-term vision of ending drowning. The community brings together water enthusiasts, first responders, community leaders, park rangers, research scientists, lifeguards, meteorologists, drowning survivors, parents and loved ones of drowning victims, and other water safety advocates.

The Great Lakes Current Incident Database contains information about dangerous currents and current-related drownings or rescues, going back to 2002.

A limited supply of beach safety signs is available free of charge from the Michigan Coastal Management Program. These signs are for use at Great Lakes public beaches in Michigan and may be requested by community beach managers.