You may have heard about the rip tide or undertow before. These are terms that people commonly use to describe dangerous currents. However, since there are no tides in the Great Lakes (needed to form a rip tide) and currents don’t pull a person down under the water (undertow), they are a bit inaccurate. Instead, we call these dangerous currents. Also, most people know that ocean currents can be dangerous, but don’t suspect that there are such strong currents in the Great Lakes.

This lesson explores dangerous currents, including rip currents, that commonly occur throughout the Great Lakes.

What is a Dangerous Current? 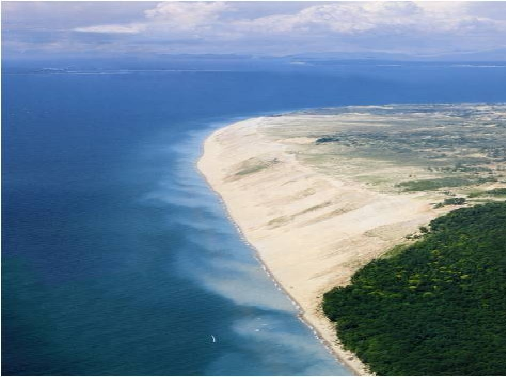 Rip currents, structural currents and other currents that are strong enough to pull an Olympic swimmer off course are considered dangerous.

Have you ever been swimming in one of the Great Lakes and suddenly realized that your towel and shoes were way up the beach? It’s likely that the gentle pull of a current gradually influenced you to move while swimming. Many currents are like this — nothing to worry about. However, currents that are stronger, and therefore more dangerous, are fairly common in the Great Lakes. As currents strengthen, they can turn from inconvenient to dangerous and even deadly. A current is technically considered “dangerous” when it reaches 2 mph or faster, however, there are some currents like those found near structures that can be dangerous at slower speeds.

Dangerous Currents at a Glance: 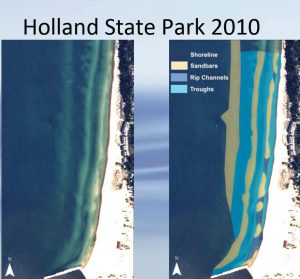 This aerial shot shows where rip currents are most likely to occur — in the swimming zones along shore. Water can pile up between the shore and the sandbars until it needs to create a means of escape, causing a rip current from the shore out to the open water. The right image shows an overlay of the different areas within the swim zone.

The Science of Currents

Currents can form from any combination of wind, waves, bottom formation, beach slope, water temperature, man-made structures and natural outlets. For example, rip currents, one of the more common and dangerous currents swimmers encounter, the water “piles up” between a sandbar not far from shore and the beach. It has to find a way back out to sea. As the pressure builds up, the water creates a pathway — essentially a river of water running from the shore out to open water. That’s what a rip current is, a narrow but powerful stream of water and sand moving (ripping) swiftly away from shore. Rip currents that vary in size and speed can be found on many beaches every day.

In the Great Lakes, there are permanent currents and variable currents. Permanent currents are always found in certain locations — and only vary in strength. For example, strong currents are always present along piers and breakwalls, and can be found where rivers and streams empty into the lake. Other currents can be more variable, dependent upon the bathymetry (shape of the lake bottom) and the weather and wave conditions. The location and strength of variable currents is much more difficult to predict.

Guy Meadows, director of the Great Lakes Research Center at Michigan Technological University, has been researching dangerous currents and weather conditions for many years. Meadows has developed several ways of gathering data to help predict when and where rip currents and other dangerous currents may form. He uses a combination of GPS, radar and satellite to gather the data before, during and after weather events (such as storms) that may contribute to the formation of currents.

One experiment at Grand Haven State Park in May of 2013 moved the research team closer to understanding current formation. The team was able to catch a current using instruments dropped in the water. Within a few minutes, that current was gone and another current had sparked up about 100 feet down the beach.

The experiment demonstrated that currents can be found in known locations, can appear very quickly and can also migrate quickly to other locations — making awareness and forecasting all the more important.

When examining past current-related incidents, there are several factors that may play a part, including the following:

Potential Discussion: As a class, talk about the power of water. When water is backed up and pressure builds, what can happen? Think about a damn bursting, or an aboveground pool that has sprung a leak — rivers that have carved out deep walls and worn down rock over time. Have you ever experienced a current in the Great Lakes or the ocean?

In the Great Lakes, swimmers are most likely to encounter one of five common currents: structural; rip; channel; longshore; and outlet (river channel).

Review the different types of currents:

Who is Most at Risk?

The lesson Dangerous Currents: Don’t Get Swept Away explores who is at risk, how to spot currents and more.