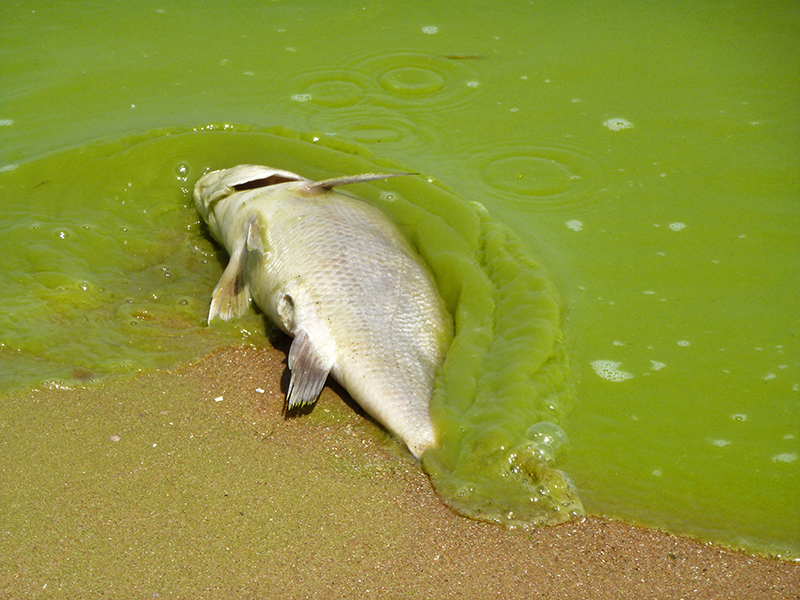 Some eutrophic lakes (and coastal regions of the ocean) may develop what is referred to as dead zones in the summer. Dead Zones are areas without enough dissolved oxygen to support fish or zooplankton. Lake Erie is especially prone to developing dead zones. This lesson explores what contributes to dead zones, how it can affect the life in a lake and where and how to spot one using data clues.

Less oxygen dissolved in the water is often referred to as a “dead zone” because most aquatic life either dies, or if they are mobile like fish, they can leave the area. Dead zones typically occur in eutrophic lakes and parts of the ocean – meaning the parts that are quite productive and normally support a good amount of life. A dead zone can occur when there is actually too much life, which can deplete the levels of dissolved oxygen found throughout the water column.

Dead zones occur in many areas throughout North America, particularly along the East Coast, the Gulf of Mexico and the Great Lakes.

Dead zones can occur naturally, but they can also be created or enhanced by human activity. There are many factors that combine to create dead zones, but excess nutrients entering the water is a primary cause of dead zones in the Great Lakes. These are considered human-influenced and can be linked particularly to excess nutrients that run off land or wastewater that can overflow into rivers and lakes.

The nutrients from these sources can stimulate algae growth, more than the lake would naturally support, which then sinks and decomposes in the water. The decomposition process consumes oxygen and there is none to replace it because of the temperature and water density gradient during the summer. The dissolved oxygen supply available for aquatic life is depleted until the lake “turns over” or the stratified layers of water mix.

Invasive species like zebra and quagga mussels are also thought to contribute to the development of dead zones, specifically in Lake Erie. The mussels filter out nutrients and green algae early in the year and release fecal pellets (excess nutrients) late into the summer. They also reject the blue green algae, which contributes to harmful algal blooms (which in turn can contribute to dead zones).

See Properties of Water and Oxygen in Water for more information on how the physical properties of water contribute to dead zones. 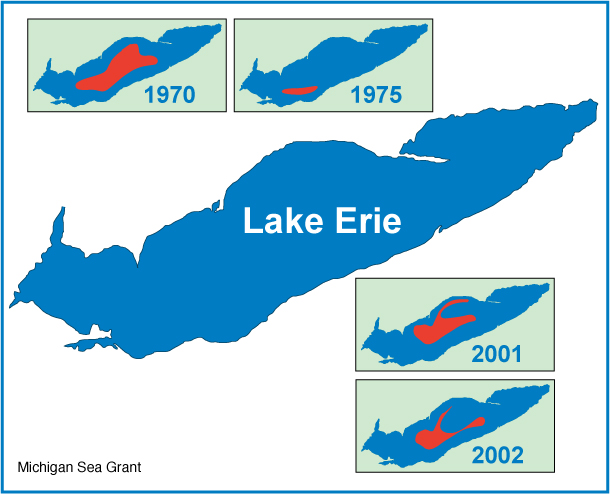 Articles and Other Resources