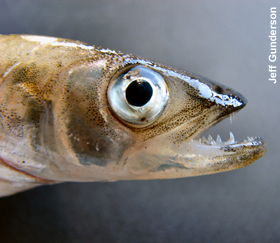 Each spring in the tributaries of Lake Superior, sportsmen gather to fish for smelt. How do they know where and when to find the smelt? How do they scoop them up? Bring your dip-net, bucket and waders and look at environmental patterns for clues. The U.S. Geological Survey (USGS) provides water data that can help you plan a successful dip-netting outing like those along Lake Superior. And don’t forget to bite the head off the first smelt you catch — to ensure good luck during the run.

Smelt were brought into the Great Lakes in the early 1900s to help stocked Atlantic salmon survive. Smelt were initially stocked in Crystal Lake, in northwest Michigan, and a population soon spread to Lake Michigan and other Great Lakes. They were first found in Lake Superior in 1930.

The smelt move from lakes into tributaries in early spring to spawn. Spawning is related to spring thaw and often begins after consistent warming rain showers when water temperatures reach 5-7 degrees Celsius (C) or 42-44 degrees Fahrenheit (F). Spawning runs last about three weeks, or as long as temperatures stay in the preferred range. Photoperiod — or the changing length of the day — is an additional environmental cue for spawning.

Factors influencing populations: 80 percent of variation in population size is related to spring rainfall and abundance of other prey species like smelt. Prey species are fish that are generally considered prey for larger fish.

Spawning: Smelt spawn in tributaries over gravel beds at night and return to the lake by morning. Spawning is related to spring thaw, water temperature and warming spring rains and usually lasts about three weeks. (Note: Photoperiod is an additional environmental cue, but in this activity, students will use only water temperature and water discharge as indicators.)

Fishing strategy: The best dip-net fishing is in tributaries at night between 10 p.m. – 2 a.m. during the spawning run.

What you’ll need: Dip-net and bucket, warm clothes, waders, life jacket, flashlight and Michigan fishing license if you are 17 or older.

Where to get more information: Department of Natural Resources Fishing Report Hot Line (517) 373-0908. Or if you feel confident after the activity, test your science detective skills.