Have you ever heard of a Great Lakes tsunami? While the terminology tsunami does not technically apply in the Great Lakes (it is an ocean phenomenon), a large, rogue wave or set of waves crashing along our freshwater shores are not unheard of. In 2013, just such a wave occurred along one Lake Erie beach, sweeping several people up and taking them out to sea. Was it a tsunami? A tidal wave? No, it was most likely a seiche.

Storms can profoundly affect the Great Lakes, sloshing water from one end of a lake’s basin to other, sometimes in a matter of hours, like displaced water in a bathtub. This lesson focuses on storm surges and seiches — Great Lakes water movements that can change lake levels dramatically during storms. Surges and seiches can arise suddenly and unexpectedly. While most are not dangerous, some have been deadly and are known to sweep people off piers and beaches, damage shorelines, sink ships, leave ships high and dry and cause flooding.

When Lake Michigan suddenly rose 10 feet and 150 feet past the normal water line on the beach on July 2, 1956, the rising water swept anglers off the pier and sent sunbathers running for safety as swimmers struggled against fierce currents. After the first surge of water, the lake receded 15 feet below the normal water line and then rolled back in a big wave. The seemingly haphazard temporary rise and fall of the lake’s water level could be explained: the people of Ludington had just come face-to-face with a Great Lakes seiche.

You may be familiar with waves, but they are not the only type of water movement. On the Great Lakes there are special types of water movements, called storm surges and seiches, that happen when a storm (low pressure center) moves across the lake. If a lake is oriented in the same direction as the path of storms, it is more likely to be affected by storm surges. That is because the winds can blow across the water for a greater distance or fetch.

Most storms in the Great Lakes region move from west to east. 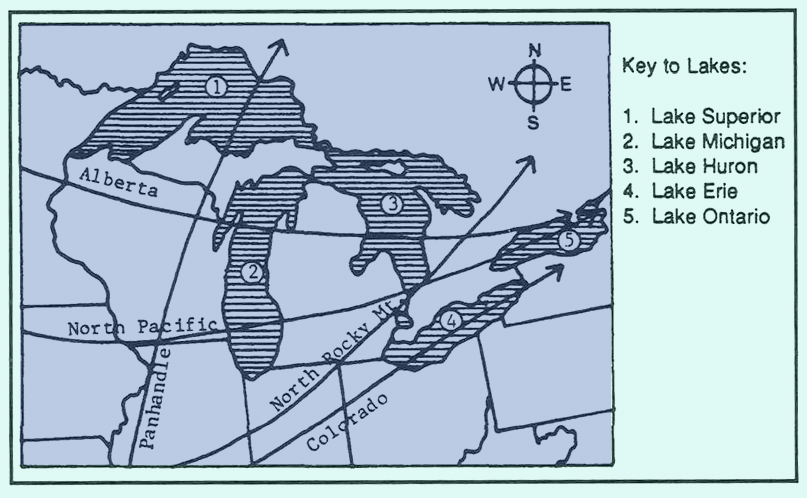 When a storm first moves over one of the lakes, typically the temperature drops and the wind changes direction. This disturbs the water in the lake and causes it to move in the same direction the storm is moving. For example, when a storm moves from west to east, water is moved from the western side to the eastern end of the lake. The water level in the eastern end of the lake is raised. This is called a storm surge. A surge can cause a difference in water level of several feet between both ends of the lake. 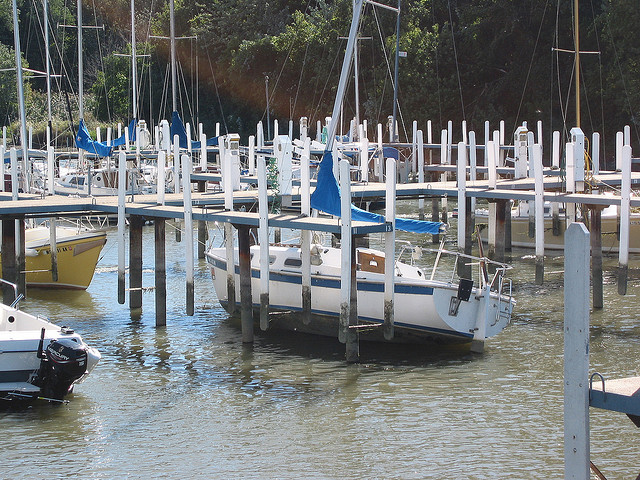 Storm surges may cause seiches. The word seiche is French for “to sway back and forth.” After a storm moves past the lake, and the wind and pressure are no longer pushing the water, the piled up water moves toward the opposite end of the lake. The water sloshes from one end of the lake to the other a few times until the water level is returned to normal. This sloshing back and forth is called a seiche. Often a seiche can be spotted because the water level will be high along the shore and within a relatively short period of time, the water level will then drop, sometimes leaving bottomlands exposed. Seiches may “slosh” back and forth like this several times before reaching equilibrium. 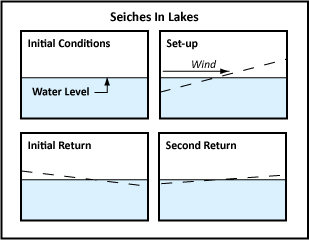 Small-scale seiches and surges may not be noticed, but those that have significant water movement can:

In addition to causing damage to shorelines and structures, storm surges and resulting seiches may impact biology of lakes by pulling nutrients from sediments into the nepheloid layer (the nepheloid layer is a turbid, nutrient-loaded, particle-rich zone above the lake floor).

Factors influencing storm surges and seiches in the Great Lakes include:

Lake Erie water levels are deep at Buffalo, which is at the eastern end of the lake. The shoreline rises quickly to high ground. This limits problems caused by storm surges at the eastern end of the lake. However, boats and docks that are tied up can become damaged when the water level rapidly rises and falls, causing the boats to move around and bang against the docks. 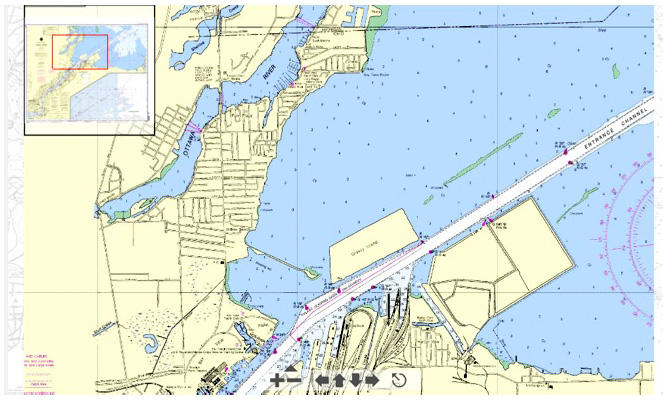 Lake Erie near Toledo, Ohio is quite different than Lake Erie near Buffalo. The water is shallow and the land surrounding the western end of the lake is flat and lies at about the same elevation as the lake surface. During a storm, water in Lake Erie can move toward Buffalo in a large surge. When this water displacement happens, a large area of Maumee Bay, near Toledo, can actually dry up. Recreational boats docked in Maumee Bay have been known to sit on the lake bottom when this happens.

Commercial boating is disrupted and the water supply for some towns is cut off as well. When the water comes rushing back into Maumee Bay, boats and docks may be damaged. The rushing water may push boats underneath docks. In addition, when a water surge is pushed toward Toledo, the western end of Lake Erie water will spill out of the lake, flooding the land. Such floods have caused a lot of damage to property around Toledo.