Dangerous Currents: Don’t Get Swept Away 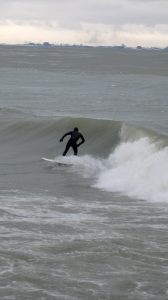 It was the day after Christmas 2010. Dave Benjamin, a Great Lakes surfer, was winter surfing on Lake Michigan with some friends when he got into trouble. The leash to his surfboard failed, and he was out in the water, getting hit by wave after wave and was caught in a current. Water had breached his wetsuit. He was losing energy.

“I have been swimming in Lake Michigan all of my life,” said Benjamin. “All of that experience went out the window when panic set in. I came to a point where I was writing myself off. I came to the resolution that I’m not going home today.”

This lesson explores dangerous currents, including rip currents that commonly occur throughout the Great Lakes.

For alignment, see: Don’t Get Swept Away NGSS Summary 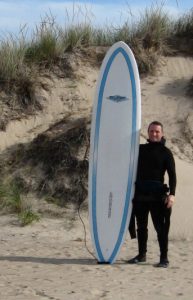 Dave Benjamin with his surf board.

While Dave Benjamin’s story may not resonate at first — he was surfing in December, after all — it has all of the elements of a warmer-weather drowning, including exhaustion and panic after getting caught up in a current. Something he learned before he got in the water saved his life.

These are conservative numbers — it is likely that currents contribute to many more deaths and rescues in the Great Lakes than are reported. Many of the deaths happened near structures, like piers and breakwalls, making these areas the most hazardous places.

Dave Benjamin was near a breakwall when he got into trouble in Lake Michigan. He was losing energy.

“I was very close to the break wall, but I knew immediately that I couldn’t use it as an escape because it was jagged rocks covered in ice,” he said. “The waves were smashing my board into the wall and I feared that I would be next to get smashed into the wall.” 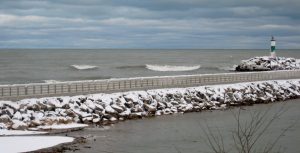 A breakwall in the Great Lakes.

He was reviewing his life, he said, when an article about drowning came back to him. It was then he did what saved his life: essentially nothing. He stopped struggling against the current, flipped over and began to float on his back, which gave him time to catch his breath and think. He was eventually able to make it back to shore, taking turns resting and swimming. He flipped, floated and followed his way to safety.

To learn more about the science behind dangerous currents, see: Dangerous Currents 101 Lesson

When examining past current-related incidents, there are several factors that may play a part, including the following: 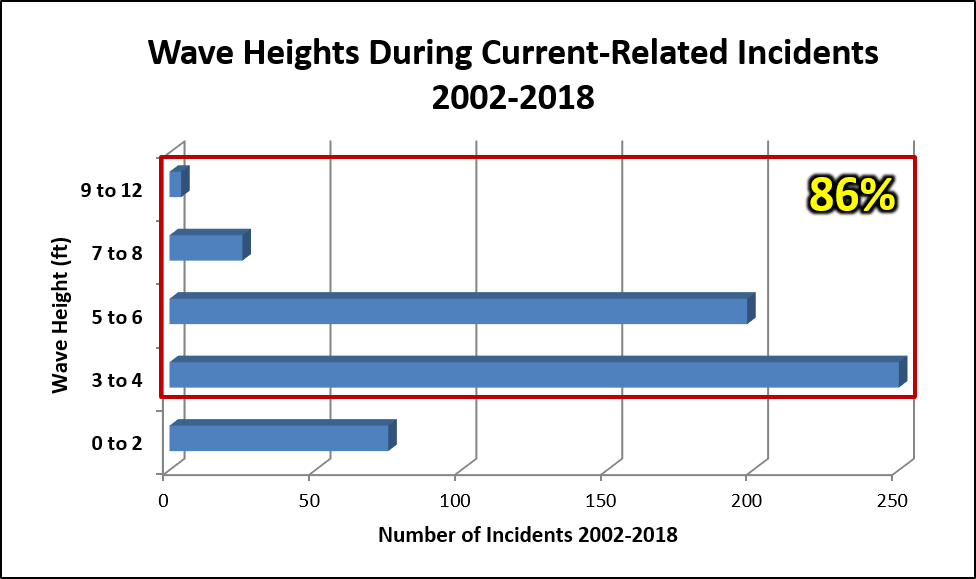 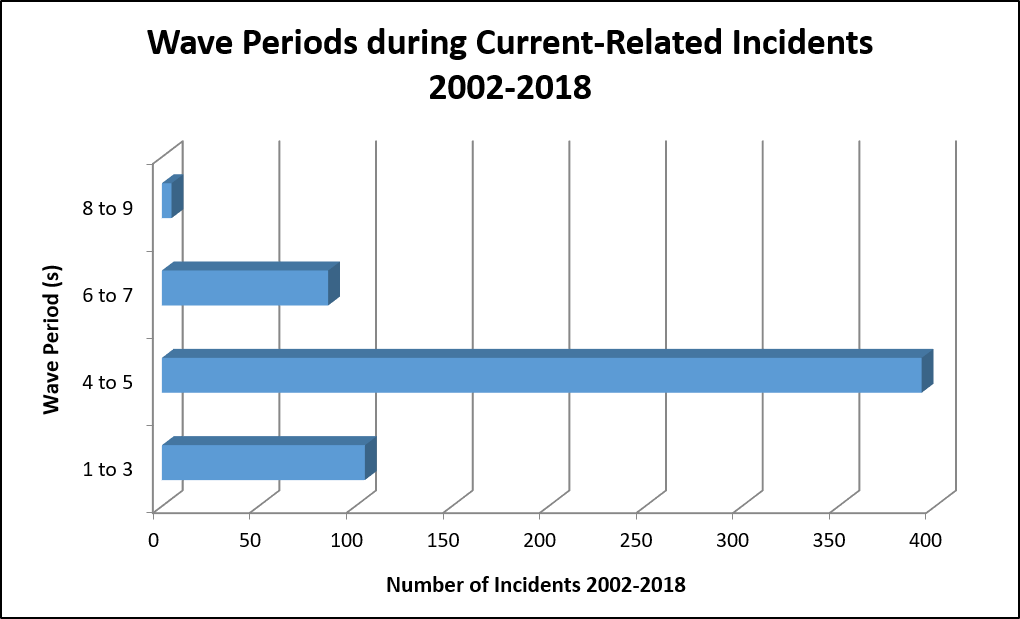 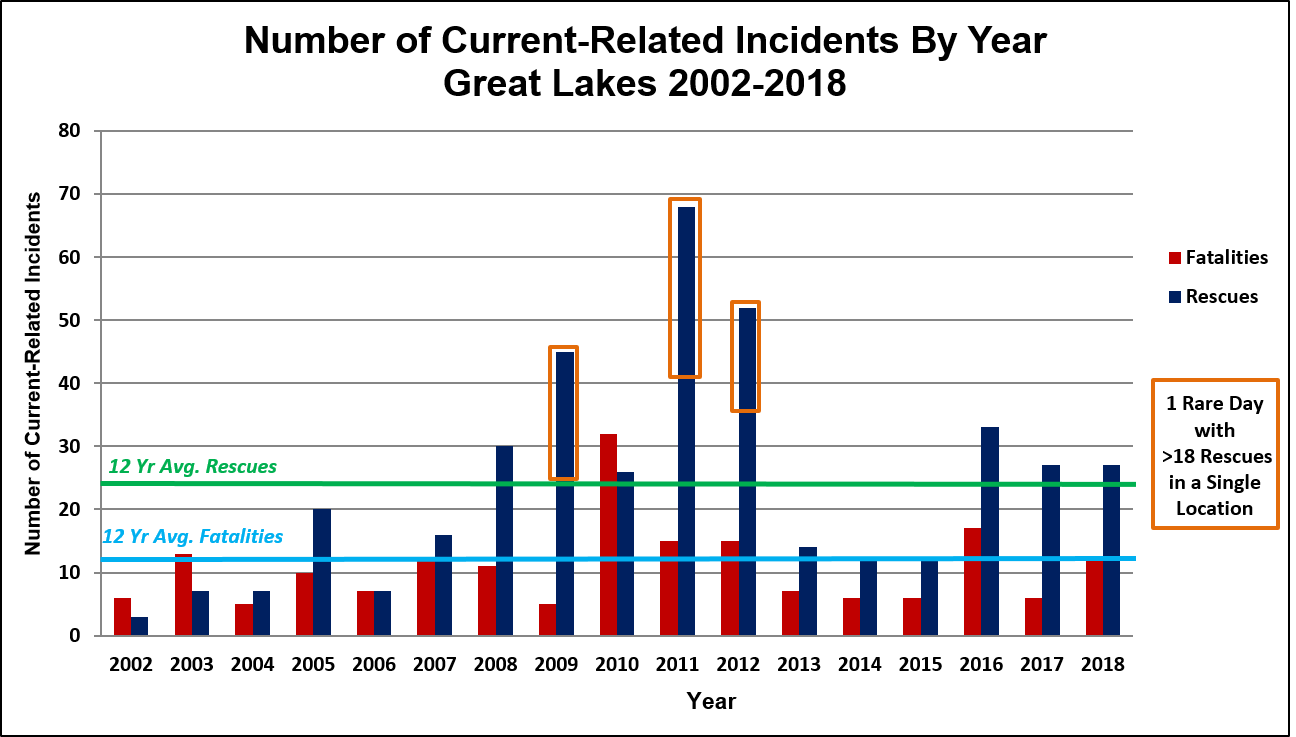 Can You Tell if There’s Danger Lurking?

Strong winds can change quickly and produce severe conditions on any of the Great Lakes — severe enough to sink even large ships. For example, some wave heights can reach more than 23 feet (7 meters). Such extreme events cause waves so high, most people know to stay out of the water. But what if the waves are 3 to 5 feet tall? While the lower waves may seem more inviting, they can often relate to areas where dangerous currents may be present. 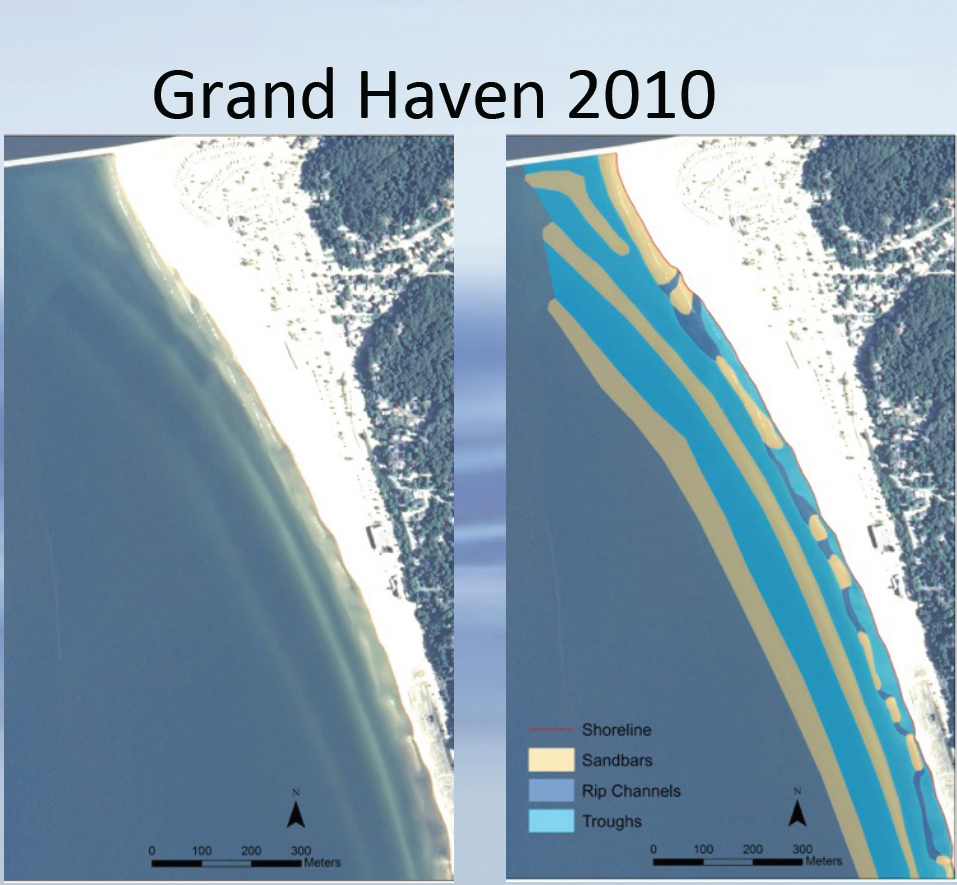 Rip currents and other dangerous currents often form in or near the “surf zone” which typically is where people are swimming.

As seen in the image to the right (provided by Guy Meadows, a rip current researcher based at Michigan Technological University), currents happen in what is called the “surf zone.” They can also show up when the waves are not too high, 3-4 feet, but approaching the shore quickly. Currents in the Great Lakes can be particularly treacherous because Great Lakes storms and waves can build with alarming speed, giving a swimmer in trouble less time to recover between waves.

Some beaches have a sign system to signal when the conditions may be ripe for dangerous currents. Yet, every year, people die because they ignored warnings, like yellow or red warning flags and water safety signs. Please pay attention to the signs!

The short answer: You are.

The longer answer: Any swimmer can get caught in a current. However, according to National Weather Service statistics, between 2002-2013 a high percentage of the rescues and fatalities involved young males (aged 24 and under). Of the 21 rescues and recoveries that took place in 2013, 11 were for males, while 7 were females and 3 the sex was not reported.

Since 2002, nearly 600 incidents directly related to dangerous currents have been collected. As of 2013, an estimated 47 percent of those incidents included males, while only 22 percent included females and in 31 percent of the incidents, the sex of the victim was not reported.

Research has shown that younger males may be more at risk because of their involvement in higher-risk situations and the influence of peer pressure, like jumping off of piers and breakwalls. Structures present multiple hazards, like rocks and persistent currents that often prevent swimmers from reaching safety.

While younger males may be at the top of the risk pyramid, other statistics stand out as well. For example, many of the rescues and fatalities can be older adults, who have gone in the water to help save a child. Children are also at risk. This can be further explored in the activity below: Who is Drowning in the Great Lakes?

People drown when they are unable to keep themselves afloat and get to safety or wait for help. Often a combination of fear, panic, exhaustion and lack of swimming skills contribute to death or near drownings. However, as noted at the beginning of this lesson, even experienced swimmers can get into trouble, depending on the conditions at the time.

Summary: Students explore and discuss how to recognize the signs of drowning and how to help someone else.