Mixed-bag catches are common in nearshore waters, but you might need to look closely to correctly identify your catch. 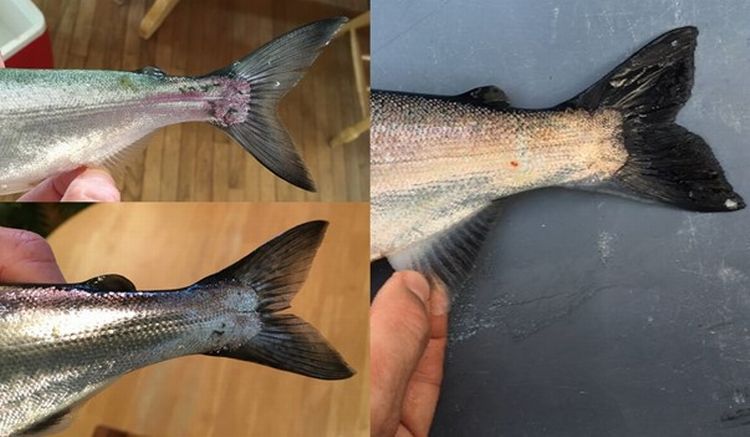 April offers some fantastic fishing for salmon and trout. Pier, small boat, and surf fishing can be especially productive at this time of year since the shallows warm more quickly than offshore waters. Brown trout are a popular target at many northern and central Lake Michigan ports, while coho salmon are a big draw farther south. On Lake Huron, Atlantic salmon are becoming a popular target following the expansion of stocking efforts in recent years.

Anglers on both lakes have been contributing to community science efforts including the Huron-Michigan Predator Diet Study and Great Lakes Angler Diary. For both of these projects, it is very important to correctly identify what species of fish you have caught. Spring fishing offers special challenges since brown trout are easily confused with Atlantic salmon, and small Age 1 Chinook salmon can be mistaken for cohos.

To add to the confusion, tail spotting is not fully developed in small salmon. Adult Chinook salmon have spotting on both lobes of the caudal fin, while coho salmon typically have spots only on the upper lobe (although spotting on both lobes is sometimes seen in coho, as well). Small Age 1 Chinook salmon have deeply forked, unspotted tails that gradually develop into square, spotted tails as they grow (see photos).

A more definitive characteristic for all seasons is the pattern of teeth in the middle of the roof of the mouth. Atlantic salmon have a single, straight row of poorly-developed vomerine teeth while brown trout have two staggered rows of vomerine teeth (see photo). 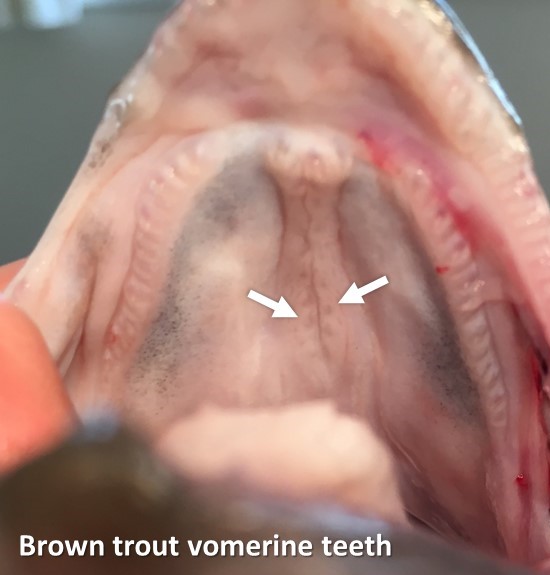 Michigan Sea Grant has a brochure and video that go into more detail on salmon and trout ID, along with a printable fact sheet for quick reference.