When discussing precipitation and runoff in your class, it’s helpful to first explain water flow and to describe your watershed. A watershed is an area of land that drains into a river system. Any water entering a watershed, usually as precipitation, travels from higher elevations to lower elevations. As the water moves downward, it forms streams and rivers. The channeling and pooling of water is determined by the shape or topography of the land.

One way to introduce the term watershed is to ask students to separate the word into “water” and “shed” (to pour or cause to pour off; to emit) and discuss what each word means.

Water continues to move downward, and rivers may join with larger lakes (e.g., the Great Lakes) or other larger rivers as they head toward the ocean.

The diagram below shows how water flows through the connecting channels of the Great Lakes, through the Saint Lawrence Seaway and to the Atlantic Ocean. 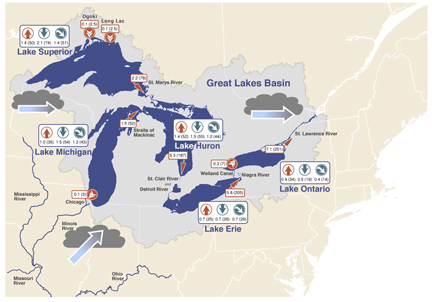 Variables in the Data Sets

Water Surface Temperature:
The exact measurement of water surface temperature ranges from simple thermometer readings at specific depths to ultra-sophisticated satellite infrared radiometer indirect methods. Whatever method is used, the temperature of a lake over time can tell us many things. Living organisms and plants have preferred ranges of temperatures in which they thrive, grow and reproduce. Any alteration from this can affect their survivability and change the ecosystem where they grow.

A change in temperature will also have an effect on the water chemistry of a lake. Generally, when the temperature increases, the rate of chemical reactions also increases. This affects metabolic rates of cold-blooded animals, as well as growth and reproduction of simple organisms and plants. However, the warmer the water, the less oxygen it can hold. This in turn can affect the life in the lake.

Thermal Stratification:
Lakes are subject to thermal stratification, layers of water with different temperatures and different concentrations of oxygen. Cold water is denser than warm water, causing the cold water to sink. In warmer months, the surface layers of a lake are heated and the mixing of the atmospheric gases causes an increase in the water’s oxygen content. The lower layers are colder. As autumn approaches, the surface layers become cooler and, in turn sink, displacing the lower layers. The water turns over and mixes. This is called fall turnover. A similar process happens in the spring, referred to as spring turnover. Thermal pollution — an influx of hotter or colder water — from municipal and industrial discharges in urban areas can cause changes to water temperatures and oxygen content.

Monthly Mean Overland Air Temperature:
The monthly mean overland air temperature refers to the average of the air temperature over the land. The atmospheric temperature has a direct effect on the surface temperature of bodies of water. Examining these trends can provide clues as to the effects of global climate changes.

Monthly Evaporation:
The variation in the amounts of lake evaporation affects the heat content, or amount of heat energy stored, in bodies of water. Evaporation is one way that heat can be lost from lakes. Maximum evaporation occurs when the water temperature in the Great Lakes is much warmer than the air moving across them. This occurs particularly in the fall before the lakes have a chance to develop an ice cover.

Monthly Runoff to Lake from Land Surface:
Surface runoff is the water flow, which occurs when soil is saturated with water and the excess flows into the lake in this case (specific to the data set). The water can come from rain, snowmelt and drainage from industrial and municipal sources. The runoff can pick up various contaminants along the way, such as petroleum, pesticides and animal waste, are common contaminants in the Huron River watershed in Ann Arbor.

River Flows:
Measuring the flow of a river or stream is another aspect of not only water management but also hazard management, environmental research and infrastructure design. It is measured in four steps:

Diversions to Canals:
A diversion is any transfer of water across watershed boundaries through a man-made pipeline or canal. Diversions supply a steady stream of water for energy production, irrigation, commercial shipping, recreation, municipal water supplies and flood prevention. Diversions can transfer water in to or out of the Great Lakes basin. Due to the natural drainage of water from north to south in Lake Michigan, many canals are located in the Chicago area and help regulate water flows that could overtake the area.